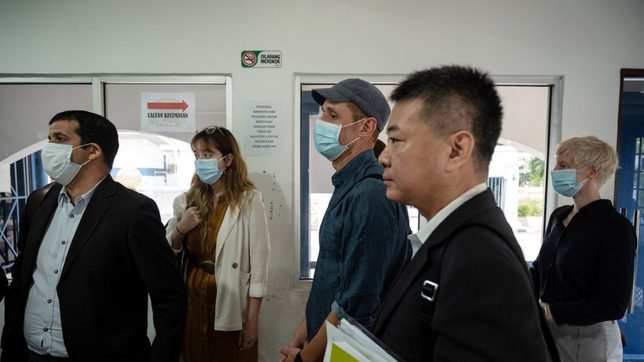 Australian Al Jazeera journalists, reporter/senior producer Drew Ambrose (L), cameraman Craig Hansen (C) and producer Jenni Henderson (R), involved in a documentary about the arrests of undocumented migrants, arrive at the Bukit Aman police headquarters in Kuala Lumpur on July 10, 2020. - Malaysian police said on July 9 they are investigating an Al Jazeera documentary about the arrests of undocumented migrants during the coronavirus lockdown after officials denounced it for damaging the country's image. (Photo by Mohd RASFAN / AFP) / The erroneous mention[s] appearing in the metadata of this photo by Mohd RASFAN has been modified in AFP systems in the following manner: [removing reference to Al Jazeera executive producer Sharon Roobol as she is obscured in this frame]. Please immediately remove the erroneous mention[s] from all your online services and delete it (them) from your servers. If you have been authorized by AFP to distribute it (them) to third parties, please ensure that the same actions are carried out by them. Failure to promptly comply with these instructions will entail liability on your part for any continued or post notification usage. Therefore we thank you very much for all your attention and prompt action. We are sorry for the inconvenience this notification may cause and remain at your disposal for any further information you may require.

Facebook Twitter Copy URL
Copied
The current law regulating video making in Malaysia dates back to 1981, and is a broad piece of legislation that officially requires anyone producing a video to get a license from a government agency

Malaysia on Thursday, July 23, said a license would be required to make any video in the country, even those posted on social media platforms like TikTok, sparking a storm of criticism.

Critics slammed it as the latest move by authorities to silence dissent and independent media – while others jokingly posted clips of cats, asking if they needed official permission.

The announcement was triggered by a row with Al Jazeera over a documentary made in Malaysia, which has infuriated officials and for which they claim the Qatar-based broadcaster did not get the necessary license.

Al Jazeera insists it did not need one for the program.

Observers said such broad enforcement of the rules would be impossible, however, and the opposition accused the government of trying to use outdated legislation to stifle criticism.

The current law regulating video making in Malaysia dates back to 1981, and is a broad piece of legislation that officially requires anyone producing a video to get a license from a government agency.

Some were amused more than outraged by the announcement, however, trolling Saifuddin and posting mocking videos.

Alongside a clip of his pet cat, one Twitter user commented: “Just letting you know that I do not have a… license to publish this film.”

The Al Jazeera documentary focused on the plight of migrant workers in Malaysia but it angered the government.

Six of the broadcaster’s journalists, including 5 Australians, were called in for police questioning this month.

Concerns have been growing in Malaysia about worsening media freedom since a reformist government collapsed and a scandal-plagued party seized power in March. – Rappler.com