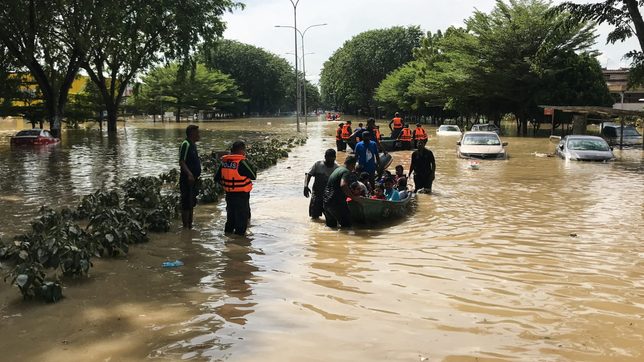 Facebook Twitter Copy URL
Copied
Authorities have been criticized by the public and lawmakers for their slow response, with some people trapped by floodwaters for more than two days before being rescued, particularly in Selangor

KUALA LUMPUR, Malaysia – Malaysia on Tuesday, December 21, warned of more storms and heavy rainfall in the coming days as Prime Minister Ismail Sabri Yaakob admitted to weaknesses in the government’s response to flooding that has led to more than a dozen deaths and the displacement of over 60,000 people.

The country mobilized its army and other security agencies after torrential rain that began last Friday, December 17, which caused floods in eight states.

Authorities have been criticized by the public and lawmakers for their slow response, with some people trapped by floodwaters for more than two days before being rescued, particularly in Selangor, the country’s wealthiest and most populous region.

The prime minister on Tuesday acknowledged weaknesses in coordinating the response by federal security agencies, according to a broadcast on state-run news channel Bernama TV. “I don’t deny (the weaknesses) and will improve in the future,” Ismail Sabri said.

“The responsibility is not that of the federal government alone, but also the state governments, and the frontliners are the districts.”

The Meteorological Department said Malaysia could see more floods in the coming days, as a tropical depression moved towards four states in Malaysia’s north.

“This situation can cause continuous rainfall and strong winds in the northern states…. that could lead to flooding in low-level areas,” the department said in a statement.

The death toll from the floods in Selangor climbed to 17 on Tuesday, while more than 30,000 people have been moved into temporary shelters, the state’s Chief Minister Amirudin Shari said in a statement.

The national disaster management agency said nearly 63,000 people were displaced across the country as of Tuesday. – Rappler.com