Malaysian Prime Minister Muhyiddin Yassin blamed “undocumented migrants” for the recent spike of COVID-19 cases in Sabah, as he also admitted that the recent Sabah election worsened the coronavirus surge.

Muhyiddin, in a live broadcast on Tuesday evening, October 6, explained that Malaysia’s new coronavirus numbers “are tied with cases in Sabah and Kedah.”

“In Sabah, a big part of the reason for the infections is due to the entry of ‘undocumented migrants’ from neighboring countries. Some of them are COVID-positive,” the Malaysian prime minister said in his speech, translated into English by Malay Mail.

“When caught and sent to the detention centers, they infect others as well as prison staff, their families, and the local community,” he added, even as he drew flak for remarks that critics said can heighten xenophobia in Malaysia.

The Straits Times reported on Tuesday that a coronavirus outbreak was traced to a Sabah detention center that “houses illegal immigrants from the Philippines and Indonesia.”

Rappler has sought the Philippine embassy in Malaysia for more information about the recent spike in Sabah, such as whether Filipinos were among those infected there. The embassy has yet to reply to our messages via email and Facebook Messenger as of posting time.

As he blamed undocumented migrants, Muhyiddin also said the recent Sabah election is one of the reasons for Malaysia’s rise in coronavirus cases. The Malaysian leader, however, justified the Sabah election as “inevitable” because it is supposed to be conducted 60 days after the state legislative assembly is dissolved. “It cannot be delayed,” he said.

Sabah is a territory claimed by the Philippines but controlled by Malaysia. While largely dormant, the Sabah dispute is revived once in a while by triggers ranging from a 2013 Sabah standoff instigated by a self-proclaimed Sultan of Sulu, to a controversial July 27 tweet of Philippine Foreign Secretary Teodoro Locsin Jr. 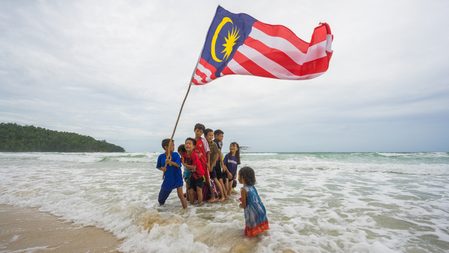 Muhyiddin’s statements come as Malaysia on Tuesday reported a record-high number of 691 new coronavirus cases bringing the country’s coronavirus numbers to 13,504. Of this total, 141 people died of COVID-19.

Among 10 countries in the Association of Southeast Asian Nations, Malaysia has the 5th highest number of coronavirus cases as of Tuesday. The Philippines is number one, followed by Indonesia, as both countries employ militarized approaches in fighting the virus. – Rappler.com