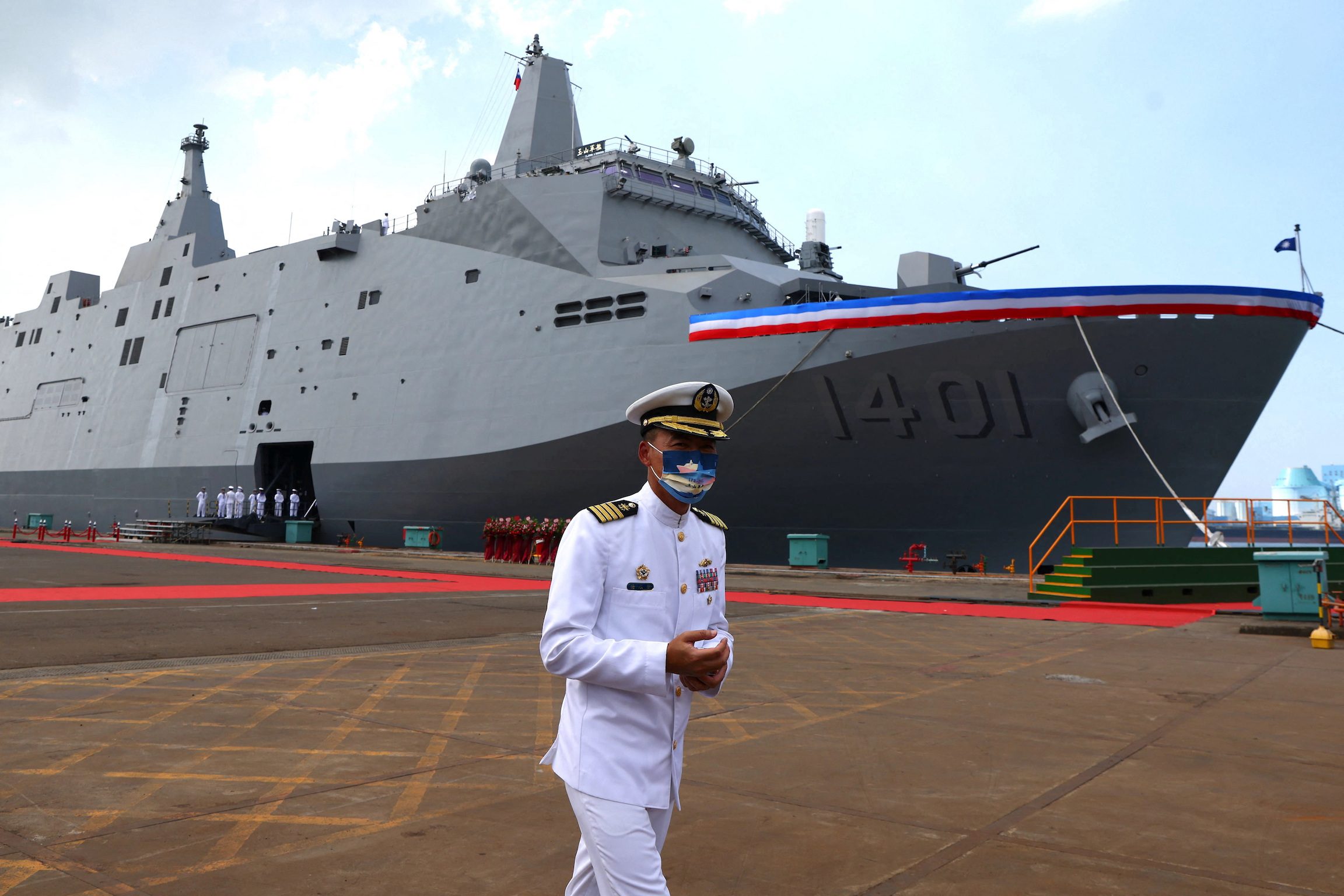 A Navy officer takes part in a delivery ceremony for the Navy's Yushan amphibious landing dock in Kaohsiung, Taiwan, September 30, 2022.

Facebook Twitter Copy URL
Copied
While Taiwan is spending billions of dollars on new warships, submarines, missiles and fighter jets, much of the equipment now in service is decades-old

TAIPEI, Taiwan – The stepped up intensity of Chinese naval patrols near Taiwan since August is putting a “heavy burden” on the island’s aging frigate fleet, which is struggling to maintain combat readiness, the Taiwanese defense ministry said on Tuesday, October 11.

China, which claims democratically ruled Taiwan as its own territory, carried out war games near the island in August responding to a Taipei visit by US House speaker Nancy Pelosi, and has maintained an increased military presence since then.

While Taiwan is spending billions of dollars on new warships, submarines, missiles and fighter jets, much of the equipment now in service is decades-old, presenting a huge challenge in dealing with China’s military activities.

In a report to parliament seeking budget approval for a new class of frigate, Taiwan’s defense ministry said that the number of Chinese ships regularly patrolling in waters close to Taiwan had doubled to between four and five a day.

China had expanded the area in which the ships operate from “time to time” patrols in the Taiwan Strait to regularly sending them into the waters off southwest and northern Taiwan, it said.

“The navy must send corresponding forces to monitor every day, and send additional forces to respond depending on the threat level, which is causing a heavy burden on some older ships.”

Taiwan’s navy only has 26 main combat ships, including six Chi Yang-class frigates that have been in operation for three decades, have old equipment and are increasingly hard to maintain safely, the ministry said.

“At present, they are struggling to maintain proper equipment and perform various combat readiness tasks.”

China’s navy is the largest in the world, according to the US Department of Defense, including two aircraft carriers already in service and a third launched in June, and overall is expected to grow to 460 ships by 2030.

The Chi Yang-class frigates were built by the United States in the 1970s and commissioned by Taiwan in 1992. The US Navy retired the ships, which it calls the Knox-class, in 1994.

Taiwan’s defense ministry said they are building a new class of anti-submarine frigate and anti-aircraft frigate, but the earliest the first vessels will be in service is 2025.

The ministry did not say how many such new ships Taiwan is planning to build beyond 2025.

It said the new frigates of about 2,000-tons would be similar to their Chinese counterparts in size and more adaptable to react to the regular presence of Chinese ships near Taiwan, which include China’s Type 056 corvettes and Type 053H3 frigates. – Rappler.com