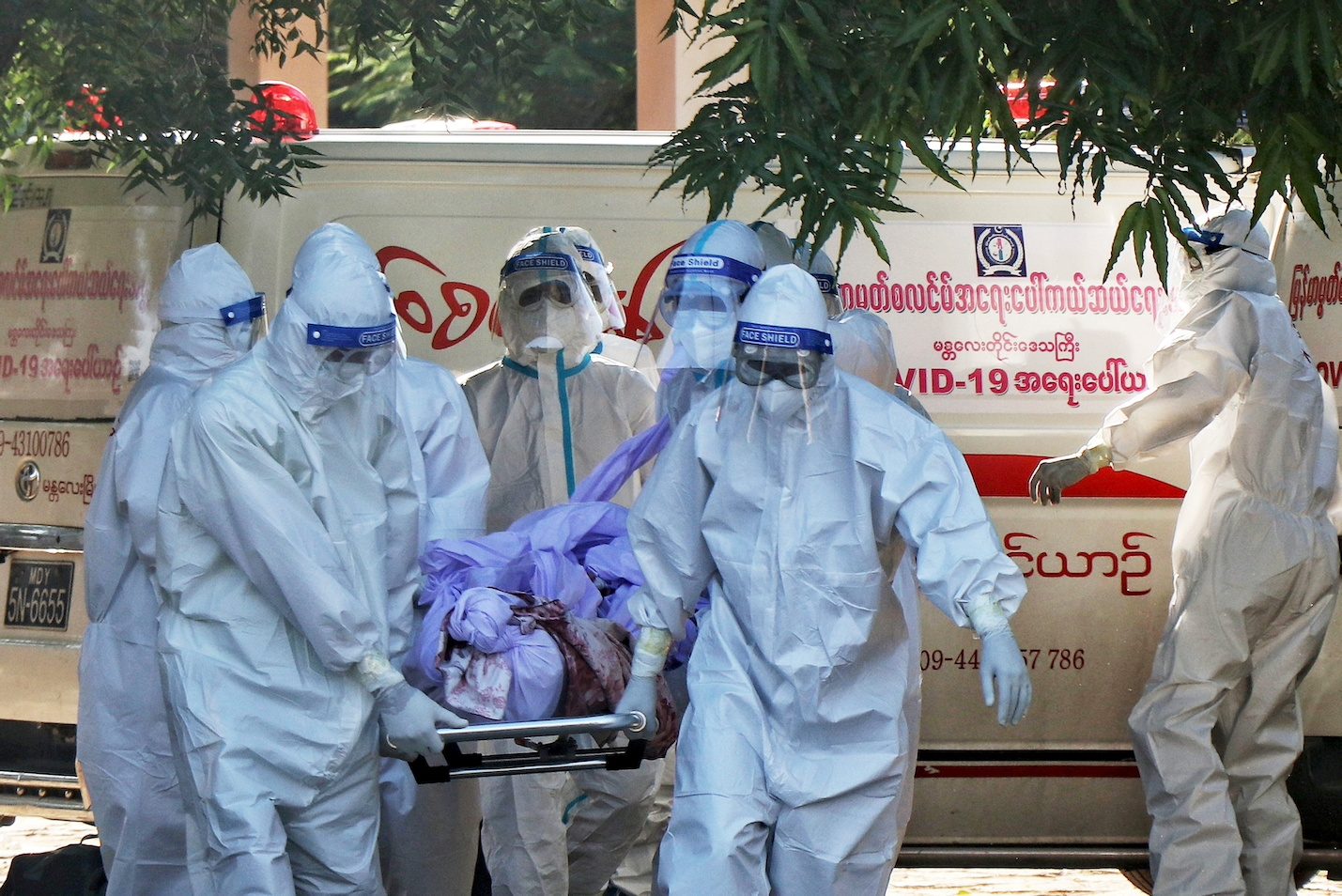 SENSITIVE MATERIAL. THIS IMAGE MAY OFFEND OR DISTURB Volunteers carry bodies of people who died due to the coronavirus disease (COVID-19), during their funeral at a cemetery in Mandalay, Myanmar July 14, 2021.

Facebook Twitter Copy URL
Copied
The number of funerals at the Yay Way cemetery in Myanmar's biggest city, Yangon, is around 200 per day over the past week, well over double the number that would normally be expected, says the funeral services

Hundreds more bodies than usual are being taken for funerals every day in junta-ruled Myanmar as a new wave of COVID-19 sweeps through the country, services transporting the bodies and arranging ceremonies said.

The accounts from different parts of Myanmar point to the daily death tolls being higher than those given by the health ministry, which hit a record 145 fatalities on Wednesday, July 14.

Reuters was unable to reach either the health ministry or a junta spokesman for further comment on the figures.

The number of funerals at the Yay Way cemetery in Myanmar’s biggest city, Yangon, was around 200 per day over the past week, well over double the number that would normally be expected, funeral services said.

There were similar increases at two other cemeteries in the city with 400 to 500 people being cremated there per day, they said. “We have to transport the dead bodies to different cemeteries. We are making more than 40 trips a day,” said Bo Sein, 52, who operates a charity service transporting bodies.

“Seeing the dead bodies at the cemetery today, I was thinking that it will not be easy to continue like this. The rich and the poor, all died of COVID,” said Bo Sein, who himself kits up in protective equipment to transport the bodies.

The founder of another free funeral service in Yangon, who declined to be named for fear of retribution, said he had called for volunteers because his 18 team members could no longer cope.

Pictures from Yay Way cemetery showed bodies being queued up for cremation.

In Myanmar’s second city of Mandalay, an official from the Aye Yeik Nyein cemetery said 63 bodies had been cremated there on Tuesday. All were suspected COVID-19 cases while other cemeteries handled deaths from other causes, he said.

“We are worried, but we need to serve the people,” the official, Kyaw Soe Win, told Reuters by phone.

Coronavirus cases started to rise in Myanmar in June, and have soared in the past two weeks, with a record 7,089 infections reported on Wednesday.

According to official figures, there have been more than 208,000 infections and 4,181 deaths in the country since the start of the pandemic.

A spokesman for the military authorities said on Monday that they were doing all they could to bring the pandemic under control and appealed to Myanmar’s people and charity groups for cooperation.

Around one in three tests recently has been positive compared to the 5% that the World Health Organization has said shows an outbreak is being brought under control. The rate briefly rose above 20% last year as Suu Kyi’s government brought a second wave of infections under control.

Many medics have joined a Civil Disobedience Movement, stopping work at state hospitals in protest at the coup. – Rappler.com