Facebook Twitter Copy URL
Copied
MRTV in its nightly news bulletin shows Suu Kyi, 75, in the dock sitting upright with her hands in her lap and wearing a surgical mask

Myanmar’s state television on Monday, May 24, aired pictures of ousted leader Aung San Suu Kyi for the first time since a military coup nearly four months ago, showing her first in-person court appearance since her arrest.

MRTV in its nightly news bulletin showed Suu Kyi, 75, in the dock sitting upright with her hands in her lap and wearing a surgical mask.

Beside her was ousted President Win Myint and another defendant, former Naypyitaw mayor Myo Aung, as two police officers stood behind them.

Suu Kyi looked in good health during a 30-minute meeting with her legal team, but said she had no access to newspapers in detention and was only partially aware of what was happening outside, her legal team head, Khin Maung Zaw, told Reuters.

“This image breaks my heart,” said one Twitter user identified as Nay Win Aung, in one of a series of similar posts reacting to the pictures of Suu Kyi in court.

Another user, Su Mon Hlaing, said: “I love Mother Aung San Suu Kyi, we stand with our leaders, we want our country back.”

Nobel laureate Suu Kyi, for decades the figurehead of Myanmar’s struggle for democracy, is among more than 4,000 people arrested since the February 1 coup.

The latest include an American journalist Danny Fenster, 37, who was detained on Monday as he tried to board a flight out of Myanmar, his news organization said. Suu Kyi is being prosecuted in cases in two courts, for offenses that range from illegally possessing walkie-talkie radios to violating a state secrets law, punishable by 14 years in prison. The military has also accused her of taking bribes. 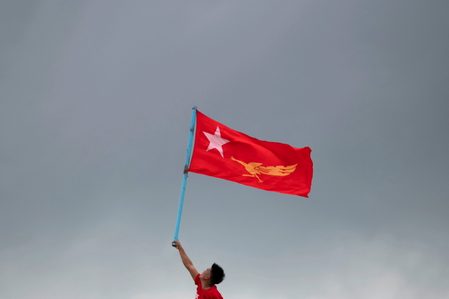 Myanmar has been in chaos since the army took power on February 1, with daily protests, marches, and strikes nationwide against the junta, which has struggled to impose order as opposition against it grows.

It has responded with lethal force, killing more than 800 people, according to the Assistance Association for Political Prisoners activist group.

Suu Kyi “wished people good health” in her meeting with her lawyers and also made a reference to her National League for Democracy (NLD) party that could be dissolved soon.

“Our party grew out of the people so it will exist as long as people support it,” Khin Maung Zaw quoted Suu Kyi as saying.

The presiding judge adjourned the session until June 7, the lawyer said.

Myanmar’s junta-appointed election commission will dissolve the NLD on the grounds that its victory in a November election was secured by fraud, media reported on Friday, quoting a commissioner, who threatened action against “traitors.”

The accusations had been dismissed by the former election commission.

Suu Kyi said the only information she received from outside was when police asked her opinion on some matters, said Khin Maung Zaw. She refused to respond because she was unaware of the full situation, he said.

In his first interview with foreign media since the coup, junta leader Min Aung Hlaing had also said Suu Kyi was in good health.

Min Aung Hlaing also told Hong Kong-based Chinese language broadcaster Phoenix Television that about 300 people had been killed in the unrest, including 47 police.

The military is fighting on a growing number of fronts, against established ethnic minority armies, and rag-tag local militias formed in the past few weeks, many armed with rudimentary rifles and home-made weapons.

Fighting has intensified in eastern Myanmar in recent days near the border of Southern Shan and Kayah states, with thousands fleeing their homes and dozens of security forces and local fighters killed, according to residents and media reports.

Local people and activists estimated at least 10,000 people had fled their homes in Kayah, bordering Thailand, after the latest violence.

“They fled into nearby forests or nearby villages where their relatives live. We don’t have an organized group to help,” said an activist, who asked not be identified.

Other residents said there was an immediate need for humanitarian aid including food, shelter, and medicine, with pregnant women, children, and the elderly among the displaced.

On Monday, a resident in Loikaw said shooting could still be heard and several military planes landed at an air base, after tanks and helicopters were patroling the area a day earlier.

On the northwestern side of Myanmar, bordering India, 12 police officers in the Chin State town of Kanpetlet had switched sides on Saturday to join the fight against the coup, Myanmar Now quoted the local militia, the Chinland Defense Force (CDF), as saying.

Coup leader Min Aung Hlaing played down the risk of violence spiraling into a bigger conflict.

“I don’t think there will be a civil war,” he told Phoenix in the May 20 interview. – Rappler.com