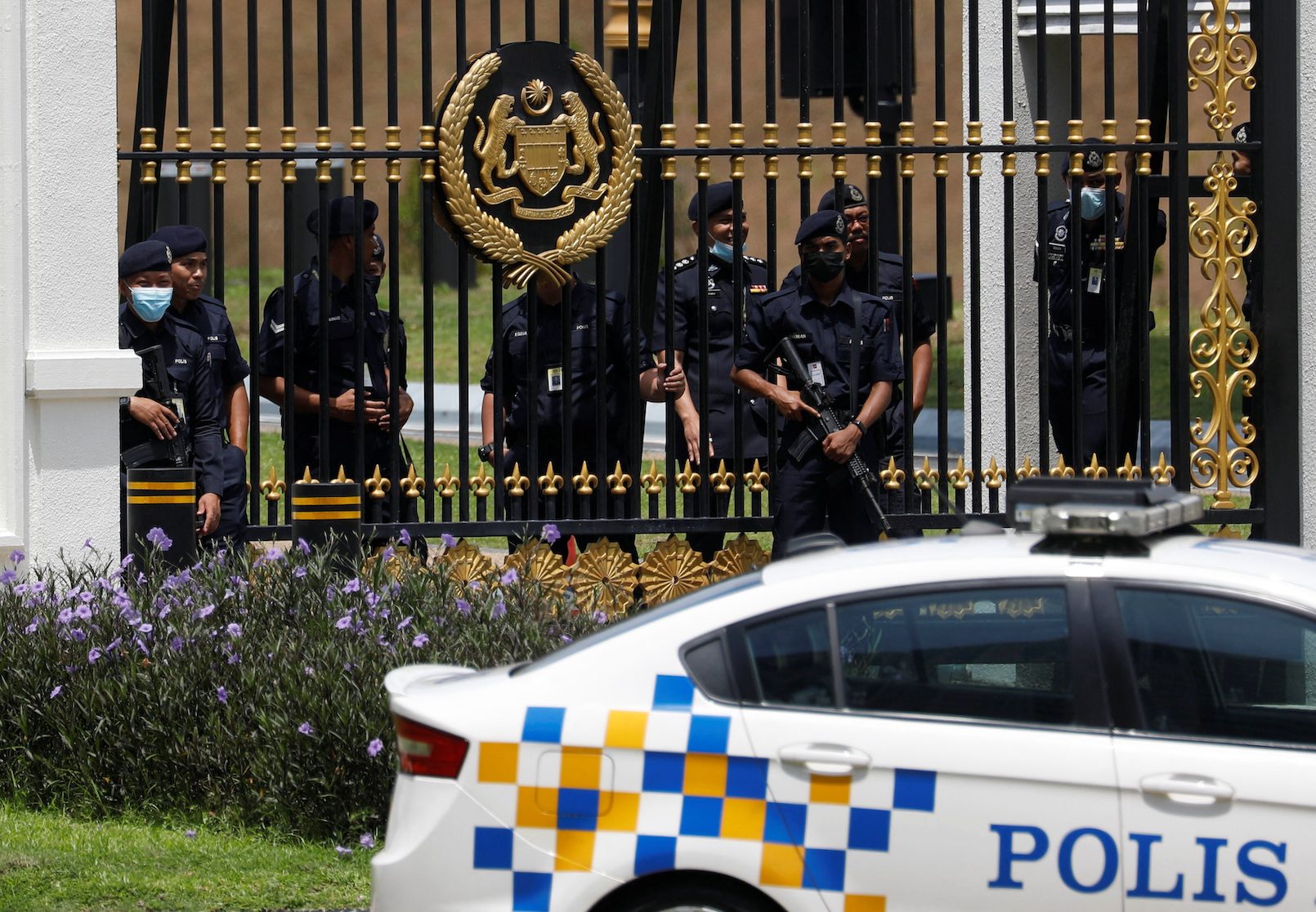 Policemen stand guard at the entrance of National Palace as the supporters of former Malaysian Prime Minister Najib Razak gather to handover a memorandum against Najib's jail sentence in Kuala Lumpur, Malaysia August 24, 2022.

KUALA LUMPUR, Malaysia – Supporters of former Malaysian prime minister Najib Razak petitioned King Al-Sultan Abdullah to pardon the disgraced politician, a day after he was jailed for corruption linked to the multi-billion-dollar scandal at a state investment fund.

About 200 loyalists gathered outside the national palace on Wednesday afternoon, August 24, to hand in a request for an immediate pardon for Najib, who led the country for nine years until 2018.

“I would like to request for a full pardon to be given immediately to this person who has served honorably,” said Syed Mohammad Imran Syed Abdul Aziz, the president of the group that
organized the protest. “His service and contributions have been torn apart in a humiliating way,” said Syed, who is also a member of the ruling United Malays National Organisation (UMNO).

On Tuesday, the country’s top court rejected Najib’s final appeal and upheld a 12-year jail sentence and a guilty conviction for illegally receiving around $10 million from a unit of 1Malaysia Development Berhad (1MDB).

He is being held at Kajang – a sprawling prison complex southeast of the capital that holds up to 5,000 prisoners, including convicted murderers and drug traffickers.

But he will be back in court on Thursday to face other charges related to 1MDB, in a scandal that has implicated financial institutions and high-ranking officials worldwide.

Keeping a tight grip on power, Najib had been able to suppress local investigations into corruption at 1MDB until his election defeat in 2018, when voters showed their anger over the missing billions.

Until that point, UMNO had led every multi-ethnic coalition government in the more than six decades since independence from British colonial rule.

The party returned to power last year under the leadership of Prime Minister Ismail Sabri Yaakob, but it remains riven by competing factions, and there is no indication that Najib can count on any political favor.

Najib could apply for a pardon, which Malaysia’s king has the power to grant, though he could seek advice from his prime minister before taking such a step.

And the petitioners on Wednesday also requested Prime Minister Ismail to press the case for a royal pardon.

A son of Malay nobility, Najib is believed to be close to some sultans – Malaysia’s traditional rulers who take turns to be the country’s monarch in a unique rotational system – and he hails from Pahang, the same state as the current king.

Najib back in court

Investigators have said some $4.5 billion was stolen from 1MDB – co-founded by Najib during his first year as prime minister in 2009 – and that over $1 billion went to his personal bank accounts.

Deputy public prosecutor Mohd Mustafa P Kunyalam said Najib will be back in court on Thursday to face a second trial over 1MDB.

The hearing is part of the biggest case Najib faces over corruption at 1MDB. He is charged with 21 counts of money laundering and four counts of abuse of power for allegedly receiving illegal transfers of at least 2.3 billion ringgit ($512.93 million) between 2011 and 2014.

Najib also faces three other cases, and they all carry jail terms and heavy financial penalties.

The former premier has pleaded not guilty to all the charges, and has said he was misled by 1MDB officials.

US returns $460 million in recovered 1MDB funds to Malaysia