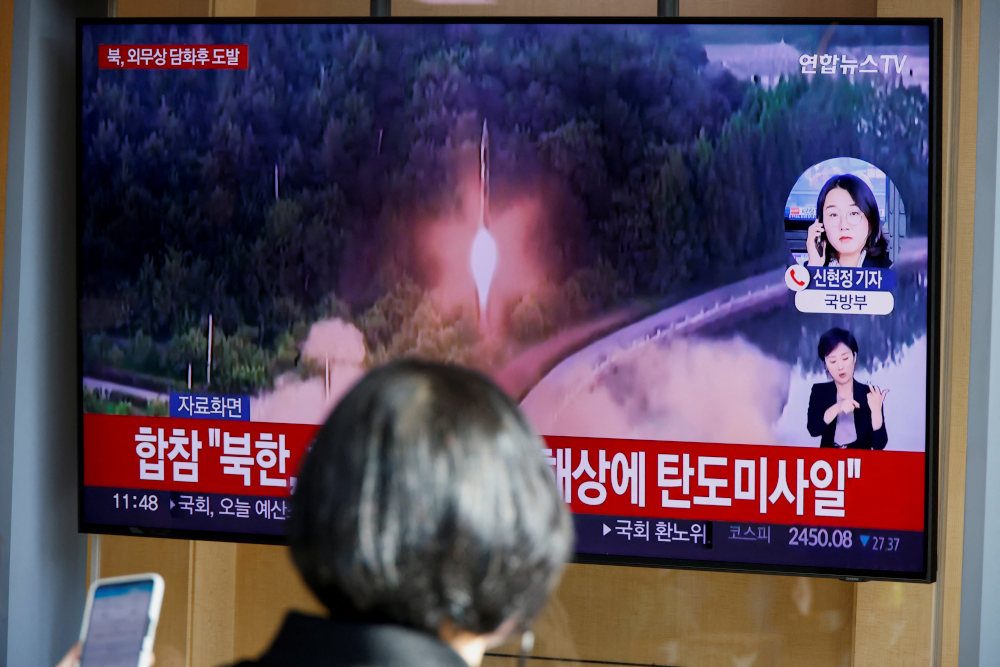 ON THE NEWS. A woman watches a TV broadcasting a news report, on North Korea firing a ballistic missile off its east coast, in Seoul, South Korea, on November 17, 2022.

SEOUL, South Korea – North Korea fired a ballistic missile on Thursday, November 17, as it warned of “fiercer military responses” to US efforts to boost its security presence in the region with its allies, saying Washington is taking a “gamble it will regret”.

South Korea’s military said the ballistic missile was launched from the North’s east coast city of Wonsan at 10:48 am (0248 GMT). It was the latest in a record number of such tests this year, and the North also fired hundreds of artillery shells into the sea more recently as South Korea and the United States staged exercises, some of which involved Japan.

At the talks, US President Joe Biden reaffirmed a commitment to reinforce extended deterrence and defend the two Asian allies with a “full range of capabilities”, including nuclear weapons.

Choe said the three countries’ “war drills for aggression” failed to rein in the North but would rather bring a “more serious, realistic and inevitable threat” upon themselves.

“The keener the US is on the ‘bolstered offer of extended deterrence’ to its allies and the more they intensify provocative and bluffing military activities … the fiercer the DPRK’s military counteraction will be,” Choe said in a statement carried by the official KCNA news agency.

She referred to her country by the initials of its official name, the Democratic People’s Republic of Korea.

“The US will be well aware that it is gambling, for which it will certainly regret,” Choe added.

A spokesman for South Korea’s defense ministry said the trilateral summit and their cooperation on extended deterrence are aimed at countering the North’s nuclear and missile threats.

The United States has been saying since May that North Korea is preparing to conduct its first nuclear test since 2017, but its actual timing remains unclear.

Washington, Seoul and Tokyo said in a joint statement after the summit that Pyongyang’s nuclear testing would incur a “strong and resolute response.”

Choe said the North’s military activities are “legitimate and just counteractions” to the US-led drills.

“North Korea has also achieved some political effects by codifying its nuclear law in August, so it might not have immediate needs for a nuclear test,” Kwon said in an interview with Yonhap news agency released on Thursday. – Rappler.com