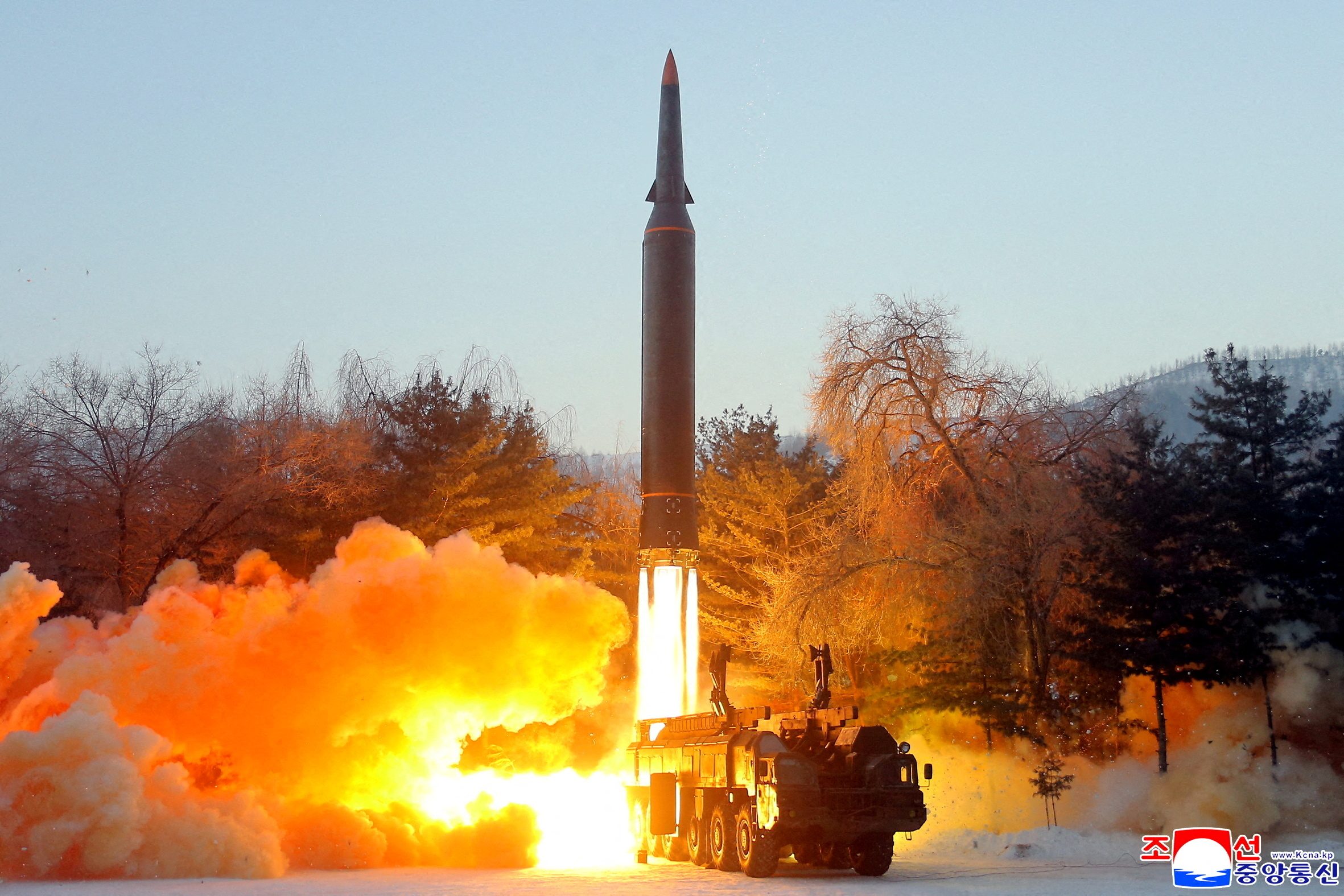 TEST FIRING. A view of what state news agency KCNA reports is the test firing of a hypersonic missile at an undisclosed location in North Korea, January 5, 2022, in this photo released January 6, 2022 by North Korea's Korean Central News Agency (KCNA).

South Korea’s Joint Chiefs of Staff reported that a projectile believed to be a single ballistic missile was launched at around 7:52 am (2252 GMT) from North Korea’s Jagang Province toward the ocean off its east coast.

South Korea’s National Security Council (NSC), which convened a rare emergency meeting presided over by President Moon Jae-in, said the test appeared to involve an intermediate-range ballistic missile (IRBM), which North Korea has not tested since 2017.

He noted that this month’s flurry of missile tests was reminiscent of the heightened tensions in 2017, when North Korea conducted multiple nuclear tests and launched its largest missiles, including some that flew over Japan.

North Korean leader Kim Jong Un has said he is no longer bound by that moratorium, which included a stop to nuclear weapons tests and was announced in 2018 amid a flurry of diplomacy and summits with then-U.S. President Donald Trump.

North Korea’s rulers suggested this month they could restart those testing activities because the United States and its allies had shown no sign of dropping their “hostile policies.”

“The United States condemns these actions and calls on (North Korea) to refrain from further destabilizing acts,” the US military’s Indo-Pacific Command said in a statement after Sunday’s launch.

A US State Department spokesperson said the launch demonstrates the threat posed by North Korea’s unlawful weapons of mass destruction and ballistic missile programs, and called on Pyongyang to engage in “sustained and substantive” dialogue. It is unclear if IRBMs were included in Kim’s moratorium, but those, too, have not been tested since 2017. South Korea’s JCS and Japanese Chief Cabinet Secretary Hirokazu Matsuno separately said the missile is estimated to have reached an altitude of 2,000km and flown for 30 minutes to a distance of 800km. IRBMs typically have ranges of 600 to 3,500 miles, while ICBMs have ranges exceeding 3,500 miles.

Missile experts said the data could indicate a test of an IRBM such as the Hwasong-12, which was last tested in 2017, or a new type.

“Regardless of whether it’s a IRBM or ICBM, this is a strategic missile of some sort and clearly not the same as the prior tests in the January 2022 test series to date,” George William Herbert, an adjunct professor at the Center for Nonproliferation Studies and a missile consultant, said on Twitter.

The launch could make January the busiest ever for North Korea’s missile program, which analysts say is expanding and developing new capabilities despite strict sanctions and United Nations Security Council resolutions that ban the country’s ballistic missile tests.

Its latest launches included a test of two short-range ballistic missiles and their warheads on Thursday, and an updated long-range cruise missile system tested on Tuesday.

The test comes less than a week before the opening of the Winter Olympics in Beijing, which is North Korea’s main political and economic partner. Pyongyang has said it would be skipping the Games because of the COVID-19 pandemic and “hostile forces.”

“Kim seems to be ramping up tests in bid to pressure both Washington and Beijing over sanctions just ahead of the Olympics,” said Uk Yang, research fellow at Center for Foreign Policy and National Security.

The tests would also appear to be the final nail in the coffin for Moon’s last-ditch push for a peace deal with North Korea before he leaves office in May, Uk added.

“It’s clear that North Korea is saying inter-Korean relations will need to start from scratch,” he said.

In an address ahead of the New Year, Kim Jong Un called for bolstering the military with cutting-edge technology at a time when talks with South Korea and the United States have stalled.

Since then, North Korea has tested a dizzying array of weapon types, launch locations, and increasing sophistication as denuclearisation talks remain stalled.

Jagang Province was the site of two launches this month of what North Koreasaid was a “hypersonic missile,” which could reach high speeds while flying and maneuvering at relatively low altitudes, but the ranges reported on Sunday were higher and farther than those earlier tests.

“The ballistic missile launch and the ones before it are a threat to our country, the region and the international community,” Matsuno said. “This series of launches violate U.N. resolutions and we strongly protest this action by North Korea.”

South Korea’s NSC condemned the launch as a violation of the resolutions and a challenge to international peace efforts, using stronger language than previous tests, when it typically expressed “strong regret.”

The tests appear aimed at modernizing North Korea’s military, bolstering national pride ahead of several major North Korean holidays, and sending a message of strength as the country grapples with economic crises caused by sanctions and COVID-19 lockdowns, said Leif-Eric Easley, a professor of international studies at Ewha University in Seoul.

“The Kim regime hears external discussions of its domestic weaknesses and sees South Korea’s growing strength,” he said. “So it wants to remind Washington and Seoul that trying to topple it would be too costly.”

Kim visited a munitions factory last week, where he called for “an all-out drive” to produce “powerful cutting-edge arms,” and its workers touted his devotion to “smashing … the challenges of the US imperialists and their vassal forces” seeking to violate their right to self-defense. – Rappler.com