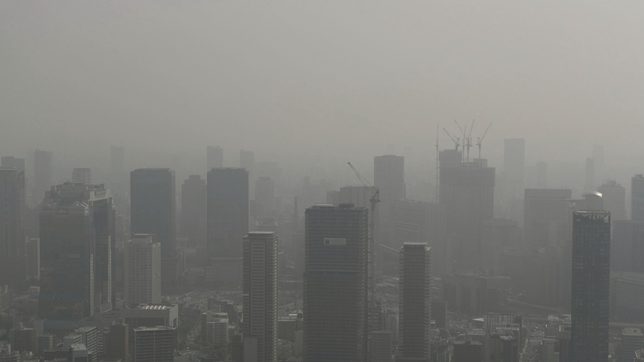 This aerial image taken from a Kyodo News helicopter shows the city of Osaka blanketed in a sandstorm, in this photo taken by Kyodo, Japan March 30, 2021.

Facebook Twitter Copy URL
Copied
An earlier lifting of the state of emergency is the most likely 'reason for the recent surge of cases in Osaka,' says a Kyoto University professor

A surge of COVID-19 cases in Osaka raises fears that the eastern Japanese metropolis, having emerged from a state of emergency a month ago, is entering a fresh wave of infections that could become the worst yet, its governor said on Wednesday, March 31.

“I expect that the number of infections in Osaka will soon exceed the previous record,” prefectural governor Hirofumi Yoshimura said in a televised briefing on Wednesday. “The mutant strains seem to be having an influence but it’s difficult to say scientifically and objectively what the extent is.”

Osaka and 10 other prefectures declared a state of emergency (SOE) in January amid Japan’s third and most-deadly wave of infections to date. All but the 4 prefectures that make up greater Tokyo lifted the measures early in February as cases and the burden on hospitals subsided.

An earlier lifting of the state of emergency is the most likely “reason for the recent surge of cases in Osaka,” Kyoto University professor Yuki Furuse said, stressing that he had not done a thorough investigation of the data yet.

Cases have also been trending higher in Tokyo, where 414 new infections were reported on Wednesday, which was still well below the peak of more than 2,000 per day.

Health experts have expressed concern about the spread of mutant virus strains, which may be more virulent and resistant to vaccines. A health ministry report last week showed 649 mutant cases had been discovered nationwide and at airports, with the biggest clusters in Osaka and nearby Hyogo prefecture.

Hyogo’s Kobe City conducted its own survey that showed that 15% of all new infections were of the British strain, much higher than expected. – Rappler.com