Lawmakers from Taiwan’s opposition Kuomintang (KMT) scuffled with members of the ruling Democratic Progressive Party (DPP) in parliament on Tuesday, September 28, and stopped the premier from addressing the assembly in a dispute over the COVID-19 pandemic.

The KMT has been demanding that Premier Su Tseng-chang apologize for his government’s handling of the coronavirus, especially quarantine lapses that might have led to a spike in cases beginning in May, though infections have since dropped back to at most a handful a day.

KMT lawmakers prevented Su from getting to a podium to take questions and then occupied it, though he did manage to speak briefly.

The KMT members then scuffled with DPP counterparts and threw things at the dais where deputy speaker Tsai Chi-chang was sitting. 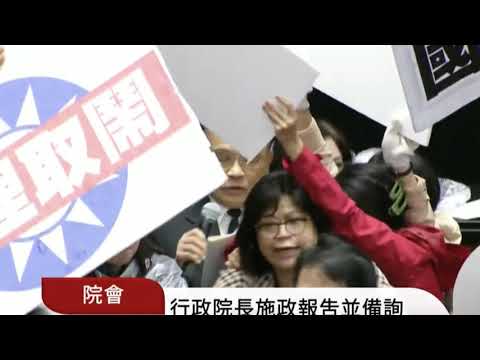 The DPP condemned the rowdy scenes and called on newly elected KMT leader Eric Chu, a former vice premier, to restrain his colleagues.

“Chairman Chu should lead the party’s legislators to use professionalism and rationality to ask questions and exercise supervision,” the party said.

Chu, in a Facebook post, said it was the DPP that was blame as its members had prevented the KMT from including questions about the pandemic on parliament’s agenda.

“The KMT’s occupation of the podium is to protect the right of the people to know what is going on,” Chu said.

Taiwan’s legislature does see unruly scenes from time to time and rivals have been known to punch each other. Last year, KMT legislators threw pig entrails in the assembly during a dispute over US pork imports.

Tuesday’s session was postponed mid-afternoon and it is not clear whether it would resume on Wednesday.

The DPP has a large majority in parliament. – Rappler.com