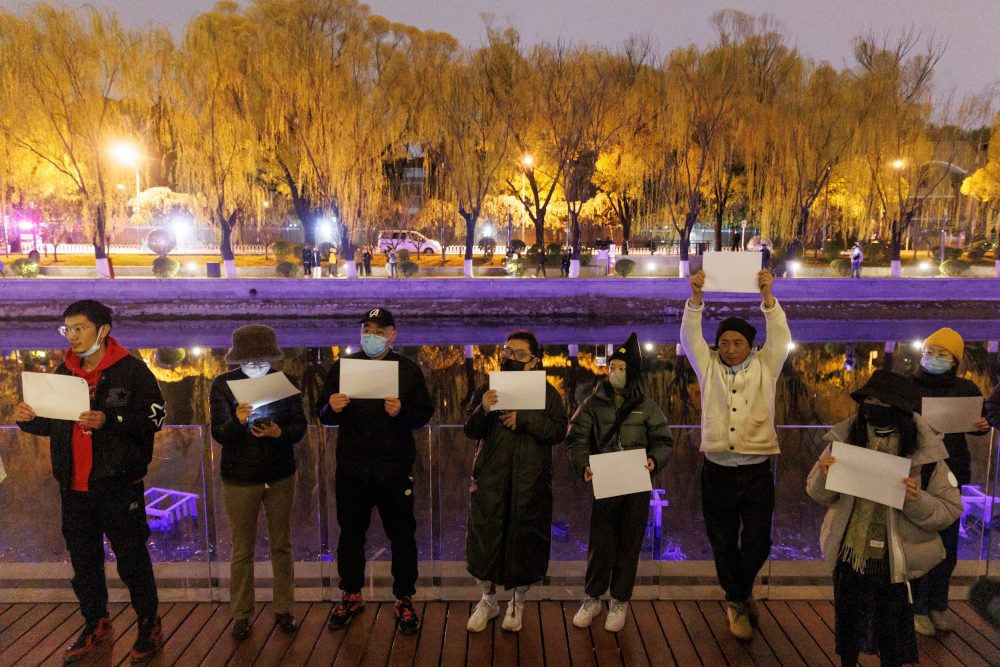 VIGIL AND PROTEST. People gather for a vigil and hold white sheets of paper in protest over coronavirus disease (COVID-19) restrictions, during a commemoration of the victims of a fire in Urumqi, as outbreaks of COVID-19 continue, in Beijing, China, on November 27, 2022.

Facebook Twitter Copy URL
Copied
There is no sign of new protests on November 28 in Beijing or Shanghai. The Public Security Bureau did not immediately respond to a request for comments.

Shanghai authorities put up barriers on Monday around a city center area where hundreds of people protested over the weekend against heavy COVID-19 measures, one of several demonstrations that have flared across the country.

From the streets of Shanghai and Beijing to university campuses, protesters made a show of civil disobedience unprecedented since leader Xi Jinping assumed power a decade ago to oversee the quashing of dissent and establishment of an extensive high-tech social surveillance system.

“We hope to end the lockdown,” said 28-year-old Shi at a candlelight vigil in Beijing late on Sunday, November 27. “We want to live a normal life. We should all bravely express our feelings.”

There was no sign of new protests on Monday in Beijing or Shanghai. The Public Security Bureau did not immediately respond to a request for comments.

The backlash against COVID-19 restrictions is a setback for China’s efforts to eradicate the virus, which is infecting record numbers of people and raising concern about the economic toll of lockdowns on the world’s second-largest economy.

The protests roiled global markets on Monday, sending oil prices lower and the dollar higher, with Chinese stocks and the yuan falling sharply.

Three years after the virus emerged in the central city of Wuhan, China remains the only major country not treating COVID-19 as endemic, imposing arduous restrictions on the daily lives of hundreds of millions across the country.

China’s zero-COVID policy has kept its death toll low compared with many other countries and officials say it must be maintained to save lives, especially among the elderly given their low vaccination rates.

China has not approved any Western-made COVID shots and a Hong Kong study late last year found that its CoronaVac shot made by Sinovac did not produce adequate levels of antibodies to fight the Omicron variant.

Experts say China must ramp up its vaccinations before it can contemplate reopening and many analysts say that is unlikely before March or April.

Late on Sunday, in the commercial hub of Shanghai, where its 25 million people were stuck at home in April and May, protesters clashed with police, with security forces taking away a busload of people.

The BBC said police assaulted and detained one of its journalists covering the events before releasing him after several hours. A Reuters journalist was also detained for about 90 minutes on Sunday night, before being released.

The Shanghai government did not immediately respond to a request for comment.

On Monday, the Shanghai streets where protesters gathered were blocked off with blue metal barriers, in what looked like a bid to prevent crowds gathering. Police in high-visibility vests patrolled in pairs, while police cars and motorbikes cruised by.

Shops and cafes in the area were asked to close, a staff member at one told Reuters.

China this month sought to make its COVID-19 curbs more targeted and less onerous, prompting hopes it would soon begin moving towards a full reopening, but a resurgence in cases has put paid to that.

While China’s COVID policy has remained a key source of uncertainty for investors, developments are now also being watched for any signs of political instability, something many investors had not considered in authoritarian China, where Xi recently secured a third leadership term.

“However, they have the potential to be credit negative if they are sustained and produce a more forceful response by the authorities.”

Chinese state media did not mention the protests, instead urging citizens in editorials to stick to COVID rules.

The catalyst for the protests was an apartment fire last week in the western city of Urumqi that killed 10 people. Many speculated that COVID-19 curbs in the city, parts of which had been under lockdown for 100 days, had hindered rescue and escape, which city officials denied.

Crowds in Urumqi took to the street on Friday. Over the weekend, protesters in cities including Wuhan and Lanzhou overturned COVID-19 testing facilities, while students gathered on campuses across China.

Discussion of the protests, as well as pictures and footage, sparked a game of cat-and-mouse between social media posters and censors.

In Beijing, large crowds of peaceful but impassioned people gathered past midnight on Sunday on a city ring road.

Some held blank pieces of paper, which has become a symbol of protest. Some drivers honked their horns and gave the thumbs up. Early on Sunday in Shanghai, some protesters briefly chanted anti-Xi slogans, almost unheard of in a country where Xi has a level of power unseen since Mao Zedong’s era.

“Down with the Chinese Communist Party, down with Xi Jinping”, one large group chanted, according to witnesses and videos posted on social media.

But most of the frustration has been directed at zero-COVID.