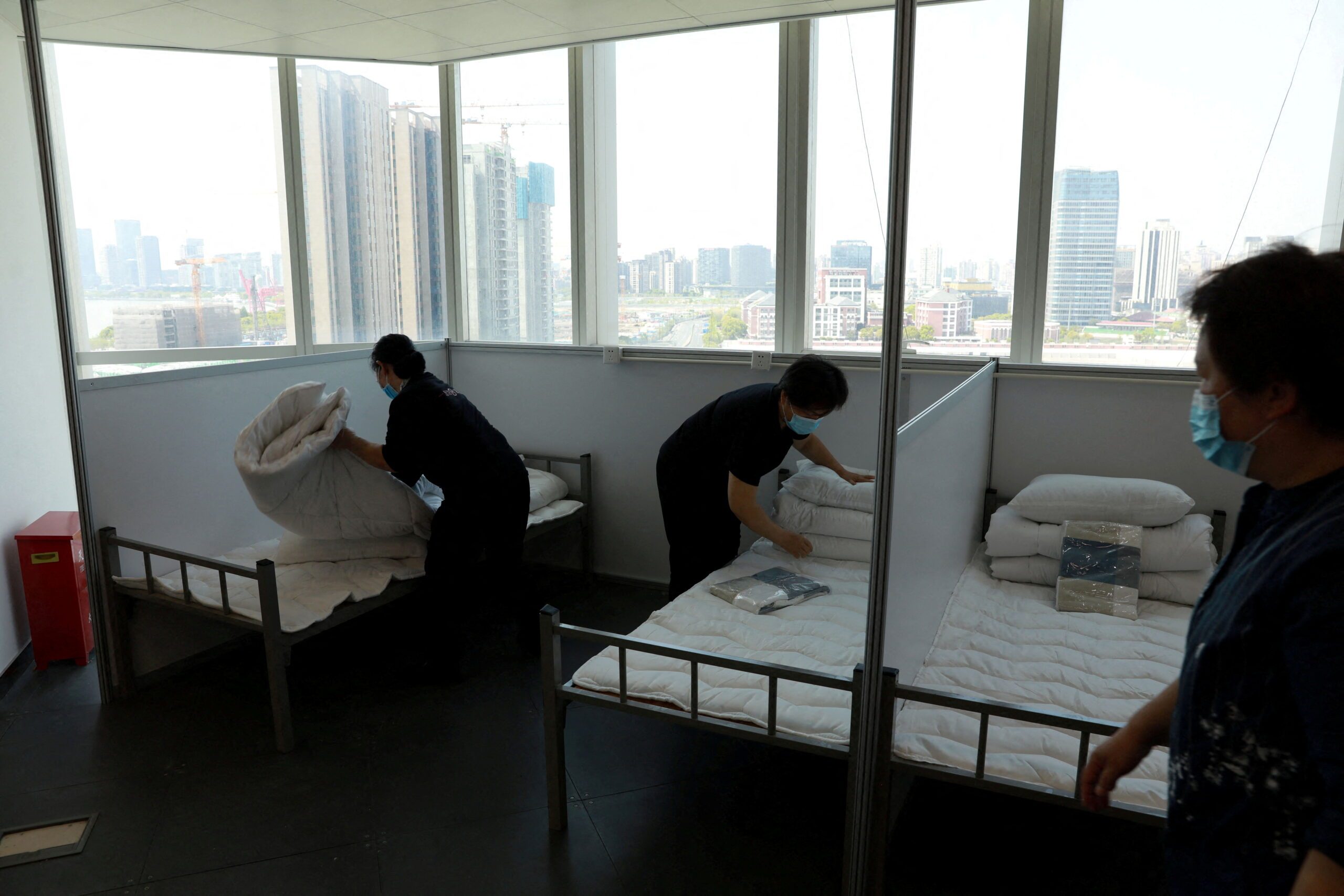 MAKESHIFT HOSPITAL. In this file photo, workers make beds at a 17-storey office building to convert it into a makeshift hospital for the coronavirus disease (COVID-19), in Shanghai, China April 12, 2022.

SHANGHAI, China – Shanghai is converting residential buildings into quarantine centers to house a mounting number of COVID-19 cases, but the move is sparking anger and protest from neighbors worried they are being put at increased risk of infection.

In an incident livestreamed on Thursday afternoon on Chinese messaging platform WeChat, about 30 people wearing hazmat suits with the word “police” on their back could be seen scuffling with other people outside a housing compound, taking away at least one person.

A woman could be heard weeping as she filmed the scene, which was watched by over 10,000 people before it was abruptly cut, with the WeChat livestream platform announcing it had contained “dangerous content.”

“It’s not that I don’t want to cooperate with the country, but how would you feel if you live in a building where the blocks are only 10 meters (30 feet) apart, everyone has tested negative, and these people are allowed in?” said the woman who was filming and did not disclose her real name.

The video could not be independently verified but the dispute was confirmed by the building’s management on Friday.

The Zhangjiang Group, which owns the compound, said authorities had converted five of its vacant buildings into isolation facilities and it had been advised a further nine buildings would be converted.

It said it had moved 39 rental tenants to rooms in other parts of the compound and had offered them compensation.

The Shanghai government did not respond immediately to a request for comment on its current quarantine policy.

A resident at the compound, which is close to the Zhangjiang Hi-Tech Park complex 600895.SS housing firms including GlaxoSmithKline and Hewlett-Packard, confirmed they were notified on Tuesday that residents were asked to move out.

Workers turned up on Thursday afternoon and police arrived shortly after, said the resident who witnessed the scene. She declined to be named as the situation was sensitive.

“This place is completely unsuitable to become a quarantine centre,” she said, expressing fears she could catch the virus by living so close to patients.

Under China’s zero-COVID policy, everyone who tests positive must quarantine at designated sites and the neighbors are asked to isolate in their homes for 14 days, which has stoked public fear about the consequences of catching the virus. Shanghai has become the epicenter of China’s largest outbreak since the virus was first identified in Wuhan in late 2019, recording more than 300,000 COVID infections since March.

The city has begun converting schools, recently finished apartment blocks and exhibition halls into quarantine centres, and announced last week it had set up more than 160,000 beds across more than 100 make-shift hospitals. According to regulations, authorities in China are allowed to take over buildings and other properties in order to deal with emergency situations.

Cities across the country have also occupied facilities to house quarantined residents, triggering complaints from people forced to move out, according to reports on social media. – Rappler.com