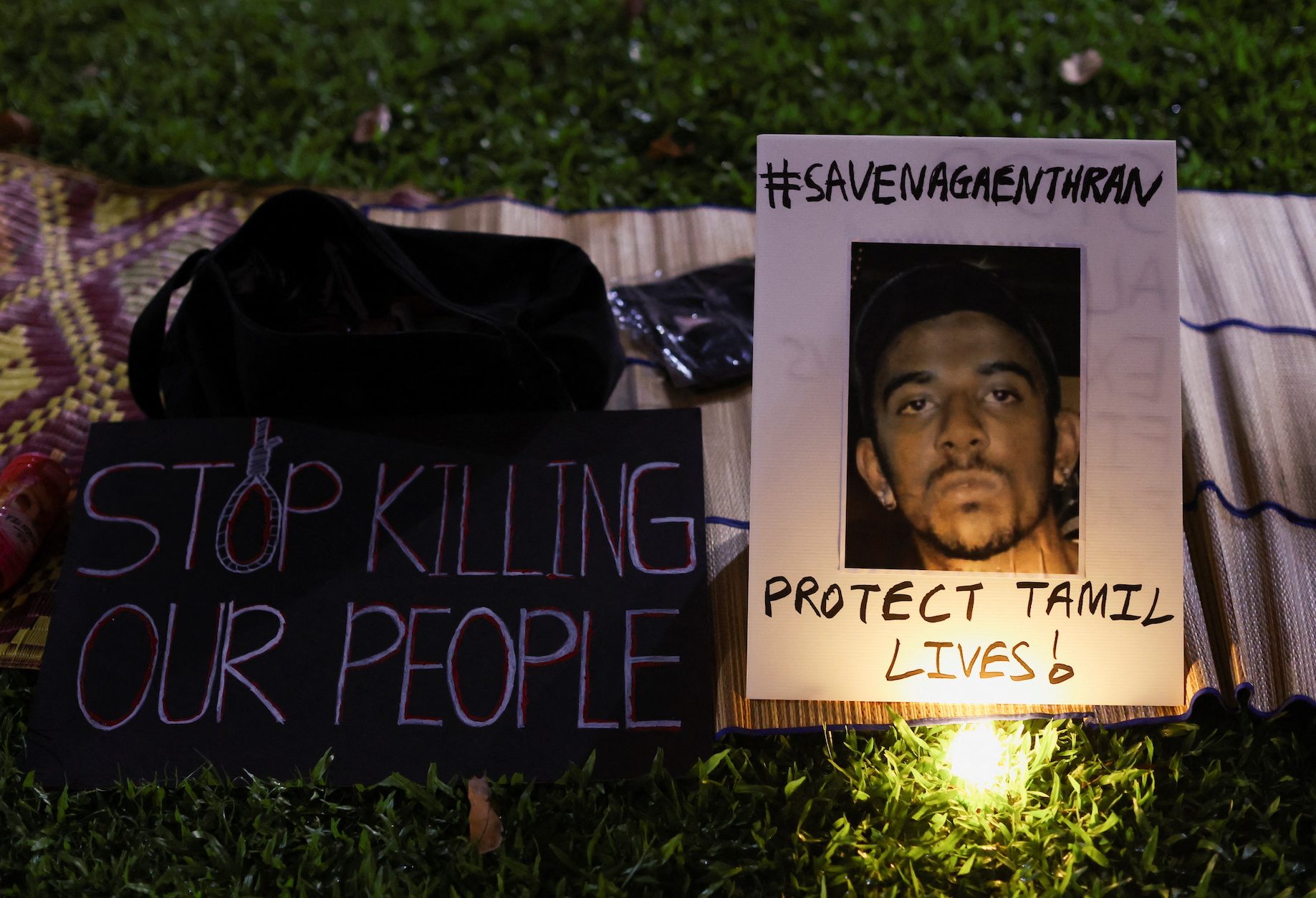 A poster of Nagaenthran Dharmalingam is pictured at a vigil ahead of the planned executions of Malaysians Dharmalingam and Datchinamurthy Kataiah at Hong Lim Park in Singapore April 25, 2022. REUTERS/Edgar Su

Facebook Twitter Copy URL
Copied
Nagaenthran Dharmalingam, 34, has been on death row for more than a decade for trafficking 43 grams of heroin into Singapore. He lost his final appeal against the execution last month.

SINGAPORE – About 300 people held a candlelight vigil at a Singapore park on Monday, April 25, to protest against the planned hanging of a Malaysian convicted of drug smuggling whom activists say should be spared because he has an intellectual disability.

Nagaenthran Dharmalingam, 34, has been on death row for more than a decade for trafficking 43 grams (1.5 oz) of heroin into Singapore. He lost his final appeal against the execution last month.

The Supreme Court will on Tuesday hear another motion filed by Dharmalingam and his mother. The details of the motion were unclear.

“I don’t want to give up hope until the day,” his cousin, Thenmoli Sunniah said, referring to the date the family say the execution is scheduled for, April 27. Dharmalingam’s family stood at the perimeter of the park as foreigners are not allowed to enter under Singaporean laws on protests.

His lawyers and activists have said Nagaenthran’s IQ was found to be at 69, a level recognized as an intellectual
disability.

The vigil was accompanied by speeches, prayers and musical performances. Participants wore T-shirts with slogans calling for the death penalty to be abolished.

The vigil was also for another Malaysian on death row in Singapore, Datchinamurthy Kataiah, who was convicted of
trafficking 45 g of diamorphine.

“It’s unnecessary and outdated and doesn’t make us more safe, targets people in poverty and the minority,” said a
26-year-old participant in the vigil, Jess Koh, referring to the death penalty.

The Singapore government says the death penalty is a deterrent against drug trafficking and most of its citizens
support capital punishment. – Rappler.com