SUBMERGED BRIDGE. A bridge is submerged by torrential rain at Han river in Seoul, South Korea on August 10, 2022.

Facebook Twitter Copy URL
Copied
More rain is forecast for August 10, but less than the heavy downpours earlier experienced, which submerged some streets and buildings

SEOUL, South Korea – Torrential rains that have slammed South Korea’s capital, Seoul, diminished on Wednesday, August 10, after killing at least nine people and damaging about 2,800 homes and other buildings. 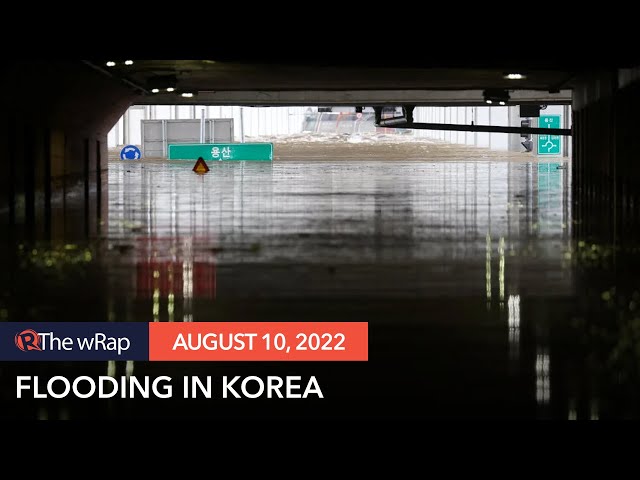 More rain was forecast for Wednesday, but less than the heavy downpours on Monday and Tuesday that submerged some streets and buildings, trapping people in flooded apartments and stranding cars.

At least five people had been killed in Seoul as of early Wednesday, as well as three in the neighboring Gyeonggi Province and one in Gangwon Province, according to the Central Disaster and Safety Countermeasures Headquarters.

At least 17 people have been injured, and seven are missing.

Flooding in some buildings around the glitzy Gangnam district continued on Tuesday, while subway stations and several roads there had been blocked.

Data showed at least 2,800 public and private facilities had been damaged across South Korea, and more than 1,100 households had been displaced. Most highways and subway lines had been cleared by Wednesday.

The accumulated rainfall in Seoul since midnight Monday stood at 525 millimeters as of 7 am Wednesday, according to the Korea Meteorological Administration (KMA), with more forecast. In neighboring Yangpyeong County, total rainfall hit 532.5 mm.

The KMA expects rain to continue in most parts of the country, with especially heavier rain in Chungcheong Province. The agency predicted that rainfall would gradually subside in many parts of the greater Seoul area and Gangwon Province.

South Korean President Yoon Suk-yeol will preside over a meeting at 10 am on Wednesday to discuss damage and countermeasures against flooding. Separately, the government and the ruling People Power Party are expected to hold an emergency meeting to discuss fiscal support for damage recovery. – Rappler.com