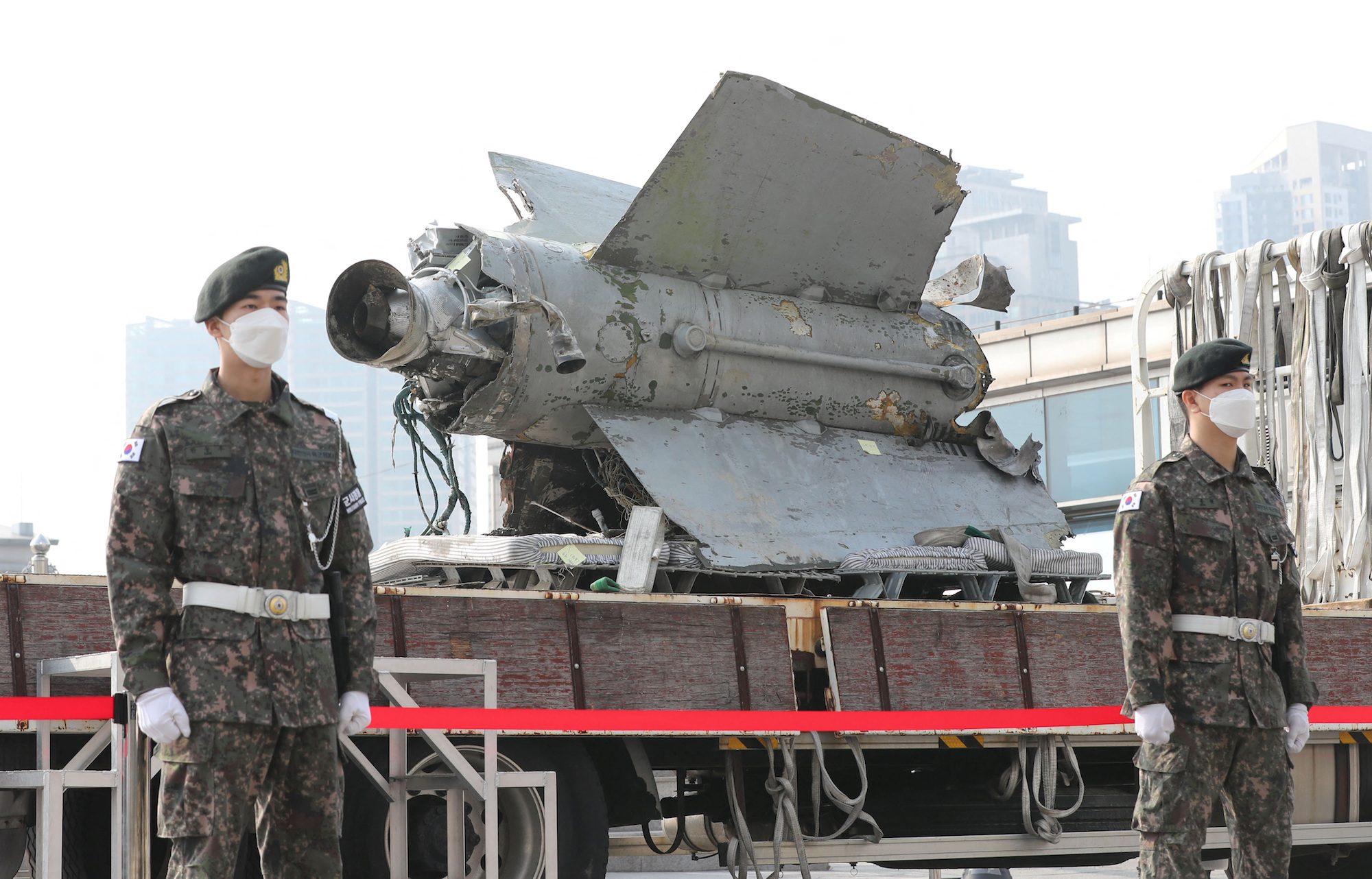 SALVAGES. Debris of a North Korean missile salvaged from South Korean waters that was identified as parts of a Soviet-era SA-5 surface-to-air missile is seen at the Defense Ministry in Seoul, South Korea, November 9, 2022.

Facebook Twitter Copy URL
Copied
(1st UPDATE) Japan's Coast Guard also tracks the missile, and says it appeared to have fallen into the sea minutes after the launch was first reported

SEOUL, South Korea – North Korea fired at least one ballistic missile into the sea on Wednesday, November 9, as South Korea said it had identified debris from an earlier launch as part of a Soviet-era SA-5 surface-to-air missile.

Seoul’s Joint Chiefs of Staff (JCS) said it had detected the launch of an unspecified ballistic missile from North Korea, but no further details, such as the projectile’s flight range, were immediately available.

Japan’s Coast Guard also tracked the missile, and said it appeared to have fallen into the sea minutes after the launch was first reported.

The launch came after South Korea concluded an analysis of what it had initially said was part of a North Korean short-range ballistic missile (SRBM) that landed near South Korean waters last week.

The analysis, however, showed the piece, about 3 meters (3.3 yards) long and 2 meters wide, was part of an SA-5 anti-aircraft missile, the defense ministry said, citing its appearance and features.

The ministry strongly condemned the missile launch at the time, calling it a breach of a 2018 inter-Korean military pact banning any activities stoking border tensions.

“This SA-5 missile launch was a clearly deliberate, intentional provocation,” it said in a statement. “The SA-5 also has characteristics of a surface-to-surface missile, and Russia has used similar missiles in Ukraine for surface-to-surface attacks.”

A South Korean Navy ship used an underwater probe to recover the missile, which came as the North test-fired multiple missiles last week, including a possible failed intercontinental ballistic missile (ICBM), protesting against joint air drills by South Korea and the United States.

It was the first time a North Korean ballistic missile had landed near South Korean waters.

North Korea’s military said the launches were simulated strikes on South Korea and the United States, criticizing their exercises as an “dangerous, aggressive war drill.”

The SA-5 is an air defesce missile originally designed by the Soviet Union, where it was designated the S-200, to shoot down strategic bombers and other high-altitude targets.

The missile was exported around the world, and is still in service in at least a dozen countries, according to the Center for Strategic and International Studies’ Missile Defense Project.

North Korea took delivery of SA-5 systems in the mid-1980s, according to “The Armed Forces of North Korea: On the Path of Songun”, a 2020 survey by Dutch researchers.

“Two sites equipped with these very long-ranged systems cover the entirety of North Korean airspace as well as a sizeable chunk of that of the South,” the researchers wrote.

“However, having been designed to counter strategic aircraft, their use against modern fast jets such as the F-15 and F-16 is questionable to say the least.” – Rappler.com