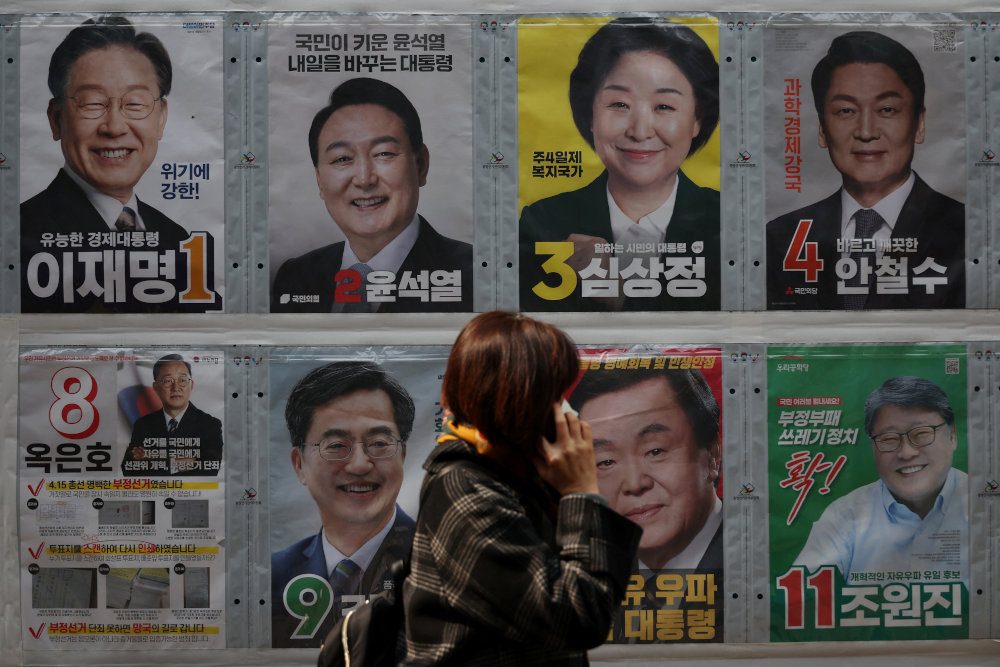 Facebook Twitter Copy URL
Copied
(1st UPDATE) The attack on Song Young-gil is yet another twist in a race overshadowed by scandals, smear tactics and gaffes

SEOUL, South Korea – The chief of South Korea’s ruling party was admitted to a hospital on Monday, March 7, after being hit on the head by a stranger while campaigning for this week’s presidential election, in which early voting has been marred by some lapses.

A tight race between Lee Jae-myung of the ruling Democratic Party and Yoon Suk-yeol of the conservative main opposition People Power Party was reflected in a record turnout of nearly 37% in two days of absentee voting that ended on Saturday.

Monday’s attack on Song Young-gil, leader of the Democrats and Lee’s election campaign, was yet another twist in a race overshadowed by scandals, smear tactics and gaffes.

Song was struck on the head with a small hammer-like tool, wielded by a man wearing a traditional robe who approached him from behind, a video uploaded to YouTube by a Democrat campaigner showed.

Reuters could not independently verify the images, but party officials said Song was in stable condition and the man, subdued by officials, was handed to police.

“Violence harms democracy, it can never be accepted,” the party’s presidential candidate, Lee, told another rally in the southeastern port city of Busan, and wished Song a rapid recovery.

The incident came as poll officials scrambled to revamp plans after early voting procedures were blighted by long waits outside poll stations for coronavirus sufferers, while other voters received ballots already marked.

As daily COVID-19 infections hover near unprecedented levels above 200,000 and more than 1 million receive treatment at home, parliament passed a legislative amendment to ease in-person voting by such patients.

But chaos erupted at many polling places during Saturday’s special early voting for infected voters, spurring repeated apologies from the National Election Commission (NEC) for failing to ensure a stable and orderly process.

“All the problems resulted from our failure at thorough preparations, and we are fully responsible for falling short,” it said in a statement.

There was no sign of foul play, it added, but officials held an emergency meeting on Monday to tighten procedures ahead of the wider vote.

President Moon Jae-in expressed regret on Sunday, asking the NEC to fully explain the errors and guarantee all people’s right to vote, his spokeswoman said.

The chaos represented a blow for South Korea, tarnishing its 35-year democratic history of tight and relatively transparent management of elections, and a mostly successful fight on COVID-19.

Instead of letting voters directly cast ballots, some election workers collected and carried them in a shopping bag or wooden bucket to place in ballot boxes, the NEC said.

Some voters received ballot-papers that had already been used, while others had to wait in long queues in the cold, with at least one reported to have fainted.

Opposition candidate Yoon’s campaign criticised the NEC, saying, “An elementary classroom election could not be sloppier,” and urged its chairwoman, Noh Jeong-hee, to step down.

About 44 million South Koreans are eligible to vote for a successor to Moon, who is legally barred from re-election at a time of growing frustration over skyrocketing home prices, polarised politics and graft scandals. – Rappler.com