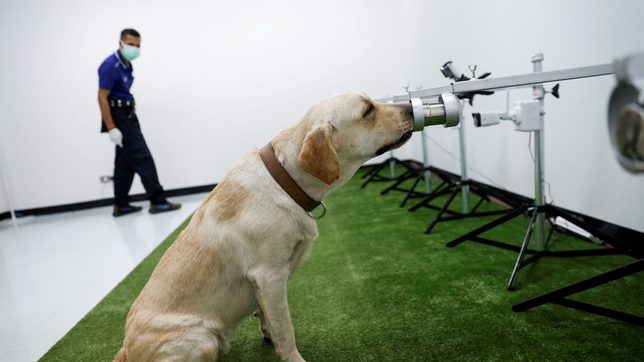 A dog that has been trained to sniff out the coronavirus disease (COVID-19), screens a sweat sample at Chulalongkorn University, in Bangkok, Thailand May 21, 2021.

Facebook Twitter Copy URL
Copied
Three of six trained Labradors debut at Bangkok's Chulalongkorn University after trials that the project leader says had shown a success rate of about 95%, with about 2,000 samples sniffed this month

Thailand on Friday, May 21, deployed dogs trained to detect coronavirus infections by sniffing samples of human sweat, as the country deals with a spike in infections, including many without symptoms of the virus.

Three of six trained Labradors made their debut at Bangkok’s Chulalongkorn University after trials that the project leader said had shown a success rate of about 95%, with about 2,000 samples sniffed this month.

“The canines are very fast at screening,” said co-researcher Thitiwat Sirprasart. “At this pace, we are able to isolate those whom we suspect are infected from those who are virus-free.”

The dogs are not required to smell the humans directly. Sweat samples are collected from humans and stored in small metal containers for the dogs to inspect one-by-one.

When a suspected infection is found, the dog halts and directs its nose at the sample.

The project’s directors hope the dogs will be used at airports or boat piers and say they are more effective than temperature checks.

Thailand is fighting its most severe outbreak yet, with cases quadrupling to 123,066 and deaths increasing seven-fold since the start of April to 735. – Rappler.com