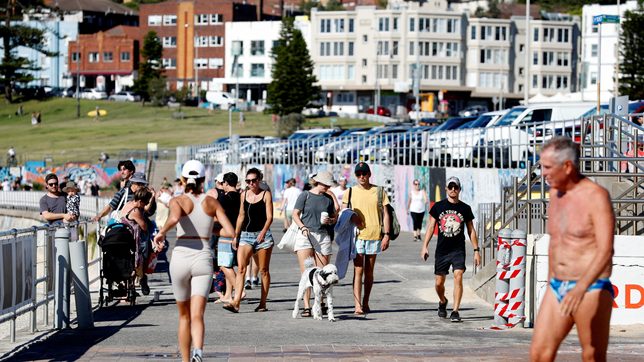 SYDNEY. People spend time at Bondi Beach, as the Omicron variant of the coronavirus spurs a surge in coronavirus disease (COVID-19) cases in Sydney, Australia, on December 30, 2021.

Facebook Twitter Copy URL
Copied
Many countries have scaled back New Year celebrations due to Omicron, but celebrations will proceed in Sydney as normal after last year's plans were toned down due to COVID-19

SYDNEY, Australia – Sydney, the Australian city worst-affected by the Omicron wave, will press ahead with New Year’s Eve celebrations on Friday, December 31, with authorities encouraging revelers to come out and enjoy the festivities despite a record number of COVID-19 cases.

Thousands are expected to flock to prime harbourside spots to watch Sydney’s famous fireworks, the traditional 12-minute pyrotechnic display to ring in the new year, with queues forming at many vantage points since early morning.

Prime Minister Scott Morrison wished people to “enjoy the evening,” while NSW Premier Dominic Perrottet urged everyone to “head out and enjoy New Year’s” as daily infections in the state nearly doubled to a record 21,151 on Friday.

Many countries have scaled back New Year celebrations in an effort to contain rampant contagion from the Omicron coronavirus variant, but celebrations will proceed in Sydney as normal after last year’s plans were toned down due to COVID-19.

Sydney, the capital of New South Wales (NSW) state, is one of the world’s first major cities to welcome each New Year, with a public countdown and fireworks display over its iconic Opera House.

All Australian states, except for Western Australia, have begun to live with the virus after higher vaccination levels and the ease in restrictions has pushed cases to record highs.

Despite the record surge, Perrottet on Friday reiterated NSW is “in a very strong position” due to higher inoculations and that hospitals were coping with the Omicron wave.

“While case numbers are substantially increasing, compared to where we were with the Delta variant, our position remains incredibly strong,” Perrottet told reporters.

Of more than 135,000 active cases in Australia, only 127 people are in intensive care, according to official data.

Australia on Friday reported more than 32,400 cases, a new pandemic high, far exceeding the previous record of 21,329 a day earlier as total infections neared 400,000. A total of 2,239 deaths have been registered since the pandemic began. – Rappler.com