Taiwan calls for fair access to vaccines amid COVID-19 spike 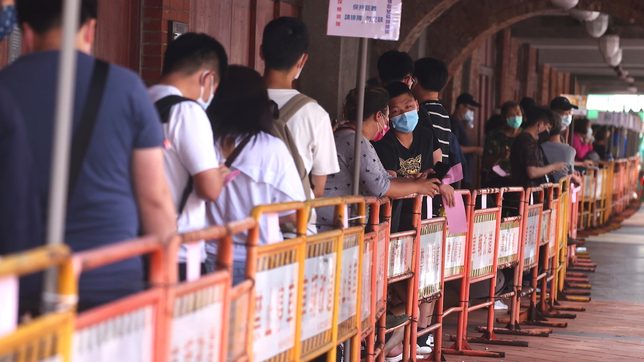 Taiwan’s government has called for fair access to COVID-19 vaccines during a meeting with senior Western diplomats, as it faces a dwindling supply of shots during a spike in domestic infections.

Taiwan has reported almost 1,000 new infections during the past week or so, leading to new curbs in the capital, Taipei, and shocking a population that had become accustomed to life carrying on almost normally.

But its stock of vaccines is rapidly falling. It has only received a little more than 300,000 to date, all from AstraZeneca Plc. At least two-thirds of those have been distributed. Taiwan’s Centers for Disease Control said in a statement on Wednesday, May 19, after a virtual workshop on vaccines on Tuesday with the top US, British, Japanese, and Australian diplomats in Taipei, that nowhere was immune from the pandemic’s threat unless everyone controls it.

“Fair access to effective vaccines is the ultimate means to curb the global COVID-19 pandemic. We look forward to more effective and sufficient vaccine development and marketing, and call on all countries to work together to end the COVID-19 pandemic,” it said.

Taiwan is mobilizing its diplomats to try to speed up access to more vaccines, and is in talks with the United States for a share of the COVID-19 shots President Joe Biden plans to send abroad.

Brent Christensen, the de facto US ambassador to Taiwan, said at the same event that “talking about COVID-19 vaccines can be a sensitive subject,” according to a copy of his remarks published by his office.

“We recognize that each country and region is at different stages in their COVID-19 vaccination programs,” the remarks said. “Unfortunately, many still face difficulties gaining access to vaccines.”

Taiwan has ordered 20 million doses, mostly from AstraZeneca but also from Moderna Inc, though global shortages have curtailed supplies.

The government says more vaccines are on the way, and hopes domestically developed shots can start being rolled out before the end of July. – Rappler.com