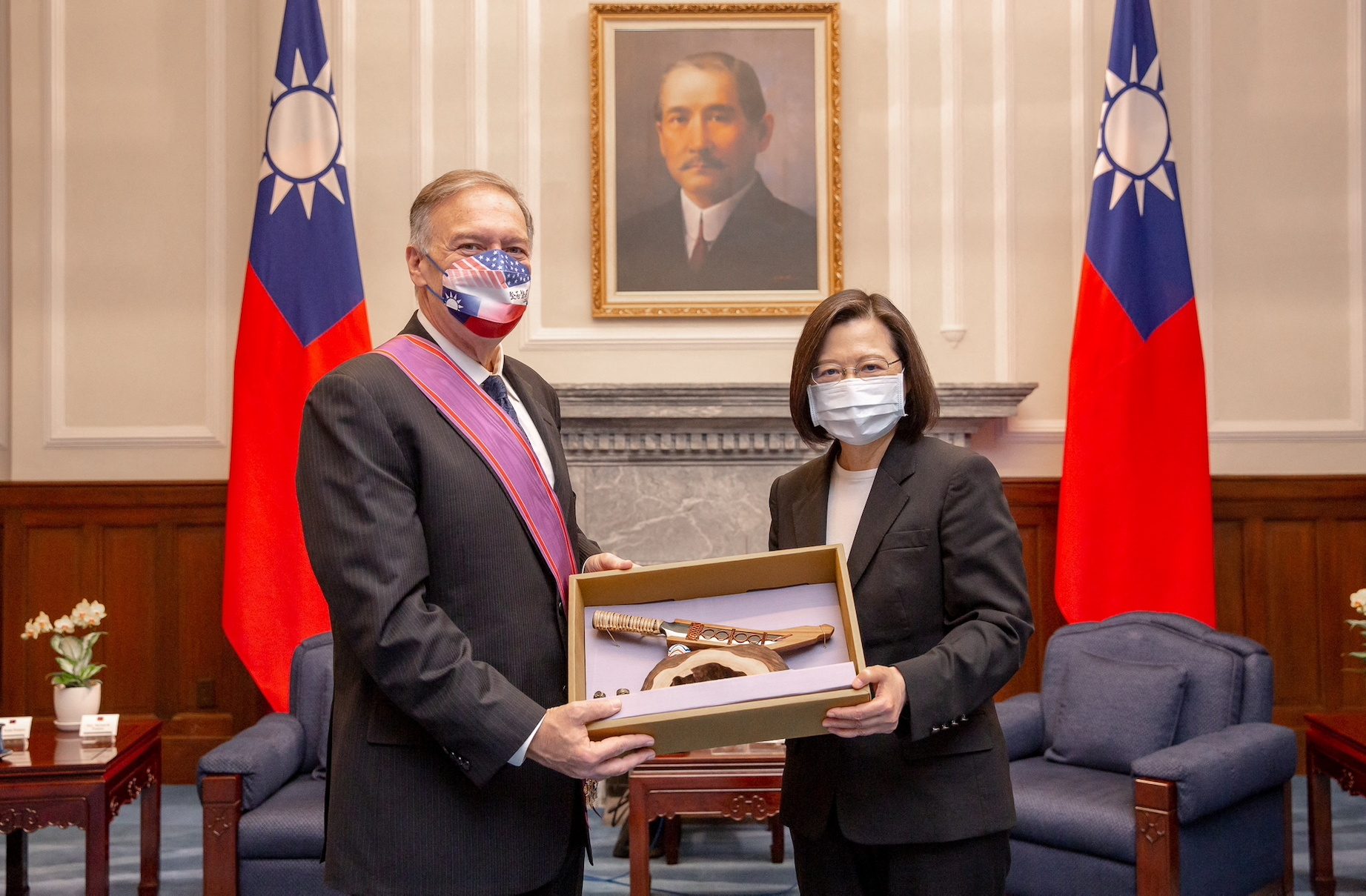 Taiwan's President Tsai Ing-wen poses for pictures with Former U.S. Secretary of State Mike Pompeo after he was bestowed with an Order of Brilliant Star with Grand Cordon at the presidential building in Taipei, Taiwan, March 3, 2022. Taiwan Presidential Office/Handout via REUTERS ATTENTION EDITORS - THIS IMAGE WAS PROVIDED BY A THIRD PARTY. NO RESALES. NO ARCHIVES.

TAIPEI, Taiwan – Taiwan President Tsai Ing-wen bestowed a presidential honor on former US Secretary of State Mike Pompeo on Thursday, March 3, for his contribution to boosting relations with the island, as China’s government lambasted his record as “despicable”.

China placed sanctions on Pompeo when he left office at the end of the Trump presidency last year, angered by his repeated criticism, especially of its ruling Communist Party, and support for Chinese-claimed Taiwan.

Meeting Pompeo at the presidential office in Taipei, Tsai thanked him for his long-time support for Taiwan.

“A visit from such a good friend as Secretary Pompeo attests to the strong Taiwan-U.S. friendship,” she said.

Tsai bestowed on him the Order of the Brilliant Star with Grand Cordon, one of Taiwan’s top honors. Former US Secretary of Defense Donald Rumsfeld is a previous recipient.

Pompeo, wearing a mask with US and Taiwanese flags emblazoned upon it, said he was proud of his achievements while in office to try and normalize relations with Taiwan, including sending US officials to visit.

“It is not provocative to say that one demands freedom. Indeed to walk away from these things demonstrate the absence of resolve,” he said.

Asked about his trip, Chinese Foreign Ministry spokesperson Wang Wenbin said: “The relevant actions from Pompeo are despicable and inevitably a futile effort”.

China’s top newspaper, the party’s official People’s Daily, weighed in with a commentary earlier on Thursday, calling Pompeo an “extremely notorious” anti-China politician who “took pride in lying and deceit” while in office.

The Donald Trump administration gave strong backing to Taiwan, despite the lack of formal diplomatic ties, including high-profile arms sales and visits by top US officials.

China has stepped up its military and diplomatic pressure against Taiwan over the past two years, seeking to force the island to accept its sovereignty.

Taiwan’s democratically elected government says it wants peace but will defend itself if attacked, and that only the island’s people have the right to decide their future. – Rappler.com