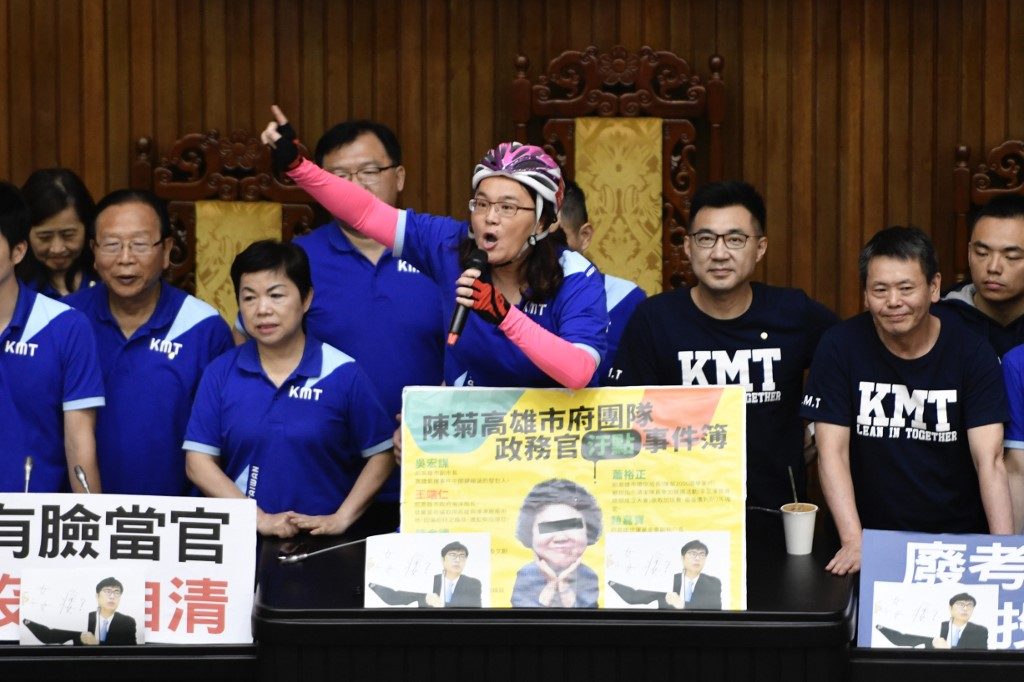 Taiwanese lawmakers scuffled in parliament on Tuesday, July 14, over a nomination for the head of a top government watchdog, the second time physical confrontations have erupted over the issue in as many weeks.

A KMT lawmaker was sent to hospital after his arm was cut when glass panels were shattered during the melee while several other lawmakers from both sides suffered minor injuries.

Taiwan’s parliament was once notorious for mass brawls among lawmakers and has been the location of frequent protests.

Scuffles broke out over reform policies and pension cuts when President Tsai Ing-wen first took office four years ago, but such confrontations had since become rare.

Chen, 70, has been nominated to be president of the Control Yuan, an investigatory agency that monitors the other branches of government.

The KMT is opposed to her appointment, which requires approval from the DPP-dominated parliament.

“Out of 27 nominees for Control Yuan members, 24 have close ties with the DPP,” the KMT said in a statement Tuesday.

“We refuse the list of corrupt nominees… we demand withdrawal of the list,” KMT chairman Johnny Chiang told supporters gathered outside parliament.

Chen is a long-time human rights advocate and was jailed for six years when Taiwan was a dictatorship under the KMT.

She has said she will quit the DPP after her nomination is approved to maintain the impartiality of the position.

“It’s very regrettable that I don’t have the opportunity to brief everyone in parliament today,” Chen said in a message posted on her Facebook page after the chaos.

“I have 100% confidence in my ideals and my innocence but the opposition party unilaterally and endlessly smears my name with accusations while using irrational methods to prevent me from getting on the podium.” – Rappler.com