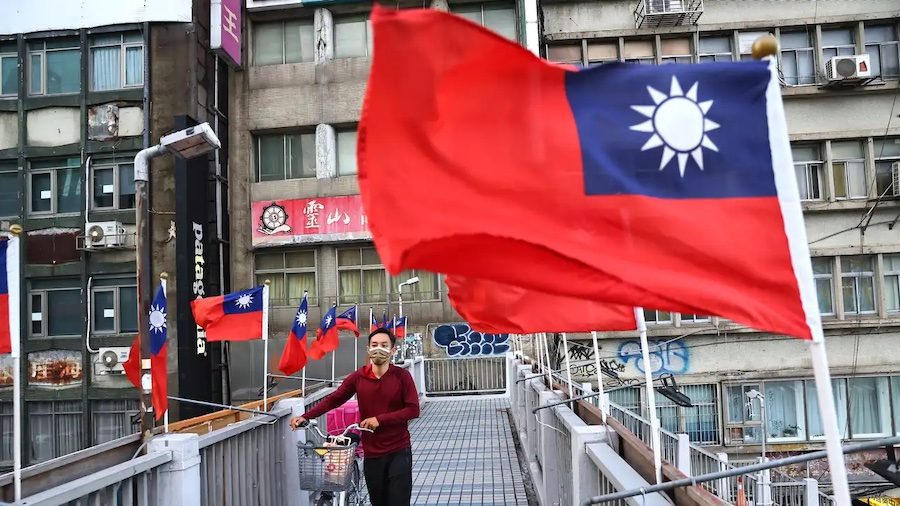 A man walks on an overpass decorated with Taiwan flags to celebrate the upcoming National Day in Taipei, Taiwan,October 7, 2021.

TAOYUAN, Taiwan – The head of Taiwan’s main opposition party the Kuomintang (KMT) defended its “brave” outreach to Beijing on Sunday, August 28, after a senior official visited China on a trip condemned by Taipei’s government and which upset even some party members.

China’s military drills near the democratically governed island this month in response to a visit to Taipei by US House Speaker Nancy Pelosi were widely condemned in Taiwan, including by the KMT.

But the KMT’s decision to send its deputy chairman Andrew Hsia to China on what the party said was a pre-arranged visit to the Taiwanese business community there shortly after the exercises began caused a storm of controversy.

Late Saturday after he returned, Taiwan’s China-policy making Mainland Affairs Council said Hsia was wrong to go and that opposition parties should recognize that China is “the instigator of the destruction of peace in the Taiwan Strait.”

Speaking at the party’s annual conference in Taoyuan, outside of Taipei, its chairman Eric Chu said that Hsia and others are “very brave and determined,” and it was important to keep lines of communication open to prevent conflict.

“We know that there will be different opinions and a backlash, but the KMT must insist on doing the right thing,” he said. “What’s more, if the two sides are in serious antagonism, no one can escape the risk of war.”

New Taipei City Mayor Hou You-yi, a senior KMT member who had called the merits of visiting China at this moment “debatable,” declined to answer reporters’ questions about Hsia at the congress.

Hsia, now in government-mandated quarantine, met senior officials while in China, including a deputy head of its Taiwan Affairs Office.

Taiwan is gearing up for mayoral and city councillor elections on November 26, a test for both parties ahead of the presidential and parliamentary vote in early 2024.

The local elections are traditionally more about domestic matters like pollution and social issues than about Taiwan’s international position or ties with China, but campaigning is now happening in the shadow of Beijing’s exercises.

The KMT was unable to shake accusations from the Democratic Progressive Party (DPP) that it would sell out Taiwan to China ahead of the 2020 presidential and parliamentary elections, leading to a DPP landslide.

The KMT ruled China until it fled along with the defeated Republic of China government to Taiwan in 1949 after losing a civil war to Mao Zedong’s communists, who established the People’s Republic of China. – Rappler.com