EMPTY STREETS. An empty street with a view of Taiwan's landmark building Taipei 101 following a surge of COVID-19 infections in Taipei, Taiwan on May 20, 2021.

Taiwan’s health minister promised on Sunday, May 22, to resolve a logjam with reporting positive COVID-19 tests after abruptly raising case numbers, a move that prompted criticisms from opposition politicians and jokes online about questionable statistics.

Taiwan is dealing with a spike in cases after months of keeping the pandemic well under control, with restrictions in place across the island to limit gatherings.

On Saturday and Sunday, Health Minister Chen Shih-chung announced a total of 570 new cases whose positive tests had not been included in previous reports due to reporting delays following the surge in cases.

Chen said they were working to resolve the “traffic jam” problem by simplifying the reporting system and adding more machines that can perform quicker and more accurate tests.

“I believe that we will quickly be able to resolve this systemic issue.”

He added this week would be a crucial one in terms of observing how well the virus was being brought under control, with the peak day for cases being seen last Monday.

Chen has said the “regression calibration” of case numbers was needed to more accurately reflect the state of infections.

But the move has gone down poorly with Taiwan’s opposition parties, who say Chen is inventing words and spreading fear.

“This information has terrified everyone, as the daily numbers being received were inaccurate.”

The small Taiwan People’s Party, led by Taipei Mayor Ko Wen-je, called on the government not to engage in “cognitive warfare,” riffing off accusations Taiwan has leveled at China about spreading propaganda and misinformation.

Ko said the rise in tests and infections was causing delays in reporting numbers to the central government for collation, but added the reporting system needed improving, rather than “creating new expressions.” 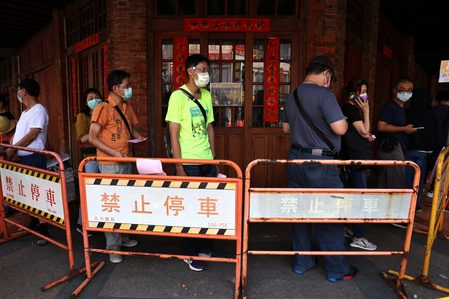 The term “regression calibration” has also caused some amusement online, and black humor.

In one joke, a woman asks her boyfriend how many girlfriends he has had before, to which he replies “just you.”

“After getting married, with regression calibration I’d had about 50.”

Taiwan has now reported 4,322 cases including 23 deaths since the pandemic began. – Rappler.com