A Taiwan Navy soldier monitors a Navy Force vessel of the Chinese People's Liberation Army (PLA), at an undisclosed location in this handout picture released on August 10, 2022.

TAIPEI, Taiwan – China’s threat of force is undiminished, Taiwan President Tsai Ing-wen said on Thursday, August 11, even though Beijing’s largest ever military drills around the island seemed to be scaling down.

Furious about a visit to Chinese-claimed Taiwan last week by US House of Representatives Speaker Nancy Pelosi, China launched ballistic missiles and deployed multiple aircraft and warships in recent days to simulate sea and air attacks.

China said on Wednesday it would keep up patrols but had “completed various tasks” around Taiwan, signaling a possible end to the war games even while keeping up pressure. 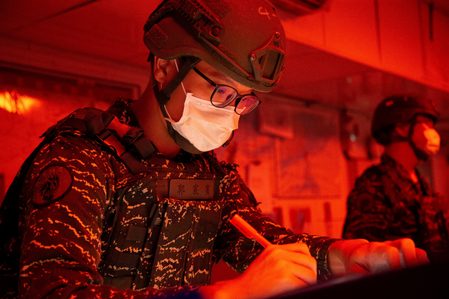 Taiwan has also been conducting relatively small-scale, annual exercises, scheduled before the flare-up and aimed at preparing to repel an invasion.

“At present, the threat of Chinese military force has not decreased,” Tsai told air force officers, according to a statement from her office.

Taiwan will not escalate conflict nor provoke disputes, her office quoted her as saying, adding: “We will firmly defend our sovereignty and national security, and adhere to the line of defense of democracy and freedom.”

A source briefed on the matter told Reuters that the number of warships close to the Taiwan Strait’s median line, an unofficial buffer, was “greatly reduced” from previous days.

But several Chinese navy ships were conducting missions off Taiwan’s east coast and near Japan’s Yonaguni island on Thursday, said the source familiar with security planning.

Yonaguni is the Japanese island closest to Taiwan, about 100 km (62 miles) away.

Taiwan’s Defense Ministry said in a statement it had on Thursday detected 21 Chinese military aircraft and six Chinese naval ships in and around the Taiwan Strait, of which 11 planes had crossed over the median line.

That was down from the 36 aircraft and 10 ships detected the previous day, when 17 aircraft crossed the median line.

Taiwan has lived under the threat of Chinese invasion since 1949 when the defeated Republic of China nationalist government fled to the island after Mao Zedong’s Communist Party won a civil war.

China says its relations with Taiwan are an internal matter and it reserves the right to bring the island under its control, by force if necessary.

Taiwan’s democratically-elected government says the People’s Republic of China has never governed the island so has no right to decide its future or claim it for themselves. 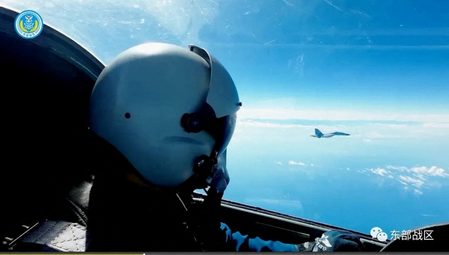 “In the face of China’s recent military provocations, the nation’s armed forces are right on the front lines, and its duties will only be more onerous and the pressure will be even greater,” added Tsai.

China’s military did not make any new comment on its military activity around Taiwan on Thursday.

However, the two sides continued their war of words, with Taiwan reiterating a rejection of China’s proposed “one country, two systems” model for bringing the island under Beijing’s control.

Only Taiwan’s people could decide its future, the spokesperson for Taiwan’s foreign ministry, Joanne Ou, told a news conference in Taipei.

China was using Pelosi’s visit to Taipei as an “excuse to create a new normality to intimidate Taiwan’s people”, Ou added.

“We are willing to create a wide space for peaceful reunification, but we will never leave any room for all forms of secessionist activities for Taiwan independence.” – Rappler.com