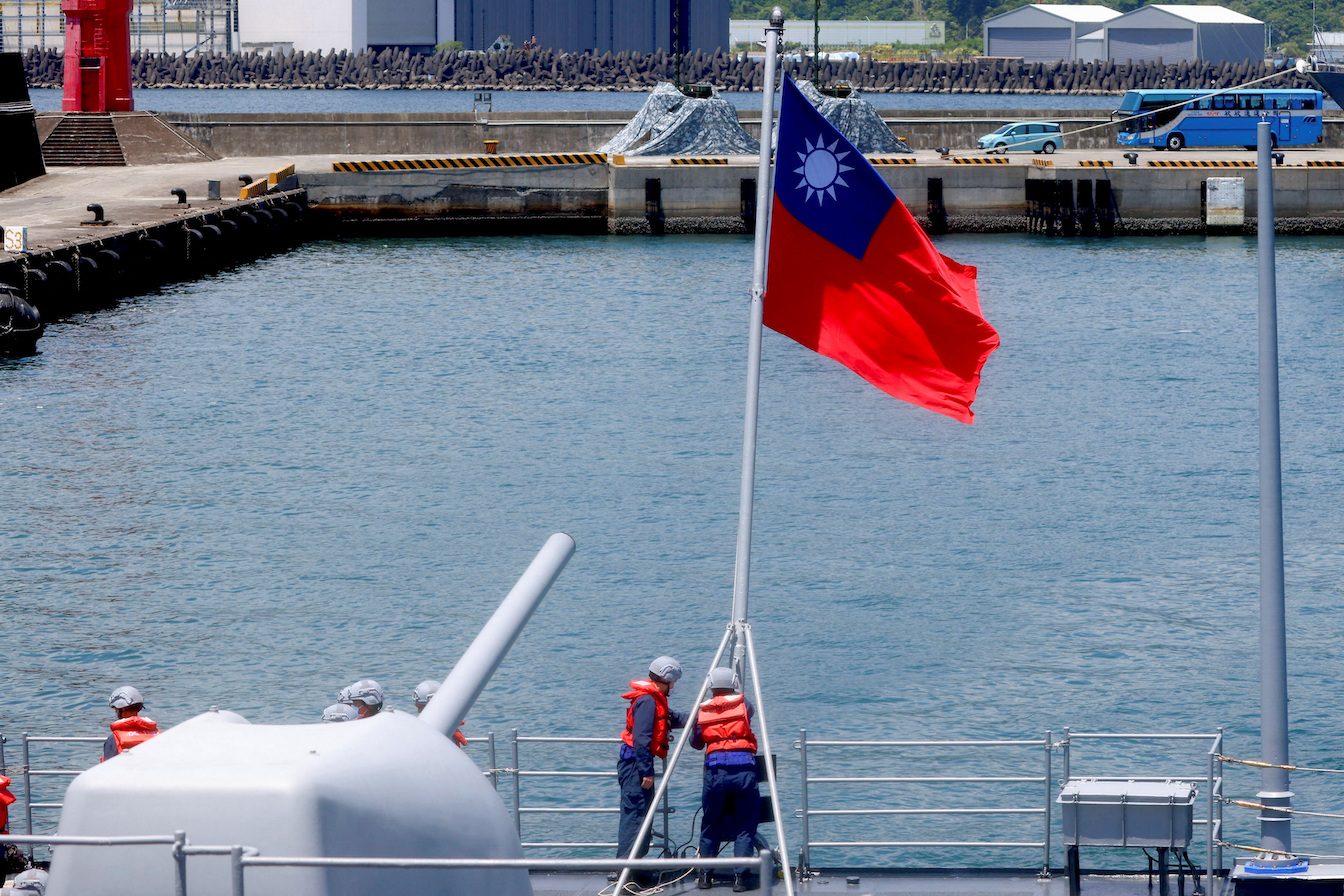 DEFENSE. In this file photo, members of the Taiwanese navy put up a Taiwanese flag as the naval vessel approaches the port in Yilan, Taiwan, July 26, 2022.

Facebook Twitter Copy URL
Copied
(1st UPDATE) Taiwan's official Central News Agency says it is the largest Chinese air force incursion to date, although there was no sense of alarm on the island

Of the aircraft, 43 also crossed the Taiwan Strait’s median line, an unofficial buffer between the two sides that lies within the defense zone, Taiwan’s Defense Ministry said in a report, as Beijing continues military activities close to the Chinese-claimed island.

Taiwan’s official Central News Agency said it was the largest Chinese air force incursion to date, although there was no sense of alarm on the island, which has witnessed a steady increase in Chinese pressure in recent years.

China, which claims Taiwan as its own territory, said it had conducted “strike drills” in the sea and airspace around Taiwan on Sunday in response to what it said was provocation from the democratically governed island and the United States.

A senior Taiwan official familiar with security planning in the region told Reuters that Taiwan assessed China had staged the military “provocation” to express anger at a new US defense authorization law that boosts military assistance for Taiwan.

The person, who declined to be identified as the information was not made public, said during the drills China’s air force dispatched warplanes from several locations across the country to carry out simulated attacks on Taiwanese and US warships.

China’s Taiwan Affairs Office did not immediately respond to a request for comment.

The statement gave no details, but the defense ministry has said it was considering extending compulsory military service beyond four months, as the war in Ukraine and rising tensions with Beijing renewed discussion about how to respond to Chinese military pressure.

“The more preparations we make, the less likely there will be rash attempts of aggression. The more united we are, the stronger and safer Taiwan would become,” Tsai told a military ceremony on Monday.

During the latest incursion, several Chinese planes, mostly fighter jets, briefly crossed the median line in the sensitive Taiwan Strait before returning to China, according to a map provided by Taiwan’s defense ministry. Seven Chinese navy ships were also detected near Taiwan, the ministry said.

China’s military also sent early warning, electronic-warfare and antisubmarine aircraft, as well as drones, into Taiwan’s southern air defense identification zone, or ADIZ, according to the report, which detailed Chinese activities near Taiwan over the 24 hours to 6 a.m. (2200 GMT on Sunday).

Taipei has complained of repeated missions by the Chinese air force over the last two years, often in southern areas of its ADIZ.

Taiwan sent unspecified combat aircraft to warn away the Chinese planes, while missile systems monitored their flight, the ministry said, using standard wording for its response.

China has stepped up its diplomatic, military and economic pressure in recent years on the self-governed island to accept Beijing’s rule. Taiwan’s government says it wants peace but will defend itself if attacked. – Rappler.com