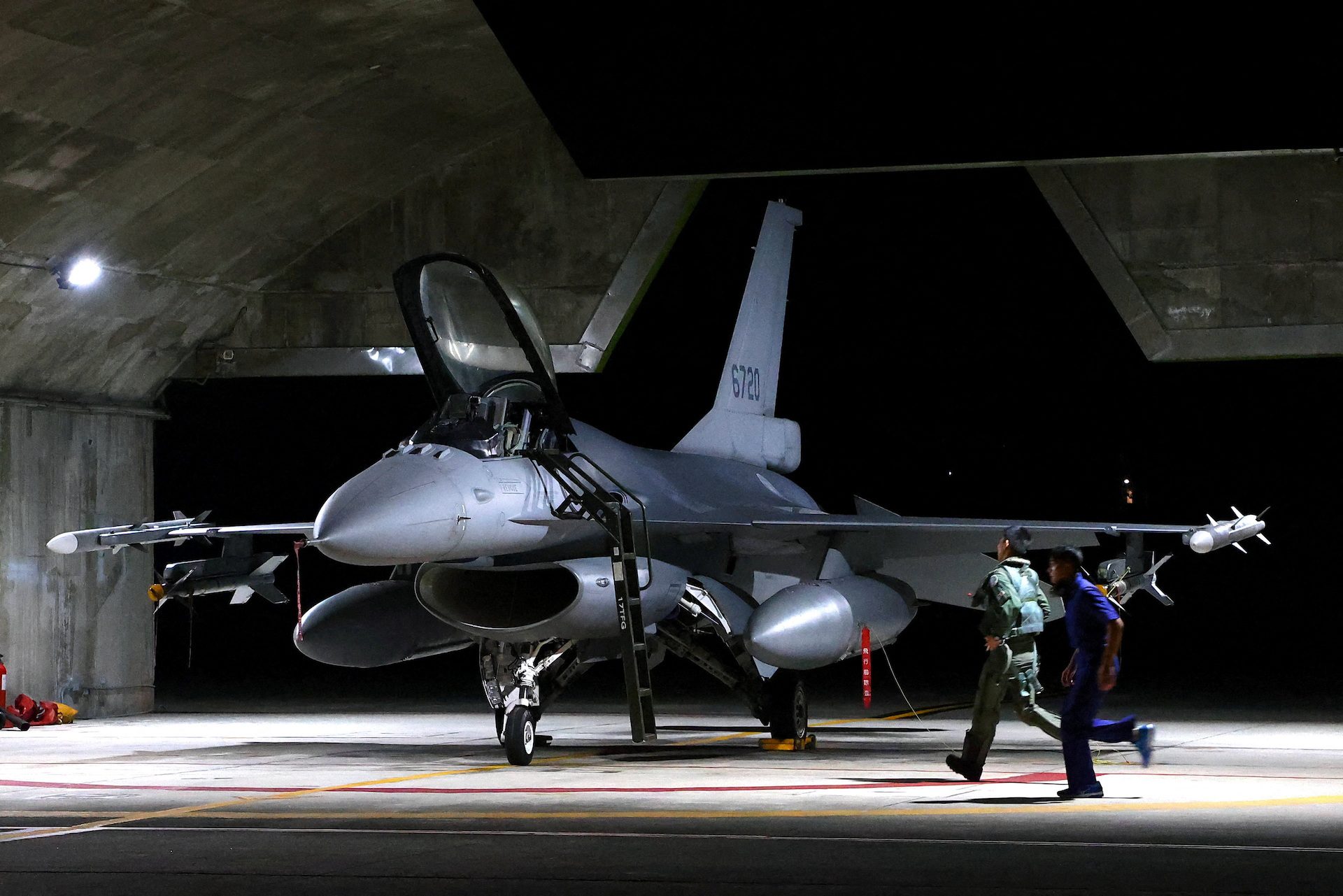 A pilot and Air Force soldier run towards a F-16V fighter jet for an evening take off as part of a combat readiness mission at the airbase in Hualien, Taiwan, August 17, 2022.

Facebook Twitter Copy URL
Copied
Taiwan President Tsai Ing-wen extols the 'spirit' of defending against China's more than a month of bombardment of the Taiwan-controlled islands of Kinmen and Matsu, just off the Chinese coast, which started in late August 1958

TAIPEI, Taiwan – Taiwan is determined to defend itself and invaders will incur a “heavy price”, President Tsai Ing-wen said on Tuesday, August 23, on the anniversary of a confrontation six decades ago in which Taiwanese forces beat back Chinese attackers.

Tensions between Taiwan and China have spiked over the past month following the visit to Taipei by US House Speaker Nancy Pelosi. China staged war games near Taiwan to express its anger at what it saw as stepped up US support for the island Beijing views as sovereign Chinese territory.

Meeting military officers, Tsai extolled the “spirit” of defending against China’s more than a month of bombardment of the Taiwan-controlled islands of Kinmen and Matsu, just off the Chinese coast, which started in late August 1958.

“This battle defended Taiwan for us, and it also declared to the world that no threat can shake the determination of the Taiwanese people to defend their country,” Tsai said, in comments released by her office.

“What we have to do is to let the enemy understand that Taiwan has the determination and preparation to defend the country, as well as the ability to defend itself,” she added.

“A heavy price will be paid for invading Taiwan or attempting to invade Taiwan, and it will be strongly condemned by the international community.”

Meeting earlier in the day with a delegation of former US officials now at Stanford University’s Hoover Institution, including Matt Pottinger, former US President Donald Trump’s deputy national security adviser, Tsai said that the 1958 battle paved the way for today’s Taiwan.

“Sixty-four years ago during the August 23 battle, our soldiers and civilians operated in solidarity and safeguarded Taiwan, so that we have the democratic Taiwan today,” she said, using the Taiwanese term for that campaign, which ended in stalemate with China failing to take the islands.

Taiwan fought then with support from the United States, which sent military equipment including advanced Sidewinder anti-aircraft missiles, giving Taiwan a technological edge.

Often called the Second Taiwan Strait Crisis, it was the last time Taiwanese forces joined battle with China on a large scale.

Among the US visitors was James O. Ellis, a retired US Navy admiral who said his delegation’s presence reaffirmed the American people’s commitment to deepening cooperation.

“Consistent with the Taiwan Relations Act, part of this cooperation involves strengthening Taiwan’s capabilities for self defense as well as the ability of the United States to deter and resist any resort to force across the Taiwan Strait,” Ellis told Tsai, referring to a US law that requires it to provide Taiwan with the means to defend itself.

The United States, which ditched formal diplomatic relations with Taipei in favor of Beijing in 1979, remains Taiwan’s most important source of arms.

“As Taiwan stands on the front line of authoritarian expansionism we continue to bolster our defense autonomy, and we will also continue to work with the United States on this front,” Tsai said.

China’s drills near Taiwan have posed a threat to the status quo in the strait and across the region, and democratic partners should work together to “defend against interference by authoritarian states”, she added.

Following that meeting, Tsai met two Japanese lawmakers, and other foreign parliamentarians are also expected to visit this year, including from Canada and Britain, defying Chinese pressure not to go.

Taiwan’s government says that as the People’s Republic of China has never governed the island it has no right to claim it or decide its future, which can only be set by Taiwan’s 23 million people. – Rappler.com