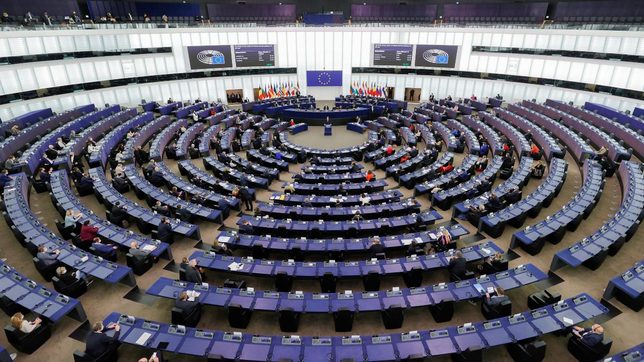 EUROPEAN PARLIAMENT. This file photo shows the European Parliament as Polish Prime Minister Mateusz Morawiecki delivers a speech during a debate on Poland's challenge to the supremacy of EU laws in Strasbourg, France, on October 19, 2021.

Facebook Twitter Copy URL
Copied
'We in Europe are also confronted with interference from authoritarian regimes and we came here to learn from you,' says Raphael Glucksmann, a French member of the European Parliament

Taiwan is “very high on the agenda” in the European Union, the grouping’s first official parliamentary delegation to the democratic island said on Wednesday, November 3, amid heightened tension between Taipei and Beijing.

Taiwan, which China claims as its own territory and has not ruled out taking by force, does not have formal diplomatic ties with any European nations except tiny Vatican City. But it is keen to deepen relations with members of the European Union.

“Our visit shows how Taiwan now is very high in the agenda in Brussels and in every member state,” Raphael Glucksmann, a French member of the European Parliament, told Taiwan Premier Su Tseng-chang at a meeting.

“We in Europe are also confronted with interference from authoritarian regimes and we came here to learn from you,” added Glucksmann, who is leading the delegation.

He described Taiwan as “a laboratory and a hub for the fight against foreign interference and the preservation of democracy.”

In a statement, Taiwan’s foreign ministry pointed to the “great significance” of the first official delegation from the European Parliament. Prior visits by foreign lawmakers have provoked China’s anger.

During the three-day visit, organized by a committee of the European Parliament on foreign interference in democratic processes, the ministry said the delegation would discuss threats such as disinformation and cyber attacks.

In a statement, the office of Taiwan’s President Tsai Ing-wen said the government would share its experiences in tackling challenges such as “foreign infiltration.”

The EU lawmakers’ visit comes after Taiwan Foreign Minister Joseph Wu made a rare trip to Europe last month that angered Beijing, which warned the host countries against undermining relations with China.

Last month, the European Parliament adopted a non-binding resolution to deepen ties with Taiwan, with steps such as looking into an investment agreement. – Rappler.com