Thai MPs to vote on reforms, day after 6 protesters shot 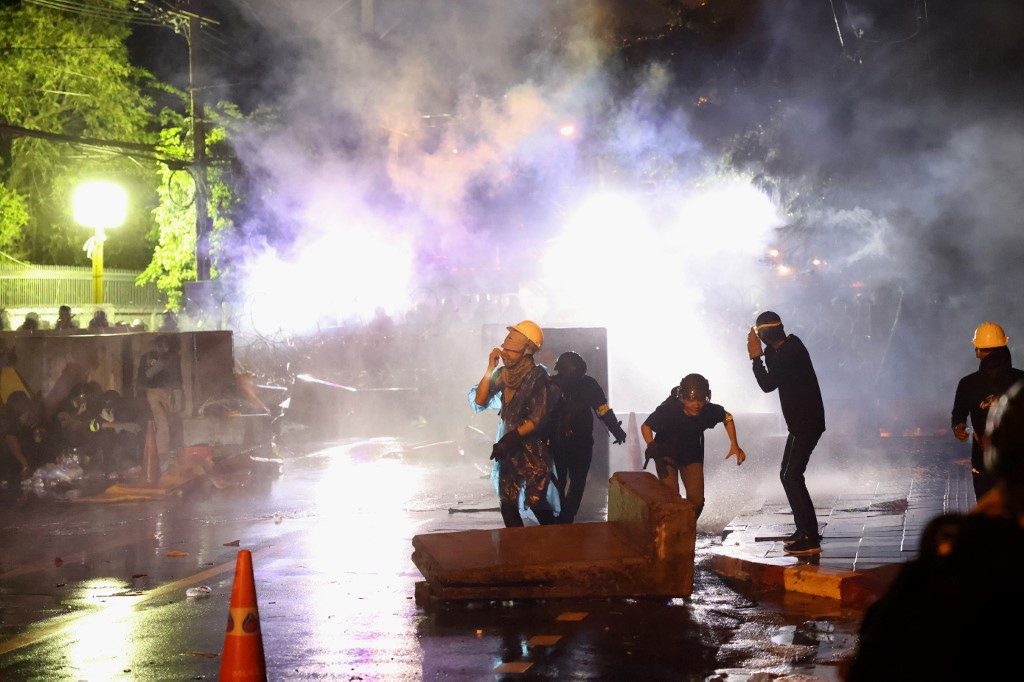 Pro-democracy protesters react as police fire tear gas during an anti-government rally near the Thai Parliament in Bangkok on November 17, 2020.

Facebook Twitter Copy URL
Copied
A day earlier, in the most violent clashes since the pro-democracy movement kicked off in July, police use tear gas and water cannon on demonstrators

Thai democracy protesters are set to return to the streets of Bangkok on Wednesday, November 18, a day after 6 of their number were shot with live rounds, as lawmakers prepared to vote on possible constitutional reforms.

A day earlier, in the most violent clashes since the pro-democracy movement kicked off in July, police used tear gas and water cannon on demonstrators.

Some in the crowd were shot, according to medical workers, though it was unclear who opened fire.

Bangkok has for months been rocked by youth-led rallies demanding a constitutional overhaul and the removal of Prime Minister Prayut Chan-O-Cha, who took power in a 2014 coup. Some in the movement have also called for reforms to the monarchy – a once-taboo subject.

On Tuesday, as lawmakers debated possible changes to the military-scripted constitution, protesters ploughed through police barricades towards parliament, prompting the use of tear gas and water cannon.

More than 50 people were injured, mostly by tear gas, according to the Erawan Emergency Medical Center, an ambulance and medical coordination service, which said 6 people were shot.

Four people were still in hospital.

The Thai Human Rights Lawyers Association slammed the police tactics, saying “it was not in accordance with international procedure to disperse demonstrations”.

At the two-day sitting, Thai MPs have been discussing various proposals for constitutional change, which mostly exclude any reform to the monarchy.

One proposal seeks to replace the military-appointed Senate with directly elected representatives.

It was Senate support that allowed Prayut to hold on to power after last year’s election.

Parliament is expected to vote Wednesday on which amendments are to be debated further.

The vote is expected to take several hours and may not be finished by the time protesters regroup at a major intersection in Bangkok’s shopping district of Ratchaprasong at 4 pm (0900 GMT).

“We will open a new era in our fighting,” prominent student leader Parit “Penguin” Chiwarak told the crowd overnight.