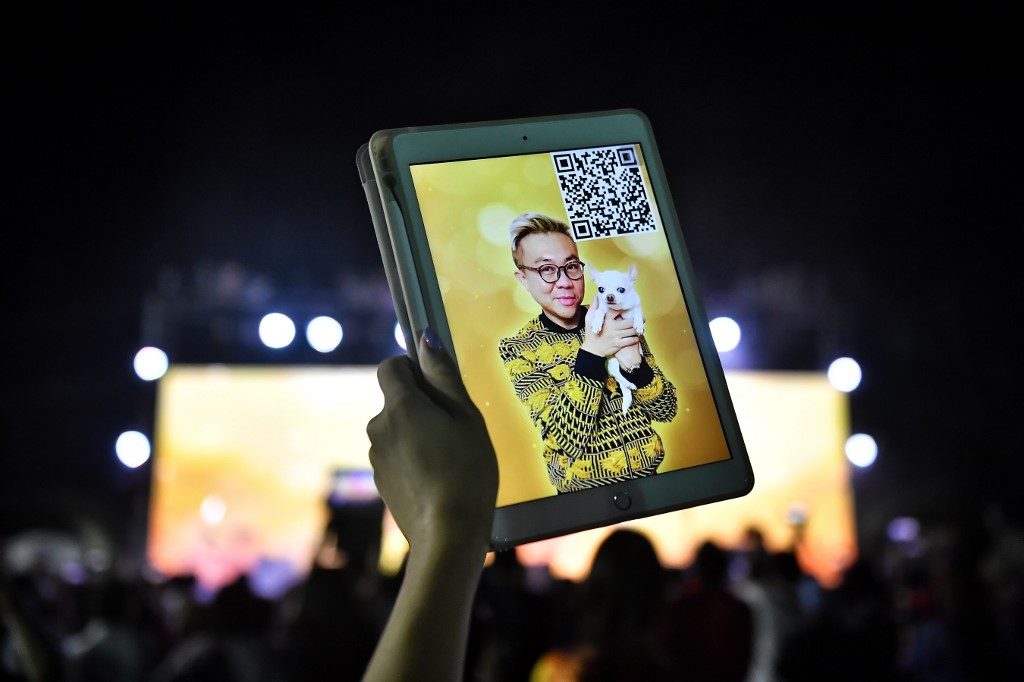 A protester holds a picture of self-exiled Thai academic Pavin Chachavalpongpun as he delivers an address through a live video call to condemn the military-aligned government of Thailands Prime Minister Prayut Chan-O-Cha during a pro-democracy rally at Thammasat University in Pathum Thani, north of Bangkok, on August 10, 2020. (Photo by Lillian SUWANRUMPHA / AFP)

Young Thai protesters listened in rapt attention on Monday night, August 10, as a pro-democracy activist called for open discussion of the unassailable monarchy’s role in the kingdom, at a rally in Bangkok that drew thousands.

The student-led movement has repeatedly demanded a rewrite to a 2017 constitution, the parliament’s dissolution, and called for the government to “stop threatening the people.”

Protesters regard former army chief Prayut, who led a 2014 coup, as a remnant of Thailand’s junta legacy as his premiership was ushered in under a military-scripted charter in last year’s poll.

But activists have waded further into sensitive territory by calling for the abolition of the kingdom’s draconian royal defamation law, which protects the powerful, super-rich King Maha Vajiralongkorn. 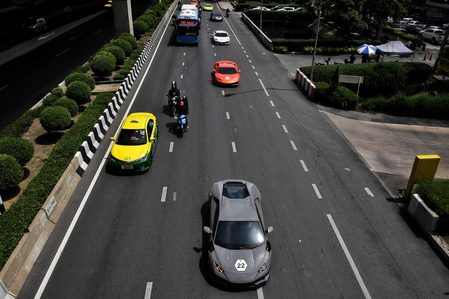 Monday’s rally outside Bangkok – which started off with anti-government songs – ended with speeches by two activists who were arrested over the weekend and later released on bail.

Lawyer Anon Numpa and activist Panupong Jadnok were charged with sedition for their alleged role at a massive July 18 rally.

But their arrests came days after Anon led a discussion at a protest of the monarchy’s role in the kingdom.

He revisited the topic onstage Monday night, calling for the frank discussion of the unassailable institution.

Protesters held up a three-finger salute, a symbol for freedom taken from “The Hunger Games” trilogy, after his speech.

The king sits at the apex of Thai power, buttressed by the powerful military and elite billionaire clans.

The royal defamation law carries a sentence of up to 15 years per charge, and experts say the law’s vagueness makes open reporting or discussion of the royal family virtually impossible.

Organizers said the next rally will be on Wednesday, which is a public holiday in Thailand commemorating the Queen Mother’s birthday.

Monday’s rally closed with a video conference call by prominent Thai dissident Pavin Chachavalpongpun, a Kyoto-based academic who was granted asylum in Japan following his vocal criticism of Thailand’s junta, broadcast on stage.

Held at Thammasat University, the protest drew a diverse crowd from the LGBTQI community, high schoolers, and elderly pro-democracy supporters.

“Us seniors must support the students,” said a 70-year-old woman who declined to be named. “We must fight for our sons, daughters, nephews, and nieces.”

The kingdom has long been locked in a cycle of violent street protests and coups by a putsch-happy army.

The coronavirus pandemic seized up Thailand’s economy, leaving millions jobless and angry at the inequalities of a society perceived to favor the kingdom’s elite establishment.

“No more fake democracy,” read a sign at the demonstration, which drew around 4,000 by nightfall, according to an AFP estimate.

At the end of the night, the hashtag “Thammasat will not tolerate” was trending on Thai Twitter.

Prayut has vowed to hold public forums with young people.

But army chief Apirat Kongsompong – an arch-royalist who in the past has angrily ranted about pro-democracy figures – called “hatred of the nation” an incurable disease.

Earlier Monday, a group of royalist supporters marched to parliament to counter a pro-democracy rally where protesters were burning models of army tanks and the constitution.

Holding portraits of the monarch above their heads, the pro-monarchy group called for the protesters not to insult the king and carried posters saying “The people protect the king.”

Besides the arrests of two activists over the weekend, protest organizers in northern Phitsanulok province were detained for hours without charge, according to a Thai legal aid group. – Rappler.com