LATEST PROTEST. Pro-democracy protesters hold up large inflatable yellow ducks, which have recently become a symbol of the demonstrations, and other inflatable figures during an anti-government rally in Bangkok on November 27, 2020.

Thousands of democracy activists blocked a major junction in Bangkok Friday, November 27, to rehearse “coup prevention” strategies in the latest round of Thailand’s anti-government protests.

The country has for months been rocked by youth-led protests demanding a new constitution, reform of the untouchable monarchy, and for Prime Minister Prayut Chan-O-Cha to resign.

Prayut, who came to power in a 2014 coup, this week played down the prospects of being overthrown or introducing martial law.

Inflatable Santa Claus figures joined the bright yellow rubber ducks that have become a symbol of the movement as some 5,000 demonstrators massed in the shadow of a motorway flyover in the north of the capital. 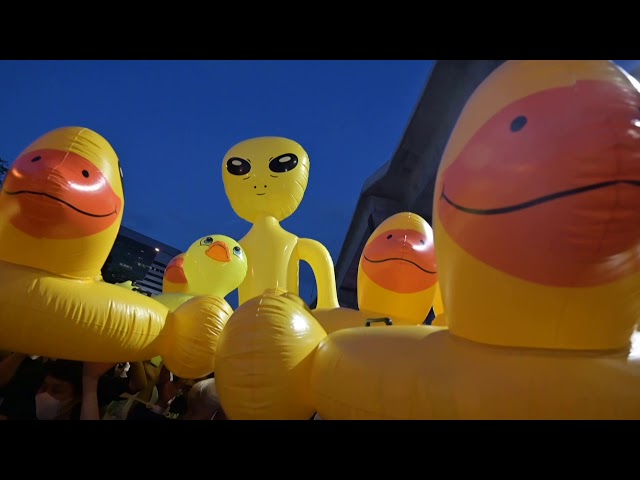 Natalie, a 32-year-old Bangkok office worker, said the last coup was disastrous for Thailand and warned the country shouldn’t go down that path again.

“Now is a crisis time in Bangkok and Thailand. I want new elections and to change the prime minister and for a new government to actually listen to the people,” she told Agence France-Presse (AFP).

As part of what they called “coup prevention” drills, protesters passed an armada of the pool toy ducks over their heads, to represent the military passing over the people to take the front row of Thai politics.

Another group paraded portraits of generals who had led past coups before ritually burning them.

Army chief Narongphan Jittkaewtae has rejected coup rumors, saying the chance of another putsch was “less than zero.”

“I don’t think he will be ousted because he still has strong support from conservatives…and big businesses,” he told AFP.

But in a country that has seen a dozen coups since it became a democracy in 1932, the current round of protests, which began in July, has fueled rumors another could be looming.

The movement has broken new ground for Thai political activism by demanding changes to the monarchy, a once-revered institution which some in the kingdom are beginning to question.

Next week a constitutional court in Bangkok will rule on whether Prayut has broken rules by living in an army house, despite the fact the former general is no longer in the military’s top brass.

Losing the case could see Prayut forced out of office. – Rappler.com