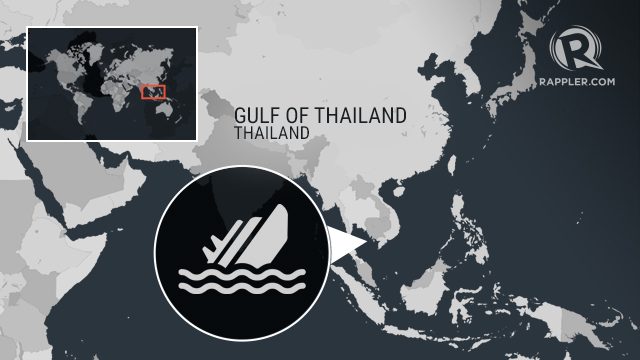 BANGKOK, Thailand –Thailand’s military deployed warships and helicopters on Monday, December 19, to try to locate 33 marines missing after a corvette sank overnight in choppy waters in the Gulf of Thailand, the navy said.

Three navy vessels and two helicopters were sent to find the missing off Prachuap Khiri Khan province, south of Bangkok, after the HTMS Sukhothai warship suffered an engine malfunction and went down just before midnight about 20 nautical miles off the coast.

An overnight rescue mission in bad weather secured 73 of the 106 people aboard, the navy said, with the remaining 33 forced to abandon ship.

The navy posted images and video footage on its Twitter account showing a group of personnel in orange vests in a black inflatable raft moving away from a ship in darkness as waves swelled around it. It was not immediately clear how many rafts had been deployed.

The Sukhothai, a US-built corvette in use since 1987, was hit by strong waves on Sunday, forcing it to tilt to one side before becoming flooded with seawater, navy spokesperson Admiral Pogkrong Monthardpalin said.

A picture shared by the navy showed the grey vessel flipped over onto its side, while another image on a scanner screen showed the bow of the ship and a gun turret poking out above the waterline as it went down.