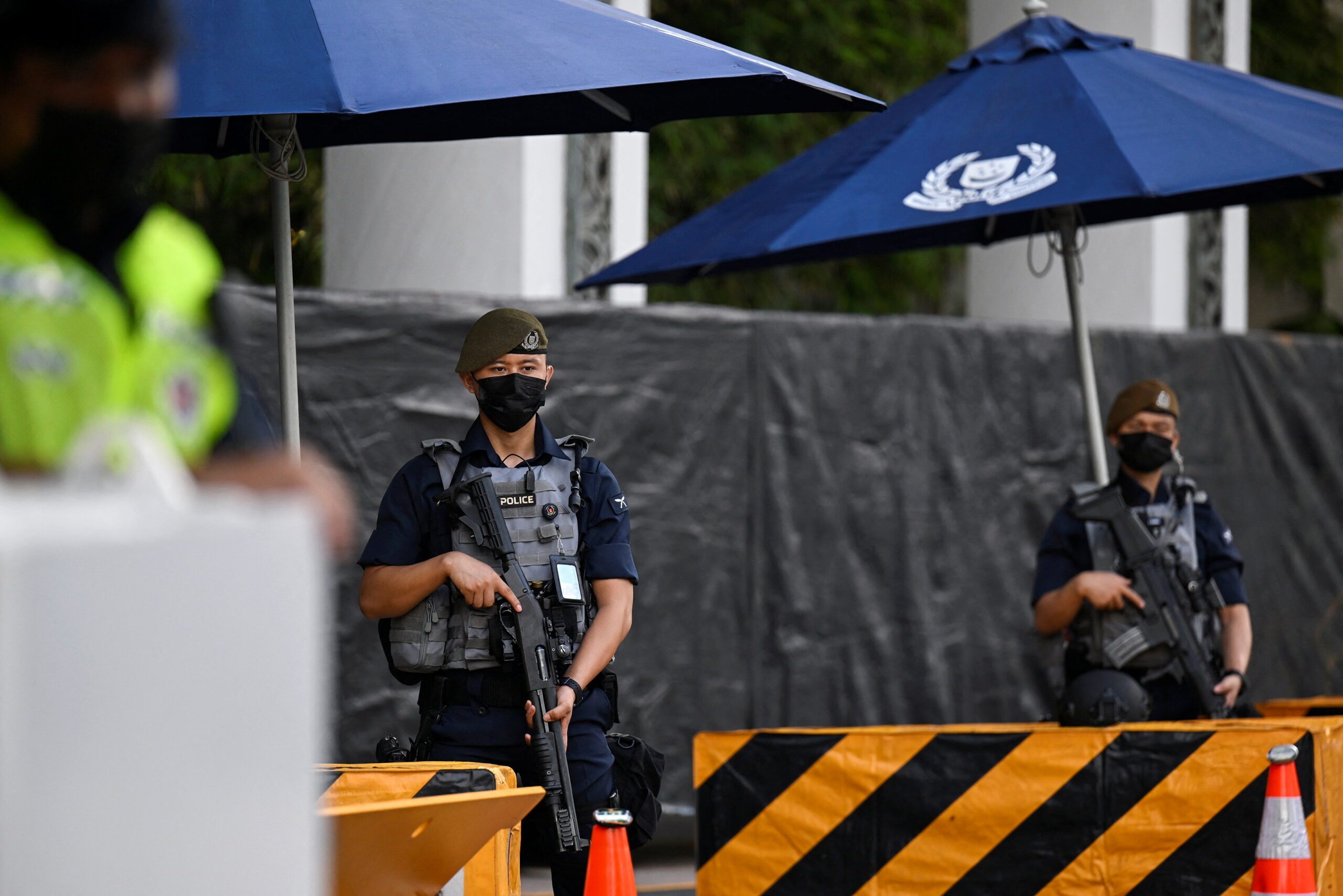 Gurkhas stand guard at the entrance of the venue of the 19th Shangri-La Dialogue in Singapore, June 10, 2022. REUTERS/Caroline Chia

Facebook Twitter Copy URL
Copied
(1st UPDATE) Before the meeting, a senior US official said the focus would be about trying to set guard rails in the tense relationship between the two countries

SINGAPORE – The defense chiefs of China and the United States held face-to-face talks for the first time on Friday, June 10, with both sides standing firm on their opposing views over Taiwan’s right to rule itself.

US Defense Secretary Lloyd Austin and Chinese Defense Minister General Wei Fenghe met on the sidelines of the Shangri-La Dialogue security summit in Singapore for nearly an hour, double the time initially allotted.

Austin and Wei’s first face-to-face meeting comes as US President Joe Biden is seeking to spend more time on Asian security issues after months of focus on Russia’s invasion of Ukraine. The two defense chiefs spoke by phone in April.

Although both sides say they want to better manage their relationship, Beijing and Washington remain polarized over several volatile security situations, from Taiwan’s sovereignty to China’s military activity in the South China Sea and Russia’s invasion of Ukraine.

After the meeting, Chinese and US officials highlighted the cordiality of proceedings in a sign it could help open the door to more communication between the two militaries.

However, there was no evidence of any breakthrough on settling long-running security disputes.

Wei said the talks “went smoothly”. A Chinese defense ministry spokesman later said Wei reiterated Beijing’s firm stance on Taiwan, which is that it is part of China.

“The PLA (People’s Liberation Army) would have no choice but to fight at any cost and crush any attempt of Taiwan independence, safeguarding national sovereignty and territorial integrity,” the spokesman said.

Austin called on China to “refrain from further destabilizing actions” on Taiwan, a US statement issued after the talks said.

A US official, speaking on the condition of anonymity, said the bulk of the meeting focused on Taiwan and Austin reiterated that Washington’s position on Taiwan was unchanged, while criticizing China’s military aggression.

“The United States has major concerns about increasing PLA behavior, particularly unsafe, aggressive, unprofessional behavior and is concerned that the PLA may be attempting to change the status quo through its operational behavior,” the official said after the meeting.

The United States is Taiwan’s most important international supporter and arms supplier, a source of constant friction between Washington and Beijing.

China, which claims self-ruled Taiwan as its own territory, has increased military activity near the island over the past two years, responding to what it calls “collusion” between Taipei and Washington.

A Chinese fighter aircraft dangerously intercepted an Australian military surveillance plane in the South China Sea region in May and Canada’s military has accused Chinese warplanes of harassing its patrol aircraft as they monitor North Korea sanction evasions.

The meeting between Austin and Wei also touched on other issues, including crisis communication and Russia’s invasion of Ukraine.

During the meeting, Austin “strongly discouraged” China from providing material support to Russia for the war. In response, China’s defense spokesperson said it did not provide Russia with military assistance.

This year, Washington warned that Beijing appeared poised to help Russia in its war against Ukraine.

China has not condemned Russia’s attack and does not call it an invasion, but has urged a negotiated solution.

Beijing and Moscow have grown closer in recent years, and in February, the two sides signed a wide-ranging strategic partnership aimed at countering U.S. influence and said they would have “no ‘forbidden’ areas of cooperation”. – Rappler.com