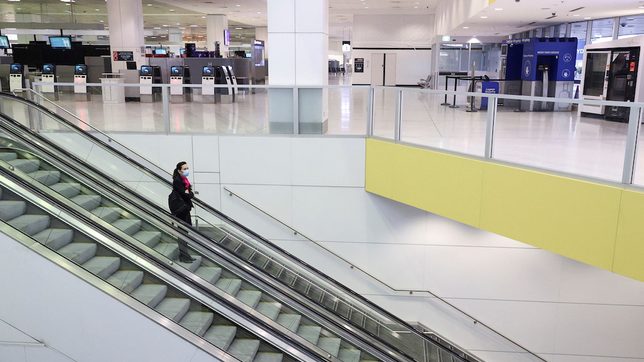 AIRPORT. A flight crew member stands on an escalator in the international terminal at Sydney Airport on November 30, 2021., as countries face the new coronavirus Omicron variant.

SYDNEY, Australia – Australia’s COVID-19 cases touched a fresh pandemic high on Tuesday, January 4, amid an Omicron surge in its two most populous states as hospitalizations in New South Wales state, home to Sydney, surpassed the record numbers hit during the Delta outbreak.

People admitted in New South Wales hospitals rose to 1,344, a new pandemic peak, topping the 1,266 reached last September during the Delta wave. Numbers have more than doubled in a week, straining the health system.

A record 47,799 infections have been reported in Australia so far on Tuesday, eclipsing its previous high of 37,212 a day earlier. Four new deaths were registered.

Despite the record spike in infections fueled by the Omicron strain, dual-dose vaccination levels of nearly 92% in people above 16 have helped Australia to keep the death rate lower than the previous virus outbreaks.

Authorities do not specify the coronavirus variant that caused the deaths, although New South Wales officials said 74% of patients in the state’s intensive care units since December 16 were infected with the Delta variant.

Australia is also battling a shortage of rapid antigen tests, delays with PCR results and the abrupt closures of a number of testing sites, with pathology laboratories swamped by a backlog of tests. Prime Minister Scott Morrison ruled out the government covering the cost for people to test themselves for COVID-19.

“The problem at the moment is that the lack of (rapid antigen tests) is completely hampering personal responsibility and it is a frustration that is a glaring hole in the current management of COVID,” Chris Moy, vice president of the Australian Medical Association, told ABC Radio on Tuesday.

Australia’s competition regulator said it would set up a team to look into complaints about allegations of price gouging for the at-home rapid antigen tests.

The record spike in infections and hospitalizations have come as 2 million more Australians became eligible for their COVID-19 booster shots from Tuesday after authorities shortened the wait time between second and third shots to four months.

Just over 2.5 million Australians have so far received their booster shot, which health officials are betting may prevent more hospitalizations and deaths.

Australia on Tuesday crossed half a million coronavirus cases since the pandemic began, with nearly 50% reported in the last two weeks. Still, the country’s 547,160 cases and 2,270 deaths are lower than numbers seen in many comparable countries. – Rappler.com