Rodrigo Duterte: ‘I am in a quandary’ 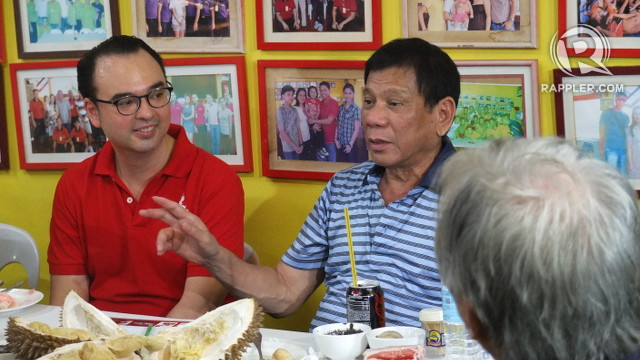 DAVAO CITY, Philippines – “I am really in a quandary. Kung sa akin lang, ayaw ko talaga, ayaw ko (If it was just me, I really don’t want it.)”

Davao City Mayor Rodrigo Duterte said this in a corner of After Dark, one of his favorite “watering holes” in the city.

It’s 1 am on Wednesday, September 30. He had just finished his cup of coffee and one turn in front of the karaoke screen, his reward for a long night’s work that included hours of discussions with the Cayetano siblings.

The morning before, Senator Alan Peter Cayetano had declared his bid for the vice presidency and his wish to have Duterte as his running mate.

A few steps away, the senator was conversing with one of Duterte’s staff. Cayetano’s wife Lani was taking her turn in front of the microphone.

Some of his close friends have not tired of insisting it is his destiny to be the Philippine president. A large gathering of his supporters in Rizal Park last weekend pushed him to respond with a text message that is now the basis for their hopes.

Videos of an Overseas Filipino Worker begging him to run and a little girl offering her piggy bank savings to his campaign also have their effect on him. Women and children are his weak spots.

Here is the video of the OFW:

Add to that a hopeful Cayetano going all the way to Davao City, prompting some social media users to call the “courtship” “AlDab” or “Alan in Dabaw” in reference to the popular kalyeserye romance.

Duterte said another vice presidential hopeful is arranging to meet with him very soon.

“Other candidates are searching for their vice presidents. I have too many!” he told Rappler.

If he runs and wins, he could turn his dream of a federalist Philippines into reality. He could implement the initiatives and policies he loves to explain when pressed about his possible platform.

He could be the driving force in tackling what he perceives are the country’s biggest problems: criminality, poverty, and terrible infrastructure.

But what turns him off from the idea of being president?

Not his own, but those below him who he will not be able to control. If he finds out one of his appointees is corrupt, he won’t hesitate to slap his face in front of the entire country, he said.

He also fears failure and a fall from grace. He has a sterling record as Davao City mayor. But after his presidency, history may not judge him as mercifully, he said.

All these worries are separate from the opposition to his presidential bid that many in his family, particularly the women, have expressed. His daughter Sara is often named the chief oppositor but there’s also his youngest daughter, 11-year-old Veronica.

He has yet to finish consulting with his family, a critical aspect of his “final soul-searching.”

He also worries that a presidency will only lead to the jail cell.

“It will be a bloody presidency,” he said grimly, alluding to his war against criminals.

He has until October 16, the last day of filing of candidacy, to make his decision.

But he can reserve his worries for the morning. For now, he’ll enjoy what remains of the fingerfood on the table and perhaps one more go at the microphone. – Rappler.com