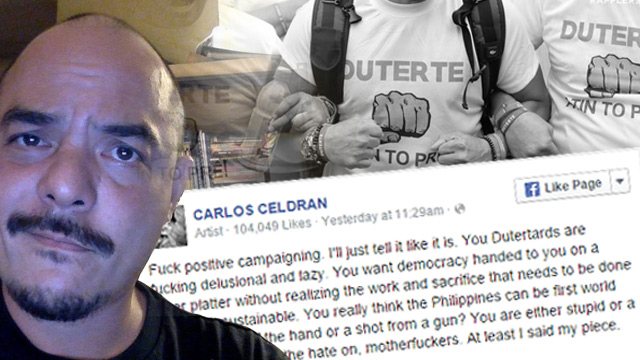 MANILA, Philippines – “Dutertards” was the term artist and tour guide Carlos Celdran coined when he lashed out against the supporters of Davao City Mayor and presidential candidate Rodrigo Duterte.

Celdran called out the “Dutertards” (a combination of “Duterte” and the derogatory “retard”) and wrote he was fed up with “positive campaigning.” He then railed against Duterte’s supporters and described them as “stupid, a child, or both,” referring to what he saw as their delusional belief in a speedy democracy.

Fuck positive campaigning. I’ll just tell it like it is. You Dutertards are fucking delusional and lazy. You want…

“You want democracy handed to you on a silver platter without realizing the work and sacrifice that needs to be done to make it sustainable,” Celdran wrote.

Celdran also expressed his distaste for Duterte’s brand of discipline: “You really think the Philippines can be first world with the wave of the hand or a shot from a gun?”

The Davao City Mayor, branded as “Duterte Harry,” is known for ruling with an iron fist and for supporting the death penalty. (READ: Duterte and Davao Death Squad: ‘Defending the indefensible’)

The post ended with Celdran challenging Duterte’s supporters to “bring the hate on,” which they did through the comments section. The post proved to be polarizing as reactions were separated into two camps.

Many of Duterte’s supporters stressed the country’s need for “discipline over democracy.” Several cited Singapore as an example of the positive results of discipline in governance.

Many netizens wrote the current system has not produced results and has pushed the Philippines into worsening inequality. They are confident Duterte would bring change. (READ: Netizens on Duterte’s decision: He was our last hope for a better PH)

Celdran issued biting responses to many of the comments, particularly those accusing him of being the Liberal Party’s hired hand. He had previously expressed support for LP standard-bearer Manuel “Mar” Roxas II and vice presidential bet Leni Robredo.

However, some users pointed out that Celdran was risking “sinking” to the level of Duterte’s supporters. A comment from Andy Tagibe read: “I thought you hated ad hominem attacks? Instead of attacking the so-called tards, why don’t you educate them?”

Celdran said he wrote the post “for (his) sanity,” adding that “there’s no educating these people without a firm hand.”

As of this writing, Celdran’s status has been shared 570 times and has gotten around 2,500 reactions.

Maria Ressa, Rappler’s CEO and executive director, has stressed the role of social media and its users. “These will be the first social media elections,” Ressa told the audience of a #PHVote event in Davao. “And these elections will change our lives. It may not seem that way, but they will.”

Senator Miriam Santiago, another presidential candidate, predicted that the 2016 elections would be “determined by social media.”

The presidential candidates all have their own Facebook pages, where they post campaign updates and offer their views on various issues.

Their supporters have also been active online – sharing the candidates’ posts and uploading campaign materials they made themselves.

As the 2016 elections draw nearer, social media and how people choose to use it could affect the polls’ outcome. – Rappler.com