Itogon: When the land of promise buried its people

BAGUIO CITY, Philippines – The choices that shaped the gold-embedded earth in Itogon, Benguet, could not be confined to the days before the fatal landslide.

As Presidential Adviser Francis Tolentino said in a chance interview at ground zero of the disaster, the tragedy is also the result of “decades'” worth of problems.

The failure to follow the laws regulating land – long before Typhoon Ompong (Mangkhut) – was already ominous for Itogon. 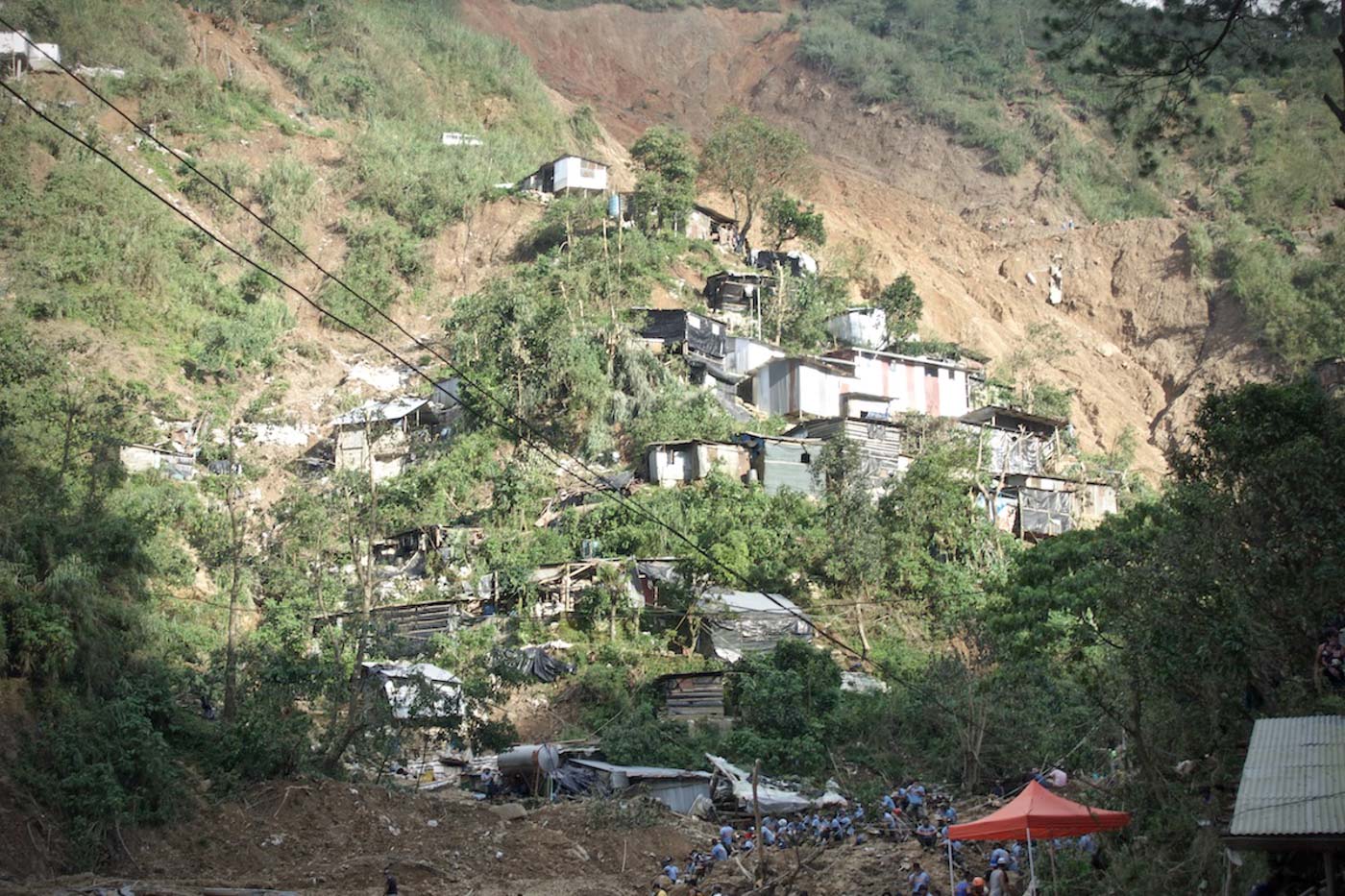 For the local government of Itogon, led by its Mayor Victorio Palangdan, the miners would not have been exposed to the disaster if they did not live atop the doomed land.

Under scrutiny is Benguet Corporation, the owner of the two-story building miners and their families called home.

The oldest mining company in the Philippines, Benguet Corporation was the first to drill the mountains of Itogon for gold, operating in the town since 1903 or just 5 years after the Spaniards gave the Philippines to Americans.

The company has completed both open-pit and underground mining. What used to be its open-pit quarry has been transformed by the company into a water reservoir since the end of its operations in 1997.

The underground mining in Antamok, which the company scooped until 1992, has not been fully rehabilitated as of this year. Mayor Palangdan claims that it was in the shadow of one of these unrestored mountains where the wiped out bunkhouse of miners used to stand.

For Norly Mercado, executive director of the Legal Rights and Natural Resources Center, the company violated Republic Act No. 7942 or the Philippine Mining Act of 1995.

In Section 35, which sets minimum requirements for mining contracts of the Philippine government with mining groups, the law required:

“[That] the proponent to effectively use appropriate anti-pollution technology and facilities to protect the environment and to restore or rehabilitate mined out areas and other areas affected by mine tailings and other forms of pollution or destruction.”

Benguet Corporation says they have never abandoned their stakes in the area, and even issued notices to the mining community to leave the area because of their claims and also the risks of living there. Their plan to rehabilitate has apparently been delayed because of “reasons beyond its control.” 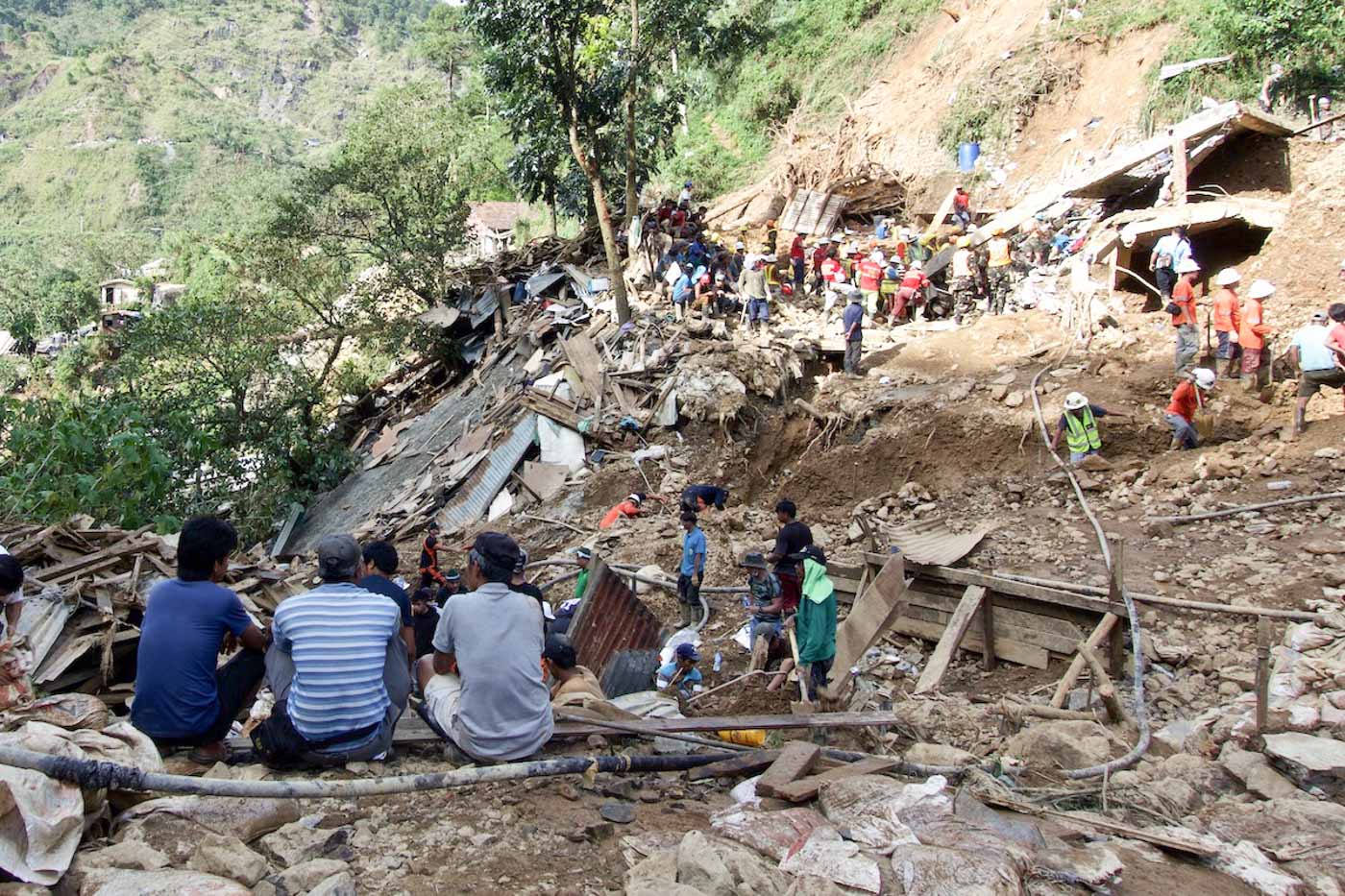 For centuries already, Cordillerans have mined their mountains.

“Bago pa ang Spanish era nagmimina na kami dito (Even before the Spanish era, we have been mining here),” said Palangdan in an interview with Rappler.

The practices have been passed on despite colonizers and mammoth companies sharing the soil. Itogon men, as early as their boyhood, have learned how to mine the mountains.

“It was easy to learn, all you need is your bare hands,” a police official who grew up in Benguet said.

Over decades, pocket mining had taken the shape of an organized industry in Itogon with the emergence of “associations,” where groups of miners secure their permits and get sponsors for their daily living, in exchange for sharing a portion of their finds.

What’s left for miners to keep, they spend for themselves and their families.

Palangdan said they have recorded 32 mining associations in Itogon alone. Each of them has at least 1,000 members coming from Benguet and Ifugao. Of all the associations, the local government records only about 4 having permits. This means thousands of miners have been mining in Itogon unregulated for years.

As far as law enforcement is concerned, the government has effectively been paralyzed, allowing miners to dig freely. Itogon top cop Senior Inspector Heherson Zambale admitted that they have caught no illegal miner in their town. They simply have no authority to do so.

Police need to be deputized by the Department of Environment and Natural Resources (DENR) before they could catch illegal miners.

So far cops have only been deputized to prevent illegal logging, emphasized police Director for Operations Chief Superintendent Ma-o Aplasca, who oversees policy governing police operations across the Philippines.

Palangdan claimed that his government has been trying to call on the DENR to finally deputize their cops, but he said his requests have not been heeded. The local government could not simply evict the miners and their families as the land was under the control of Benguet Corporation.

Itogon has no zoning law 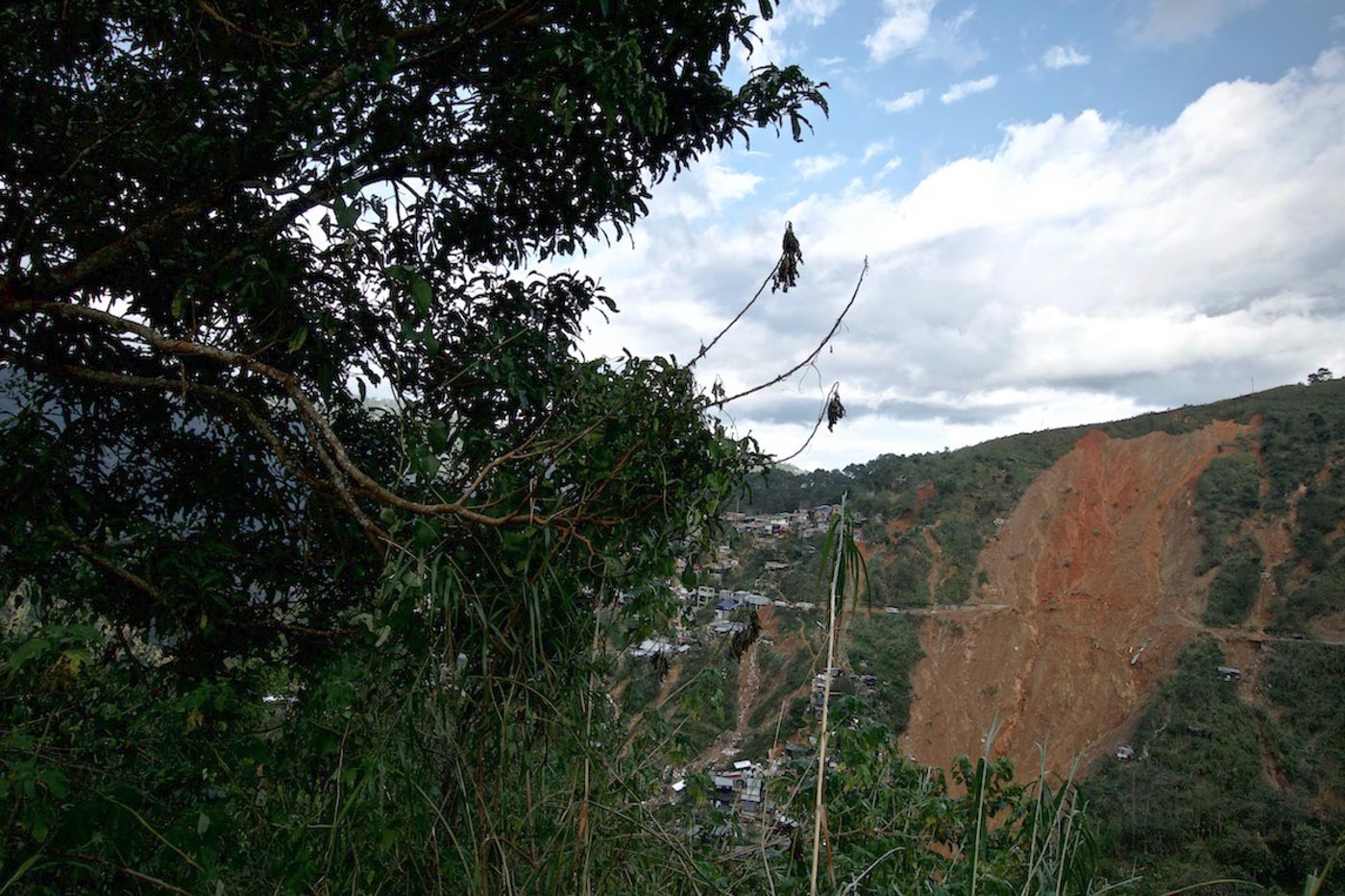 As early as 2013, Palangdan went to Malacañang, pleading for an executive order from then-president Benigno Aquino III to return the land to the local government.

Then a newbie local chief, Palangdan was shocked when he was asked by Malacañang’s legal department for something he could not provide: Itogon’s comprehensive land use plan and zoning regulations if ever they got back the land.

Since then, Palangdan claimed, they have already completed the land use plan, but their town council has not yet approved it. The Itogon local government could not share the documents because the roads leading to their town hall have been blocked with debris.

With his town being the most devastated by Ompong, Palangdan will try his luck with President Rodrigo Duterte, who himself is a veteran mayor.

“I am planning to make another letter to Duterte, now complying with what the legal department has given to me,” Palangdan said.

They are racing against time. The countdown has begun for the 2019 elections, which is expected to sweep the agenda of the government.

For the victims of Itogon, on the other hand, the deadline for relocation to safer neighborhoods has long lapsed.

And to those who survived? 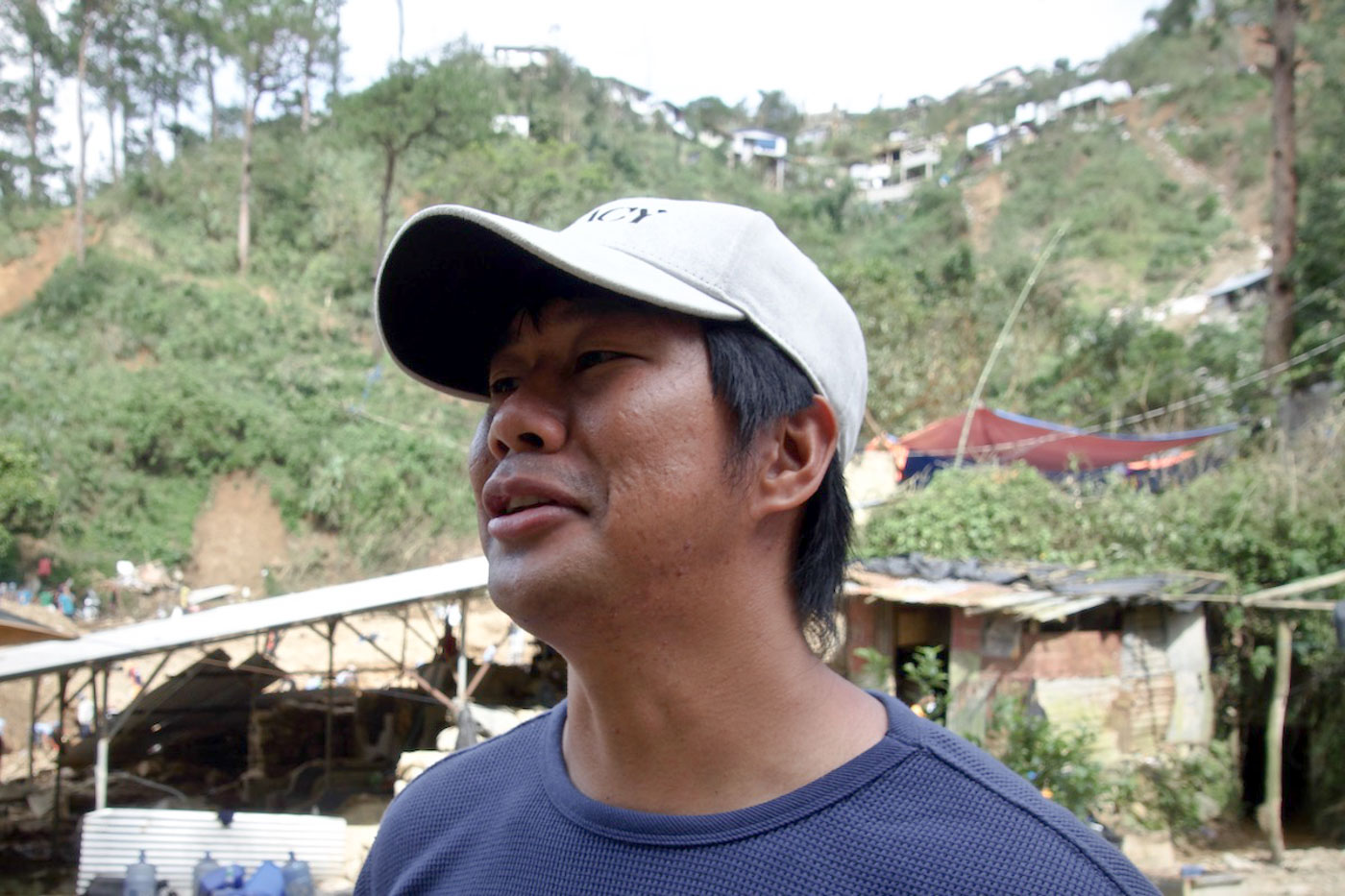 Now the people of Itogon are scrambling for the light at the end of the tunnel. 80% of them, according to Palangdan, are dependent on mining.

This was the lifeline at risk when DENR Secretary Roy Cimatu unceremoniously ordered the termination of all small-scale mining operations in the Cordillera Administrative Region.

As livelihood replacement, Palangdan, looking years ahead, is already planning for their town to become a coffee bean planting powerhouse.

Disaster scientist Mahar Lagmay said that this recovery is just as important as preparing for the next storm.

For those who fault the miners for living near the mines, Lagmay said it is more the norm than the exception, explaining “our natural affinity” to hazardous places.

True resilience finds its place, he explained, in how people – led by officials and working with private businesses – adjust to living with these dangers surrounding them.

Such is the story of the Itogon miners: they had hoped to find gold in the blessed land of the Cordilleras, which buried them in the end. 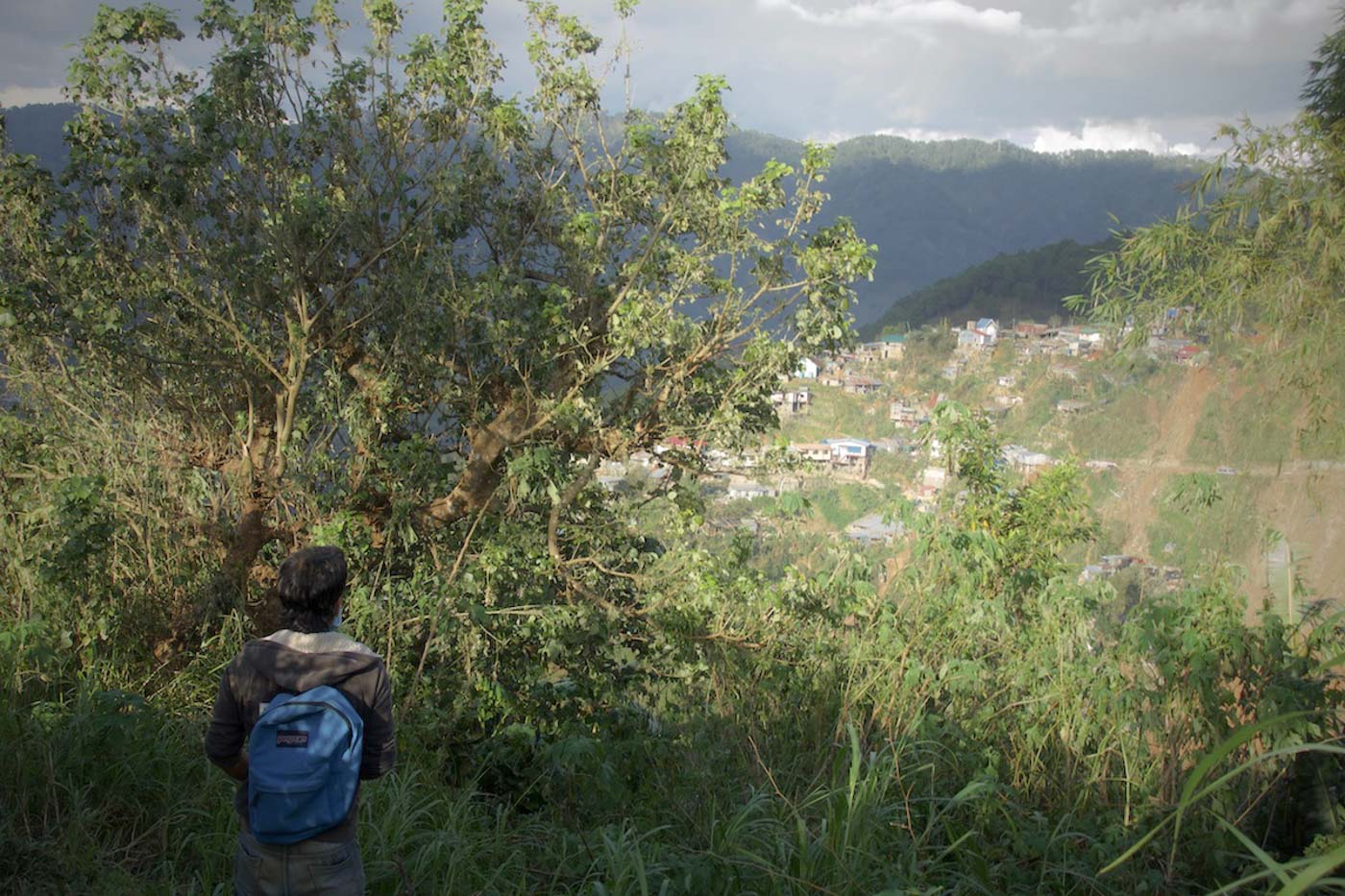