MANILA, PHILIPPINES — Chess is great. But is “The Think! Game“ greater?

The 1970s was a great time for chess. It was then when the likes of Bobby Fisher and Garry Kasparov took it to global fame. Arguably, no other board game shared the same reach and glory as chess.

But in the then-remote city of Bacolod, a Negrense named Reynato Sian refused to bow down to the King of Board Games and sought to build a better and more challenging game – one that mirrors real life strategies and principles which he believed chess lacked.

That’s when he came up with “The Think! Game,” a board game that he believes personifies the human mind at work, mobilizing one’s instinct, reasoning, judgment, and wisdom. 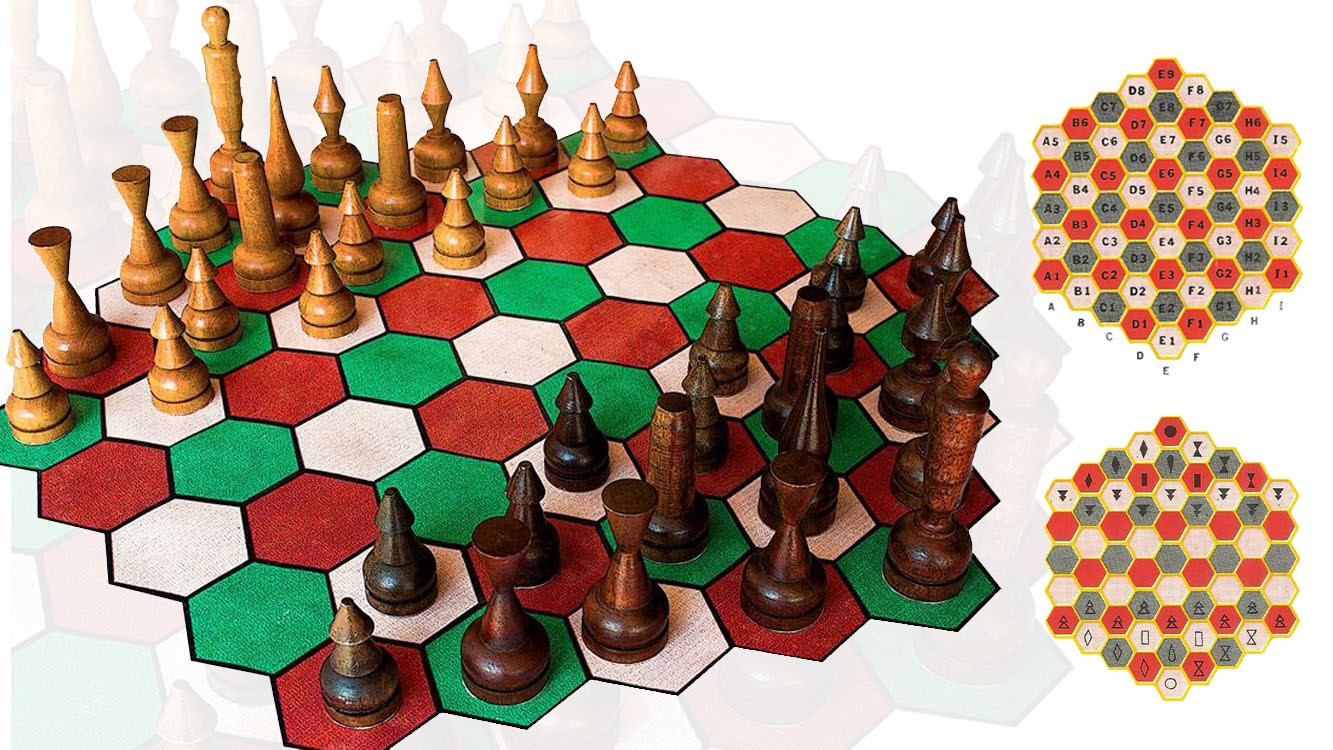 More than 4 decades since, Sian, with the help of his son-in-law Jeffrey Sy, moved to finally give The Think! Game the recognition they believe it deserves.

Sian and the supporters of the game, who call themselves “thinknologists,” describe the game as a holistic mental exercise designed to radically enhance and improve the learning process, promote critical thinking, and intellectual development.

The group believes it is the answer to the country’s ailing education system which will help improve individual organizational and analytical skills, and wants to incorporate it into the Department of Education (DepEd) curriculum, recommending it to Grade 1 to College students.

Russia, US, and Australia have incorporated mental exercises such as chess as part of their learning programs in school. In 2009, DepEd released a memorandum incorporating chess in the curriculum as a strategy to improve children’s academic performance.

Similar to chess, The Think! Game is also a highly educational game that engages the players’ logical, analytical, and critical thinking skills. It also sharpens their overall learning capabilities and decision-making skills.

What makes it better, however, is that it does not represent war strategies like chess and instead reflects real-life faculties that make it a better touchstone in developing not only one’s intelligence but also their character. To top it all, the game is a proud Filipino invention. 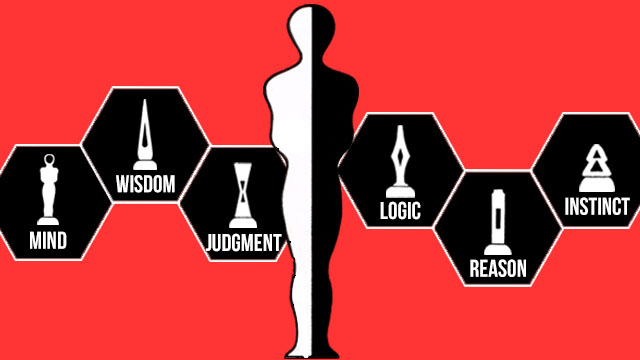 All these add to the potential of the game being a tool for the improvement of our human capital by making citizens better thinkers.

So, with their vision in mind and passion in their hearts, Sian and the “thinknologists” strive to get support for the game. 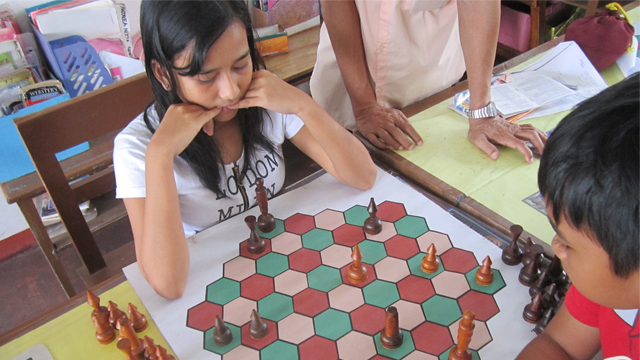 Recently, the group started visiting different schools and barangays in Bacolod to introduce the game to elementary students and are slowly expanding their campaign outside the city.

Awareness and funding are the group’s main concerns. They want more people to learn about it and are looking for investors and support from politicians who would see the value and potential impact of the game to the Filipino community.

They recognize that the way to reaching their goal would be a long and hard one, but they took it nevertheless.

The game of the mind

The Think! Game is played by two players with 19 game pieces each on a hexagonal arena composed of 61 hexagon tiles. The pieces were named after the mental faculties of man – instinct, reason, judgement, wisdom, and the mind. The pieces are then deployed by the players to achieve the main objective of the game: to capture of the opponent’s Mind piece.

Just like chess, The Think! Game is a highly strategic game with each piece having their own strengths and weaknesses reflecting their real life counterparts. The game allows various movements of pieces across the board, giving players even more variations of tactics and strategies.

Several national and international chess masters lauded the game, with some of them admitting that it is even more challenging than chess. 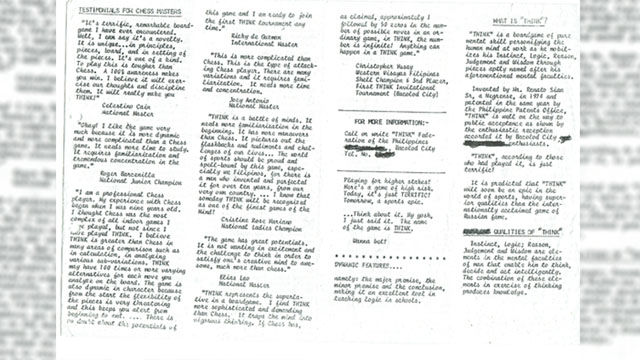 “This is more complicated than chess. There are many variations and it requires more familiarization,” said Filipino chess grandmaster Joey Antonio in his testimonial.

“Think! is the battle of minds. It has more maneuvers than chess. It pictures out the flashbacks, rudiments, and challenges of our lives,” said international chess master Christine Rose Mariano.

According to Sian, a businessman in the early 70s decided to invest in the production and marketing of the game.

They attempted to introduce the game to the public through a tournament when they joined the Inventor’s Week in 1976. It immediately caught the interest of game enthusiasts who attended the event. The venture, however, was short-lived due to funding issues.

Their efforts also drew the attention of 4-time United States Open chess champion Yasser Seirawan, who went to the Philippines to promote The Think! Game. Seirawan’s company, International Chess Enterprises, wanted to manufacture and promote the game to the US and other countries. According to Sian, however, they ended up rejecting his offer due to some “onerous stipulations” in Seirawan’s proposal. 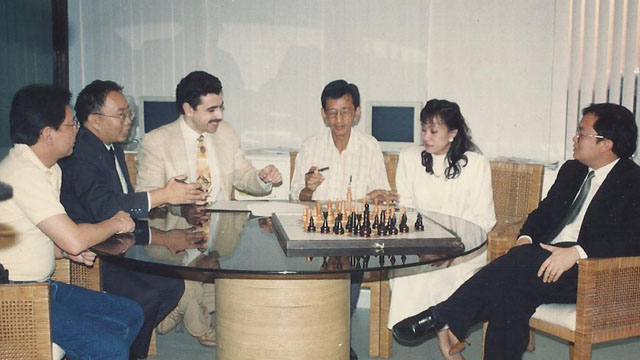 A few years after this, they introduced the game to national masters and grandmasters in an event held in Club Filipino in Greenhills, San Juan. The outcome was a success, as attested through their signed and documented testimonies.

This event was funded by a Dutch national, Yoopee Opitoom, who believed in the potential of the game.

Other offers to manufacture and distribute the game were also rejected due to their “disadvantageous nature,” according to Sian.

Eventually, he decided to indefinitely suspend his project and concentrate on other ventures.

It was only lately that the supporters of the game felt that the emergence of new technologies in gaming and education could open opportunities for the game to finally gain traction in the Filipino community. And so with a handful of advocates on board, they venture from barangay to another to get more support for the game.

They are hopeful that one day, this Filipino innovation would be able to stand as tall, if not taller, as the current King of Board Games.

Should The Think! Game be a part of Physical Education curriculum? Tell us what you think! (Pun intended.) – With a report from Stacy de Jesus/Rappler.com

You may also visit The Think! Game’s official Facebook page.