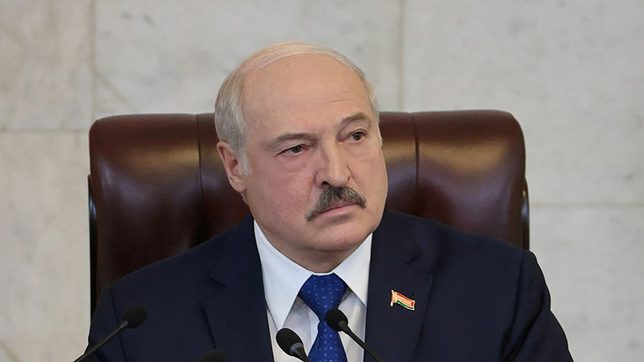 CORRUPT PERSON OF THE YEAR. Belarusian President Alexander Lukashenko delivers a speech during a meeting with parliamentarians, members of the Constitutional Commission and representatives of public administration bodies, in Minsk, Belarus, on May 26, 2021.

Facebook Twitter Copy URL
Copied
'It was a banner year for corruption, but Alexander Lukashenko stood out from the crowd,' says Organized Crime and Corruption Reporting Project cofounder Drew Sullivan

MANILA, Philippines – A nonprofit media organization named President Alexander Lukashenko as the 2021 “Person of the Year” for the repression and violent actions that he unleashed against critics and civil society in Belarus.

In an announcement on Monday, December 27, the Organized Crime and Corruption Reporting Project (OCCRP) said the panel of six judges “had no trouble selecting the post-Soviet autocrat” from the pool of 1,167 nominees, making it the first time in a decade that the decision was unanimous.

“It was a banner year for corruption, but Lukashenko stood out from the crowd,” panel member and OCCRP cofounder Drew Sullivan said.

Lukashenko has been in power as president since 1994. In 2012, he said during a Reuters interview that he is the “last and only dictator in Europe.”

He has faced intense scrutiny at home and abroad, with the European Union slapping Belarus with sanctions. Still, his government continues to dismiss claims of abuse despite incidents where critics and their allies are arrested and convicted of trumped-up charges, including Syarhei Tsikhanouski, the husband of opposition leader Sviatlana Tsikhanouskaya.

On December 22, a court also sentenced four anti-government protesters to between 18 and 20 years in prison for terrorism and arms trafficking offenses, which critics said were part of Lukashenko’s crackdown on dissent. “Anyone who challenges that image faces the same fate as dissident Roman Protasevich, who remains behind bars seven months after he was pulled from that Ryanair plane, or Sergei Tikhanovsky, who was just sentenced to 18 years in prison for organizing anti-government demonstrations in 2020,” the OCCRP said.

Lukashenko joins a long list of individuals named “Person of the Year,” whose leaderships have led to cultures of impunity, among others. Previous OCCRP “Persons of the Year” include Brazilian President Jair Bolsonaro in 2020, Russian President Vladimir Putin in 2014, and Philippine President Rodrigo Duterte in 2017 for his violent war on drugs. – Rappler.com