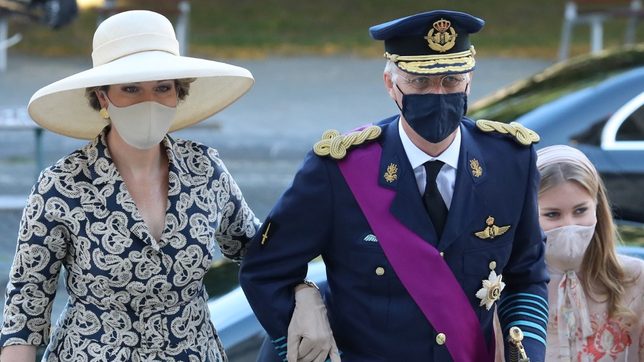 COVID-19 IN BELGIUM. Queen Mathilde of Belgium, King Philippe of Belgium, and Crown Princess Elisabeth, wearing protective face masks as precaution against the coronavirus pandemic, arrive for the Te Deum mass, on the occasion of Belgian National Day on July 21, 2020. Photo by Benoit Doppagne/BELGA/AFP

Facebook Twitter Copy URL
Copied
There have been 1,952 new cases around Belgium over the past week, up more than 70% on the previous week, officials say

Belgium is seeing a “worrying” rapid rise in coronavirus cases, health authorities warned Monday, July 27, with almost half of the new infections recorded around the port city of Antwerp.

There have been 1,952 new cases around Belgium over the past week, up more than 70% on the previous week, officials announced, as the country’s national security committee met to consider tougher measures to slow the spread of the virus.

“The rapid growth in the number of cases is worrying,” Frederique Jacobs, professor of infectious diseases and a spokeswoman for Belgium’s federal COVID-19 taskforce, told reporters.

She said the situation was particularly serious in the province of Antwerp, in northern Belgium, which recorded 47% of new infections in the last week.

Special local measures have been taken to try to contain the spike.

But Jacobs warned that “the number of infections is also rising considerably in the rest of the country”.

An average of 279 people a day contracted COVID-19 in the last week, compared with 163 a day the week before.

“Most infections are still coming among the active population, that is to say people aged between 20 and 59,” Jacobs said.

Since the start of the pandemic Belgium has recorded 66,026 cases and 9,821 deaths, according to the latest data published on Monday, after being one of the countries with the highest per-capita rates of infection at the height of the crisis in Europe.

Tougher rules on wearing masks came into force on Saturday amid growing fears of a second wave of the pandemic, with face coverings made obligatory in markets, hotels and busy shopping streets. – Rappler.com