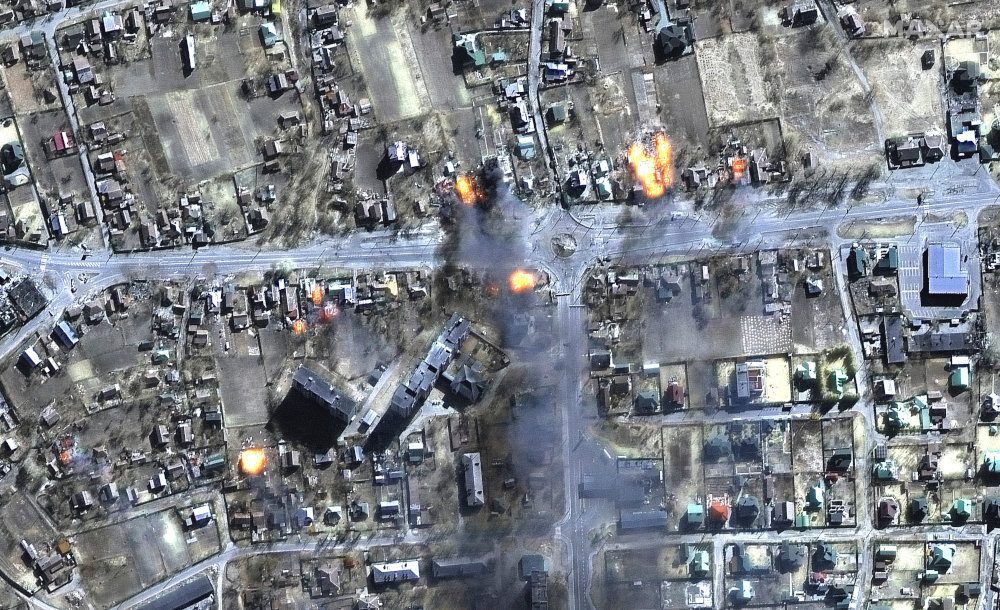 BURNING HOMES. A satellite image shows a close up of burning homes and a residential area in northeast Chernihiv, Ukraine on March 16, 2022.

Facebook Twitter Copy URL
Copied
The United States is offering an additional $800 million in security assistance to Ukraine to fight Russia, with the new package including drones and anti-armor systems

US President Joe Biden calling Russian leader Vladimir Putin a war criminal on Wednesday is “unforgivable,” the Kremlin said as it insisted the war in Ukraine was “going to plan” amid talk of compromise at peace talks.

Moscow has yet to capture any of Ukraine’s biggest cities following its invasion that began on February 24, the largest assault on a European state since World War Two, raising fears of wider conflict in the West unthought-of for decades.

Putin on Wednesday said he was ready to discuss neutral status for Ukraine but what he calls a “special military operation” to “demilitarize and denazify” the country was “going to plan” justified by the need to uphold Russian security. Ukraine and the West say Moscow is carrying out an unprovoked incursion.

Kremlin forces kept up their bombardments of besieged cities, including intensified shelling of the capital Kyiv as more than 3 million Ukrainians have fled and hundreds have died.

The United States is offering an additional $800 million in security assistance to Ukraine to fight Russia, with the new package including drones and anti-armor systems.

“More will be coming as we source additional stocks of equipment that … we are ready to transfer,” Biden said, later condemning Putin.

“He is a war criminal,” he told reporters.

At the request of Ukrainian President Volodymyr Zelenskiy, Washington will help Ukraine acquire additional long-range missile anti-aircraft systems as the West bolsters his government, which still hopes for a diplomatic solution.

Zelenskiy said negotiations with Russia were becoming “more realistic” and Russia’s foreign minister said proposals under discussion were “close to an agreement.”

The US Embassy in Kyiv said Russian forces had shot dead 10 people waiting in line for bread in Chernihiv, northeast of Kyiv. Russia denied the attack and said the incident was a hoax.

Footage from Ukraine’s state broadcaster showed bodies lying on the street. The Ukrainian general prosecutor’s office said it had opened an investigation.

Emergency services said rescue workers had found the bodies of five people, including three children, during searches of shell-hit residential buildings in Chernihiv.

In the besieged southern port of Mariupol, the city council said Russian forces bombed a theatre where civilians were sheltering. The number of casualties was not known.

Russia’s defence ministry denied it had carried out an air strike against the theatre. Reuters could not independently verify the information.

Maxar Technologies, a private US company, distributed satellite imagery that it said was collected on March 14 and showed the word “children” in large Russian script painted on the ground outside the red-roofed Mariupol Drama Theatre.

The governor of Zaporizhzhia region said Russian forces had fired artillery at a convoy of evacuees from Mariupol, wounding five people on Wednesday. Ukraine’s military said children were among the casualties.

Deputy Prime Minister Iryna Vereshchuk said 400 staff and patients were being held hostage at a hospital Russian forces had captured in Mariupol on Tuesday.

Russian troops have halted at the gates of the capital after taking heavy losses in a war Western officials say Moscow expected to win within days.

And as an information battle goes on alongside fighting, Facebook on Wednesday removed official Russian posts that falsely claimed reports of Russia bombing a children’s hospital in Ukraine were a hoax.

Russia has shifted its stance over the bombing that caused outrage around the world with a mix of statements that veered between aggressive denials and a call to establish clear facts.

In a speech to the US Congress by video link, Zelenskiy appealed for tougher sanctions on Russia and more weapons to help his country, repeating a request for a no-fly zone over Ukraine, something the West fears would worsen the conflict.

“In the darkest time for our country, for the whole of Europe, I call on you to do more,” said Zelenskiy, who showed video clips of dead and wounded children and blasted buildings.

Negotiations were due to resume on Wednesday by a video link for a third straight day.

The Kremlin said negotiators were discussing a status for Ukraine similar to that of Austria or Sweden, both members of the European Union that are outside the NATO military alliance.

Ukraine’s chief negotiator said Kyiv was still demanding a ceasefire and the withdrawal of Russian troops, with guarantees.

Zelenskiy has said Ukraine could accept international security guarantees that stopped short of its longstanding aim to join NATO, one of Russia’s main demands before it invaded.

“Neutral status is now being seriously discussed along, of course, with security guarantees,” Russian foreign minister Sergei Lavrov said. “There are absolutely specific formulations which in my view are close to agreement.”

Vladimir Medinsky, Russia’s chief negotiator, told state TV: “Ukraine is offering an Austrian or Swedish version of a neutral demilitarised state, but at the same time a state with its own army and navy.”

Kremlin spokesman Dmitry Peskov said the idea “could really be seen as a compromise”.

Austria and Sweden, the biggest of six EU members outside NATO, both have small militaries that cooperate with the alliance.

While Russia has long objected to Ukraine’s NATO ambitions, Kyiv and its allies have said Moscow’s true aim was to overthrow Ukraine’s pro-Western, elected leaders.

Ukrainian forces have withstood an assault by a much larger army. Zelenskiy said Ukrainian troops had killed a fourth Russian major general. Reuters was not able to verify this.

Ukraine said about 20,000 people had escaped besieged Mariupol in cars, but hundreds of thousands remain trapped under bombardment without heat, power or water. More than 3 million refugees have now fled Ukraine for other countries.

Russia was due to pay $117 million in interest on dollar-denominated sovereign bonds, but may pay in roubles instead, amounting to its first default on foreign debt since the Bolshevik revolution.

Moscow said it had the money, and Washington would be to blame if it cannot pay.

In his most explicit acknowledgment of the pain inflicted by Western sanctions, Putin said inflation and unemployment would rise, and structural changes to the economy would be needed. – Rappler.com