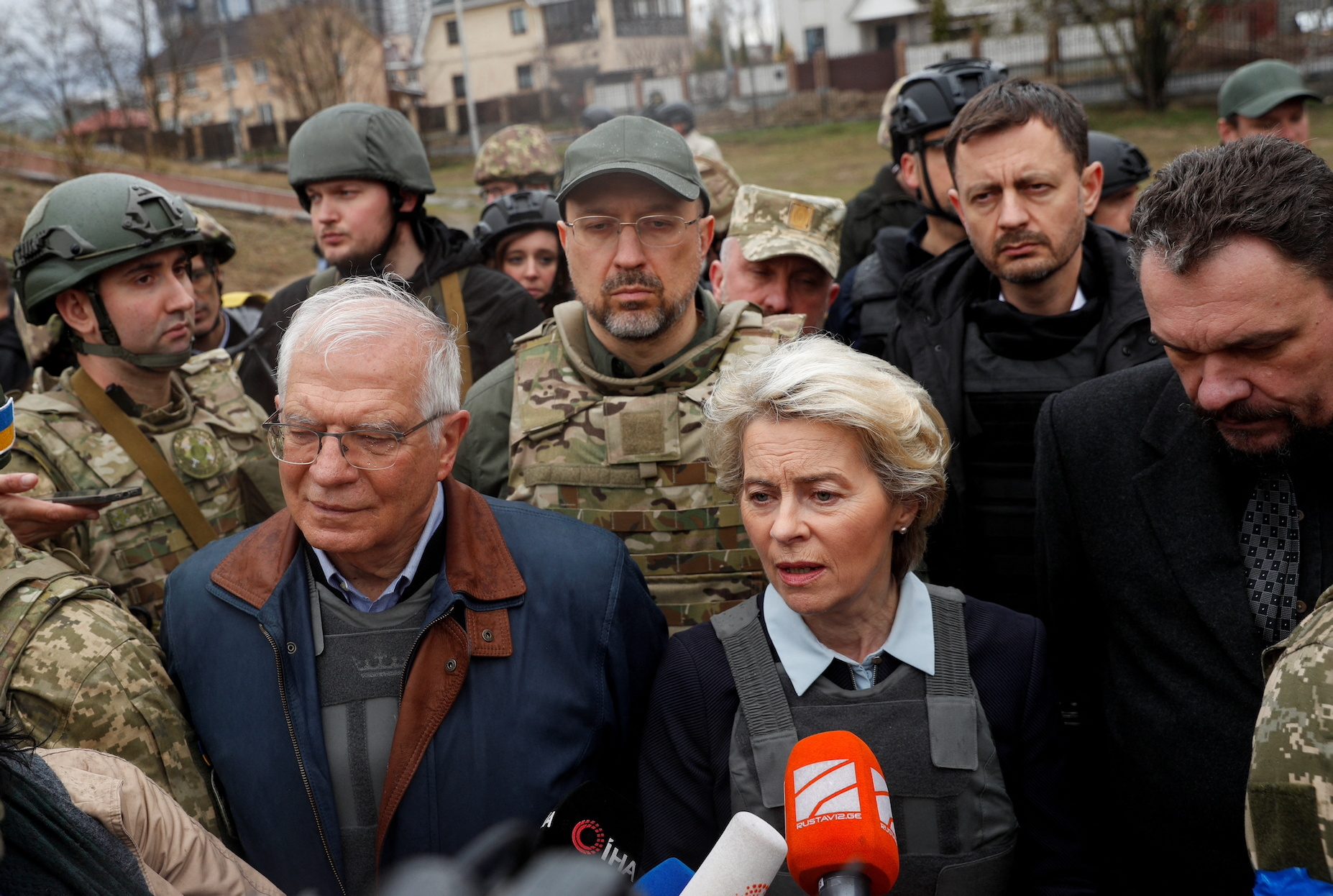 European Commission President Ursula von der Leyen and High Representative of the European Union for Foreign Affairs and Security Policy Josep Borrell talk to the media as they visit the town of Bucha, as Russia's attack on Ukraine continues, outside of Kyiv, Ukraine April 8, 2022.

Facebook Twitter Copy URL
Copied
During a visit to Bucha, European Commission chief Ursula von der Leyen looked visibly moved by what she saw in a town where Ukrainian officials say hundreds of civilians were killed by Russian forces

KYIV, Ukraine – European Commission chief Ursula von der Leyen said the deaths of civilians in the Ukrainian town of Bucha showed the “cruel face” of Russian President Vladimir Putin’s army, pledging to support Kyiv in its defense of the “border of Europe”.

During a visit to Bucha, where forensic investigators started to exhume bodies from a mass grave, von der Leyen looked visibly moved by what she saw in a town where Ukrainian officials say hundreds of civilians were killed by Russian forces.

Russia denies targeting civilians in its more than six-week war against Ukraine and has called the allegations that Russian forces executed civilians in Bucha while they occupied the town a “monstrous forgery” aimed at denigrating the Russian army.

Speaking to reporters in Bucha, von der Leyen, wearing a flak jacket, said the EU would do everything to support Ukraine to do “the necessary steps” to secure membership of the bloc – a demand Ukrainian President Volodymyr Zelenskiy has pressed.

“The unthinkable has happened here. We have seen the cruel face of Putin’s army. We have seen the recklessness and the coldheartedness with which they have been occupying the city,” von der Leyen told reporters in Bucha.

“The whole world is mourning with the people of Bucha, and they are the ones who are … defending the border of Europe, defending humanity, defending democracy and therefore we stand with them in this important fight.”

The images from Bucha, which was retaken along with other towns north of the capital as Russian forces withdrew to focus efforts on the east of the country, have prompted a renewed effort by Western nations to punish Moscow for the February 24 invasion.

As the EU leaders were about to arrive in Kyiv, as many as 50 people were killed and many more were wounded in a rocket strike at a railway station packed with civilians fleeing the threat of a major Russian offensive in the country’s east.

Von der Leyen’s trip to Kyiv was aimed at offering Zelenskiy moral and some financial support. Travelling by train from Brussels to Kyiv, she told reporters the most important message she was bringing was that there “will be the EU path” for Ukraine.

She pledged her support for Kyiv to “emerge from the war as a democratic country”, something, she said, the European Union and other donors would help with.

Josep Borrell, the EU’s chief diplomat, echoed the message, talling reporters the visit was a signal that “Ukraine is in control of its territory”.

“Ukraine is not a country invaded, dominated. There is still a government (which) receives people from outside and you can travel to Kyiv,” Borrell said, adding he hoped the EU would offer another 500 million euros ($543 million) to Kyiv in the coming days.

Zelenskiy says the war is a direct attack on not only Ukraine’s existence, but the security of Europe as a whole.

Russia calls its action a “special military operation” to demilitarize and “denazify” its neighbor. Before the invasion, Putin had presented Ukraine’s tilt in recent years to the West – including its aspiration to join NATO – as a threat to Russia’s security.

Zelenskiy has urged Brussels to do more to punish Russia, including banning purchases of oil and gas from the country, and has called on the EU to accept Ukraine as a full member.

Borrell said oil sanctions were “a big elephant in the room”, with some concerns that a move to cut out Russian crude could cause a spike in prices that would be painful to European economies. He said a decision on exports would be raised on Monday in Brussels. – Rappler.com