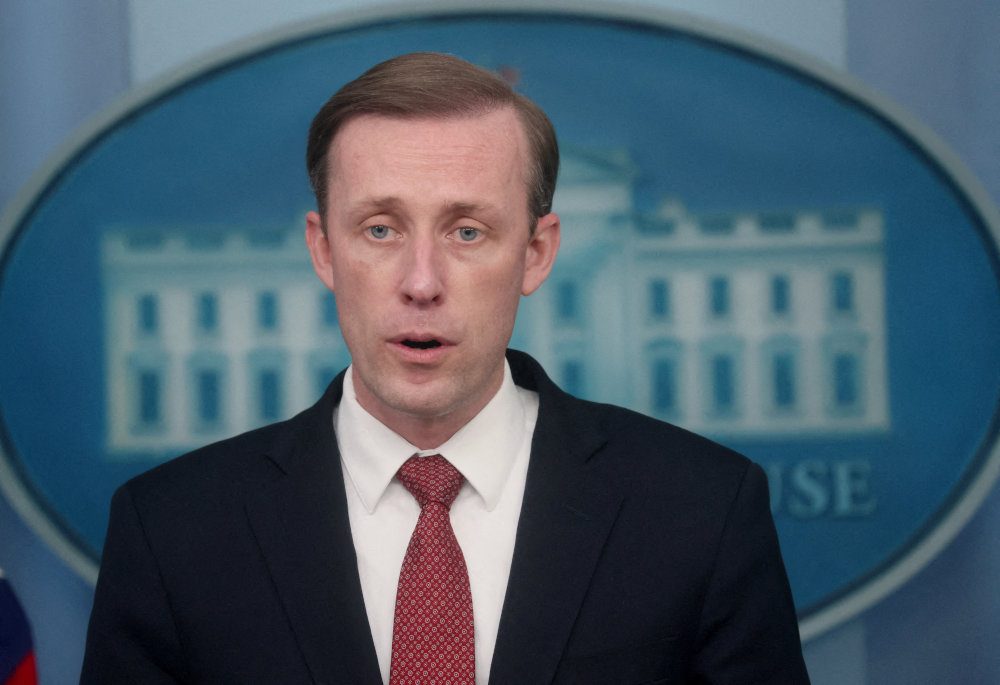 JAKE SULLIVAN. US White House National Security Advisor Jake Sullivan speaks to the news media about the situation in Ukraine during a daily press briefing at the White House in Washington, DC USA, on, February 11, 2022.

Facebook Twitter Copy URL
Copied
US National Security Adviser Jake Sullivan says, 'We will not allow that to go forward and allow there to be a lifeline to Russia from these economic sanctions from any country, anywhere in the world'

WASHINGTON, DC, USA – US National Security Adviser Jake Sullivan, who is due to meet with China’s top diplomat Yang Jiechi in Rome on Monday, March 14, warned Beijing that it would “absolutely” face consequences if it helped Moscow evade sweeping sanctions over the war in Ukraine.

Russia asked China for military equipment after its February 24 invasion of Ukraine, sparking concern in the White House that Beijing may undermine Western efforts to help Ukrainian forces defend their country, several US officials said.

Sullivan plans in his meeting with Yang to make Washington’s concerns clear while mapping out the consequences and growing isolation China would face globally if it increases its support of Russia, one US official said, without providing details.

He said China found the current situation in Ukraine “disconcerting” and added: “We support and encourage all efforts that are conducive to a peaceful settlement of the crisis.”

Liu said “utmost efforts should be made to support Russia and Ukraine in carrying forward negotiations despite the difficult situation to produce a peaceful outcome.”

Sullivan told CNN on Sunday that Washington believed China was aware that Russia was planning some action in Ukraine before the invasion took place, although Beijing may not have understood the full extent of what was planned.

After the invasion began, Russia sought both military equipment and support from China, the US officials said.

Sullivan told CNN that Washington was watching closely to see to what extent Beijing provided economic or material support to Russia, and would impose consequences if that occurred.

“We are communicating directly, privately to Beijing, that there will absolutely be consequences for large-scale sanctions evasion efforts or support to Russia to backfill them,” Sullivan said. “We will not allow that to go forward and allow there to be a lifeline to Russia from these economic sanctions from any country, anywhere in the world.”

The meeting, which had been in planning for some time, is part of a broader effort by Washington and Beijing to maintain open channels of communication and manage competition between the world’s two largest economies, a senior Biden administration official said.

No specific outcomes were expected, the source added, speaking on condition of anonymity.

Wang Huiyao, head of a Beijing think tank and adviser to the Chinese government, warned of “an escalatory spiral” in a column published in the New York Times on Sunday, and said China was “uniquely positioned to act as a neutral mediator between a Western-supported Ukraine and Russia” to end the war.

“Unpalatable as some in the West may find the idea, it is time to offer the Russian leader an off-ramp with China’s help,” Wang wrote.

US officials were skeptical about the proposal given China’s ties to Russia and its spreading of misinformation related to the war.

The United States on Saturday said it would rush up to $200 million worth of additional weapons to Ukrainian forces as they try to defend against Russian shelling in the largest war in Europe since World War Two.

Washington and its allies have imposed sweeping, unprecedented sanctions against Russia and banned its energy imports, while providing billions of dollars of military and humanitarian assistance to Ukraine.

Individually and together they have appealed to China, Gulf nations and others that have failed to condemn the Russian invasion to join in isolating Russia from the global economy.

Beijing, a key trading partner of Russia, has refused to call Russia’s actions an invasion, although Chinese President Xi Jinping last week did call for “maximum restraint” in Ukraine after a virtual meeting with German Chancellor Olaf Scholz and French President Emmanuel Macron.

However, Hu Xijin, former editor-in-chief of the state-backed Chinese Global Times newspaper, said on Twitter: “If Sullivan thinks he can persuade China to participate in sanctions against Russia, he will be disappointed.”

Washington and the Group of Seven advanced economies on Friday ratcheted up pressure on Russia by calling for revoking its “most favored nation” trade status, which would allow them to jack up tariffs on Russian goods.

Trade made up about 46% of Russia’s economy in 2020, much of that with China, its biggest export destination. – Rappler.com