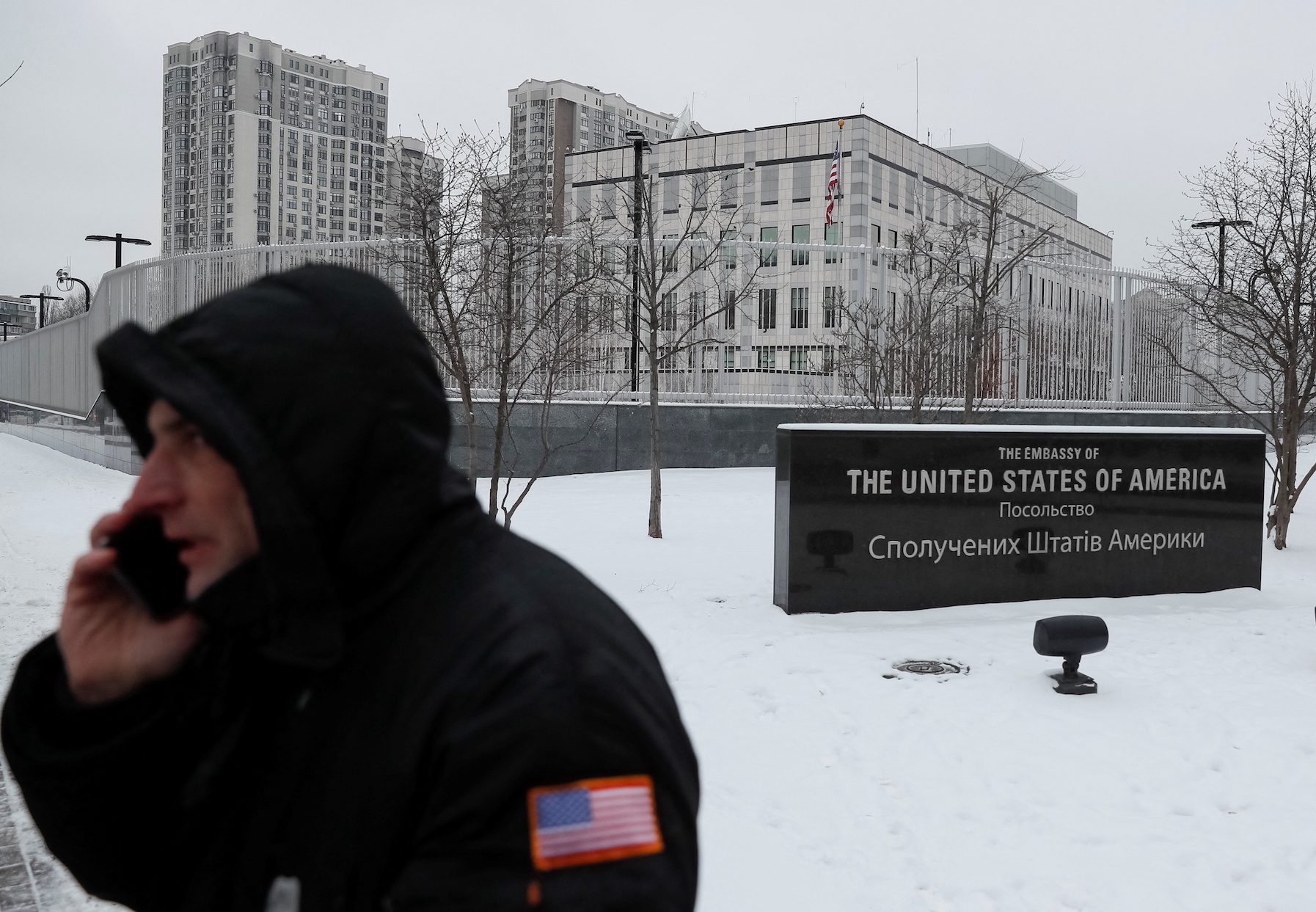 A security guard speaks on a mobile phone outside the U.S. embassy in Kyiv, Ukraine January 24, 2022. The United States said in a statement it was ordering the departure of eligible family members of staff from its embassy in Ukraine and said all citizens should consider leaving due to the threat of military action from Russia. REUTERS/Gleb Garanich

BRUSSELS, Belgium – The European Union called on Russia on Monday, January 24, to defuse tensions over Ukraine and reaffirmed that Moscow would face “massive” consequences if it attacked its neighbor.

The EU’s 27 foreign ministers, meeting in Brussels, said the bloc “condemns Russia’s continued aggressive actions and threats against Ukraine and calls on Russia to de-escalate.”

“Notions of ‘sphere of influence’ have no place in the 21st century … any further military aggression by Russia over Ukraine will have massive consequences and severe costs,” they said in a statement, giving no details of the “consequences”.

Russia has massed tens of thousands of troops near Ukraine’s borders. It denies planning an invasion but NATO said it was putting forces on standby and reinforcing eastern Europe – moves that Moscow described as “hysteria”.

Denmark said the EU would be ready to impose “never-seen-before” economic sanctions on Russia.

The European Commission, the EU executive body, proposed a 1.2-billion euro ($1.36-billion) financial aid package for Ukraine, but there are differences among EU member states about how hard to be on Russia.

Lithuanian Foreign Minister Gabrielius Landsbergis suggested Russia wanted to “splinter the West” and that the EU could not afford to be divided.

Asked about potential sanctions on the Nord Stream 2 pipeline from Russia to Germany, which is yet to win regulatory approval, Schallenberg said sanctioning something that is not yet operative was not a credible threat.

Another potential sanction would be cutting Russia off from the SWIFT global messaging system, but German Foreign Minister Annalena Baerbock said wielding the “hardest stick” may not always be the best way to deal with such a situation.

The EU has been largely sidelined by direct Russia-US talks, but the foreign ministers began talks with US Secretary of State Antony Blinken remotely on Monday.

“Russia should know, (President Vladimir) Putin should know that the price of using provocations and military forces to change borders in Europe will be very, very high… We are ready to undertake the most severe sanctions, also more severe than in 2014,” Danish Foreign Minister Jeppe Kofod told reporters.

He declined to say what sectors would be targeted.

The EU, along with the United States, imposed economic sanctions on Moscow targeting its energy, banking and defense sectors after Russia annexed the Crimean peninsula in 2014.

For now, the EU does not plan to withdraw diplomats’ families from Ukraine, its foreign policy chief Josep Borrell said after Washington announced such a move. – Rappler.com