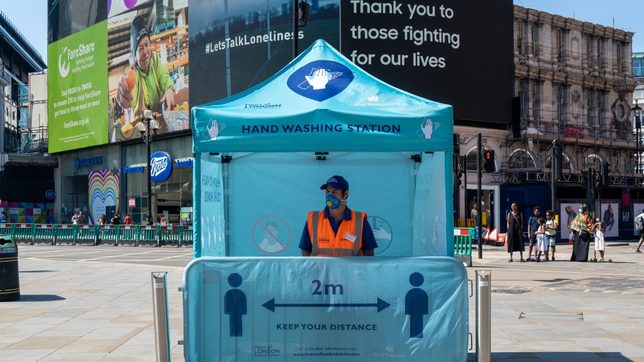 A man staffs a hand washing station in Piccadilly Gardens in central London on June 25, 2020. - Just days after lockdown ended and European travel restrictions were lifted, many were staying home in the cool as a heatwave hit the continent with temperatures touching 40 degrees Celcius. Britain was bracing for a flood of visitors to its beaches with the heatwave expected to last until Friday and temperatures set to climb into the mid-30s in the south and centre of the country. (Photo by Niklas HALLE'N / AFP)

Europe on Thursday, July 23, recorded more than 3 million coronavirus cases, as EU lawmakers examined a massive aid package for their pandemic-ravaged economies and the UN called for a basic income for the world’s poorest to help slow the spread.

The continent now accounts for a fifth of the world’s total cases of more than 15 million and remains the hardest hit in terms of deaths, with 206,633 out of 627,307 worldwide.

The European Parliament was meanwhile examining a massive recovery package hammered out at a hard-fought summit that saw fiscally disciplined nations oppose huge aid grants to coronavirus-hit countries such as Spain and Italy.

The 750-billion-euro post-coronavirus recovery plan is tied with the EU’s long-term budget.

“This moment, it’s my conviction, is pivotal in European history. We acted fast and with urgency,” Michel told the European Parliament.

“Europe’s response is greater than that of the United States or China,” to fight the coronavirus, which has ravaged the global economy and sent millions into dire poverty, he said.

The UN called for a temporary basic income for nearly 3 billion of the world’s poorest people.

Funding of $199 billion per month would provide 2.7 billion people with a temporary basic income and the “means to buy food and pay for health and education expenses”, the UN Development Program said.

“Bailouts and recovery plans cannot only focus on big markets and big business. A Temporary Basic Income might enable governments to give people in lockdown a financial lifeline,” said UNDP Administrator Achim Steiner.

UN projections have warned the virus could kill 1.67 million people in 30 low-income countries.

Signs are emerging in many parts of the world that the virus quickly springs back when lockdown measures are lifted.

Australia, Belgium, Hong Kong and the Japanese capital Tokyo had all used restrictive measures to successfully beat outbreaks earlier in the pandemic, but all are now facing an upsurge in cases.

Belgium on Thursday made masks mandatory in outdoor markets and busy areas. Anyone venturing out in Australia’s second-biggest city Melbourne was also ordered to wear a mask.

“These measures are not advice, they are orders,” Belgian Prime Minister Sophie Wilmes said of the move, which comes into effect on Saturday.

“Announcing a strengthening of the rules is a hard blow for our morale, but we’d prefer to take these measures today than to regret it tomorrow,” she said.

Announcing a strengthening of the rules is a hard blow for our morale, but we’d prefer to take these measures today than to regret it tomorrow.

In Melbourne, local resident Adam Ozmen added: “We should go to… whatever is necessary to just eliminate the thing and go back to what’s left of our normal lives.”

South Africa’s Medical Research Council has reported a 60% increase in overall numbers of natural deaths in recent weeks, suggesting a much higher toll of coronavirus-related fatalities in Africa’s worst-hit nation.

Paris, the world’s most visited city, was starved of tourists – the lifeblood of its economy – after being battered by a two-month COVID-19 lockdown.

But city attractions are seeing homegrown crowds, such as the Seine river cruise ships that are usually swamped by visitors from the United States and Latin America.

“Most clients are clearly French, with lots of families,” said a spokesman for the catering and facilities management group Sodexo, which operates the Bateaux Parisiens ships.

He said the chic Jules Verne restaurant on the Eiffel tower was booked solid every night in July, and nearly so for lunch, by locals.

“Before, you had to book a table 3 months in advance, which put off the French, but now it’s just one month,” he said.

Iraq on Thursday reopened its airspace after 4 months of lockdown while the Chinese Basketball Association said it will start allowing spectators from Sunday, in a major boost to sport in the country in the wake of the coronavirus.

The CBA on June 20 became the first league to return to action in China following a nearly five-month stoppage because of the pandemic.

The production of a vaccine is now key to ensuring a return to something close to normality.

More than 200 candidate drugs are being developed, with 23 having progressed to clinical trials. – Rappler.com