EXPLAINER: Why Ukraine’s southern Kherson region is a strategic prize 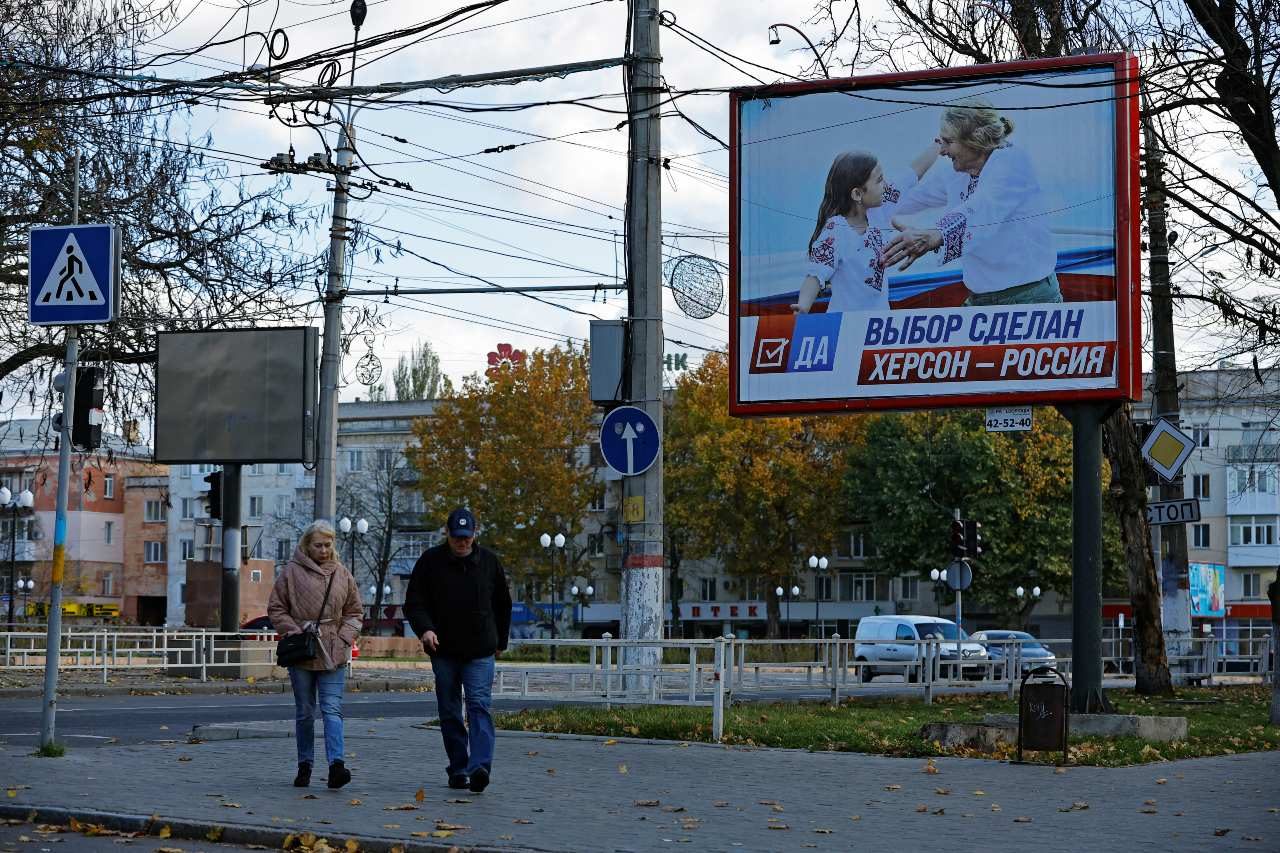 KHERSON. People walk along a street next to the banner reading 'The choice is made. Kherson is Russia,' in the course of Russia-Ukraine conflict in the city of Kherson, Russian-controlled Ukraine, on October 31, 2022.

KYIV, Ukraine – Ukrainian forces are piling pressure on Russian troops in the southern region of Kherson that Moscow occupied in February at the start of its invasion of Ukraine. Losing control of the region would be another big setback for President Vladimir Putin.

Here is why the region is strategically important for the course of Russia’s war in Ukraine. (LIVE UPDATES: Russia-Ukraine crisis)

Kherson region borders Crimea and provides Moscow with a land bridge to the Black Sea peninsula that it seized from Kyiv in 2014. Ukraine retaking swathes of Kherson region would deprive Moscow of that land corridor. It would also bring long-range Ukrainian artillery closer to Crimea, which Moscow sees as vitally important to its interests.

The peninsula, whose annexation Putin sees as a key achievement of his more than two decades in power, is home to a huge Russian military force and the Black Sea Fleet, which Moscow uses to project power into the Mediterranean and the Middle East.

After Moscow seized Crimea, Kyiv blocked water supplies via a canal from the Dnipro River. When Russia seized chunks of Kherson region and neighboring Zaporizhzhia region to the east, it immediately moved to unblock the canal to return fresh water flow. Russia needs that water for the local population, the irrigation of the peninsula’s arid land and for numerous military facilities.

Kherson region includes the mouth of the wide Dnipro River that bisects Ukraine, and the regional capital, Kherson city, is on the west bank, across the river from most of the rest of the province. It is the only place where Russia has a presence on the west bank of the river and Russia has heavily reinforced its troops there in recent months.

Ukrainian forces have been hammering the bridges over the river to hurt Moscow’s ability to resupply. If Russia were to lose its only foothold on the west side of the river, Ukraine would be better able to attack other Russian supply lines and challenge Moscow’s grip on other occupied parts of the south, such as Zaporizhzhia region where Russian troops occupy a nuclear power plant, military analysts say.

“The right (west) bank is important for both sides – for (Russia) in order to ensure the steadiness of the defense of the Zaporizhzhia direction, and for (Ukraine) to free this direction and cut off these three important arteries: the land corridor to Crimea, the water to Crimea and to return control of the (nuclear plant),” said Oleh Zhdanov, a military analyst.

The city of Kherson is to date the only regional capital that Russian forces have captured since the February 24 invasion. Losing it would therefore be a major symbolic blow to the Kremlin and indicate Russia had – for now – failed to press ahead to the cities of Mykolaiv and Odesa whose capture Moscow had sought, said Oleksander Musiyenko, a military analyst.

“It’s clear the loss of Kherson and the Kherson bridgehead will have consequences for Russia’s image and will be viewed negatively inside Russia,” he said.

The Kherson region, which had a pre-war population of more than 1 million, lies on the Black Sea. Recapturing it would help Kyiv wrest back control of some of the coastline to a sea that is a critical artery for its food exports to foreign markets.