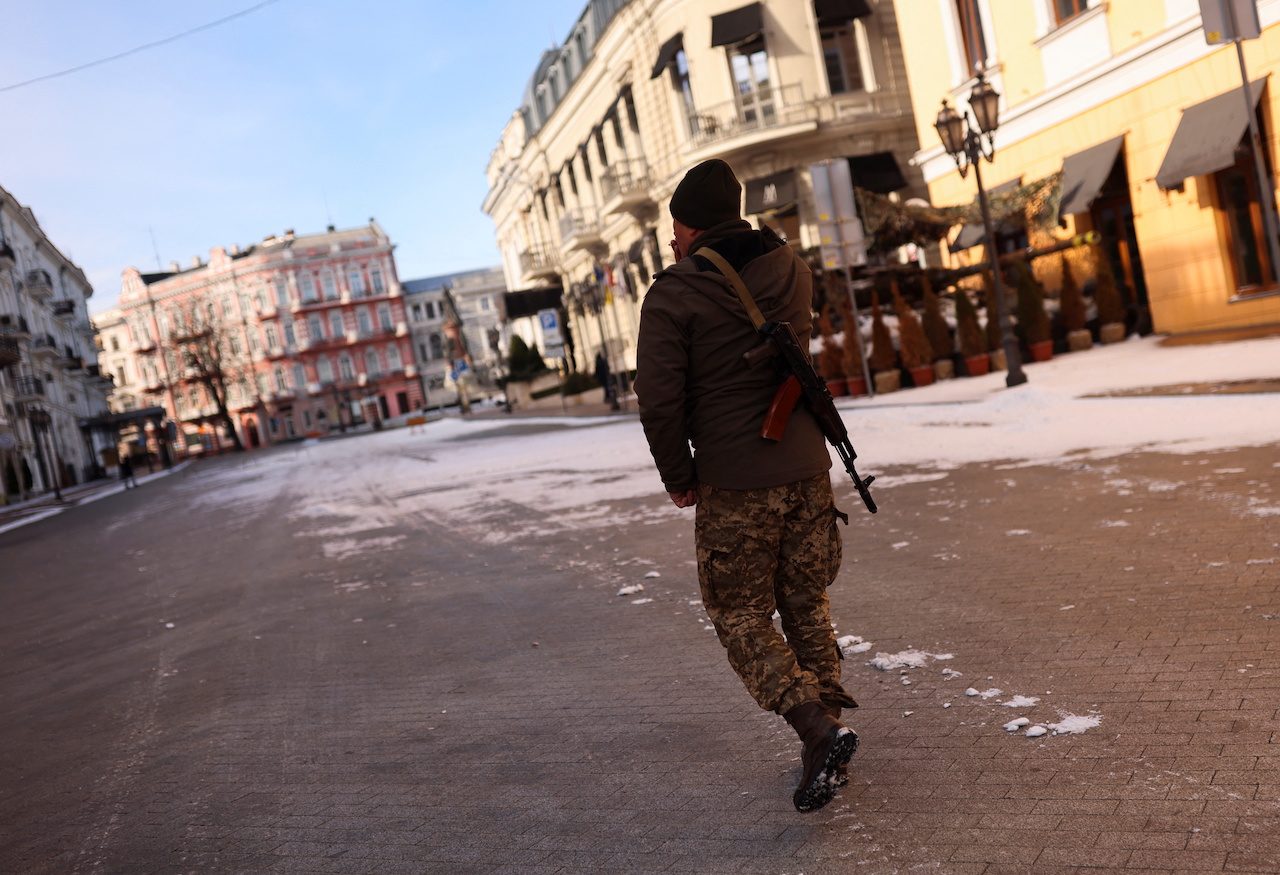 Ukrainian President Volodymyr Zelenskiy said Russia was sending in new troops after Ukrainian forces had put 31 of its battalion tactical groups out of action in what he called Russia’s largest army losses in decades.

He said 500-600 Russian troops had surrendered on Friday alone and that about 1,300 Ukrainian troops had been killed since the conflict began. It was not possible to verify his statements.

Zelenskiy also said he had spoken to German Chancellor Olaf Scholz and French President Emmanuel Macron about pressuring Russia to release the mayor of the city of Melitopol, who Ukraine says was kidnapped on Friday by Russian forces.

More than 2,000 residents of the southern city, which is now under Russian control, protested outside the city administration building to demand the release of the mayor, Ivan Fedorov, Kyrylo Tymoshenko, deputy head of the president’s office, said.

Russia has not commented on the fate of Fedorov, who Ukrainian officials said was kidnapped by Russian forces on false accusations of terrorism.

Scholz and Macron urged Russian President Vladimir Putin to declare an immediate ceasefire in a 75-minute phone call on Saturday, Scholz’s spokesperson said. The Kremlin said Putin had briefed them about the state of play in negotiations and responded to their concerns about the humanitarian situation.

Zelenskiy said the conflict meant some small Ukrainian towns no longer existed and that any negotiations must start with a ceasefire. Existing talks had begun to broach concrete topics rather than just exchange ultimatums, he said.

The Kremlin readout of the call with Macron and Scholz did not mention a ceasefire and accused Ukraine of using civilians as human shields.

Zelenskiy said Ukraine could not stop fighting but was upholding a ceasefire around an agreed “humanitarian corridor” out of the besieged southern port of Mariupol and called on Russia to do the same.

Putin launched the invasion on Feb. 24 in an operation that has been almost universally condemned around the world and that has drawn tough Western sanctions on Russia.

The bombardment has trapped thousands of people in besieged cities and sent 2.5 million Ukrainians fleeing to neighbouring countries. Ukrainian officials had planned to use humanitarian corridors from Mariupol as well as towns and villages in the regions of Kyiv, Sumy and some other areas on Saturday.

The governor of the Kyiv region Oleksiy Kuleba said fighting and threats of Russian air attacks were continuing on Saturday morning but later said some evacuations were proceeding.

“We will try to get people out every day, as long as it’s possible to observe a ceasefire,” he said.

“There are reports of looting and violent confrontations among civilians over what little basic supplies remain in the city,” the UN’s Office for the Coordination of Humanitarian Affairs said. “Medicines for life-threatening illnesses are quickly running out, hospitals are only partially functioning, and the food and water are in short supply.”

People were boiling ground water for drinking, using wood to cook food and burying dead bodies near where they lay, a staff member for Medecins Sans Frontieres (Doctors without Borders) in the city said.

“We saw people who died because of lack of medication,” he said, adding that many people had also been wounded or killed. “Neighbors just dig a hole in the ground and put the dead bodies inside.”

At least 1,582 civilians in Mariupol have been killed as a result of Russian shelling and a 12-day blockade, the city council said on Friday. It was not possible to verify casualty figures.

The exhausted-looking governor of Chernihiv, around 150 kms (100 miles) northeast of Kyiv, gave a video update in front of the ruins of its Ukraine Hotel, which he said had been hit on Saturday.

“There is no such hotel any more,” Viacheslav Chaus said, wiping tears from his eyes. “But Ukraine itself still exists, and it will prevail.”

Russian rocket attacks destroyed a Ukrainian airbase and hit an ammunition depot near the town of Vasylkiv in the Kyiv region on Saturday morning, Interfax Ukraine quoted Vasylkiv Mayor Natalia Balasynovych as saying.

Moscow has denied targeting civilians in what it calls a special operation to demilitarize Ukraine and unseat leaders it refers to as neo-Nazis. It has not responded to Ukrainian challenges to provide evidence.

Ukraine said it expected a new wave of attacks on the regions around Kyiv, the country’s second city Kharkiv and the Donbass region in the east, where Russian-backed separatists have expanded their control.

Britain’s defense ministry said fighting northwest of the capital continued, with the bulk of Russian ground forces 25 kms (16 miles) from the centre of Kyiv, which it has said Russia could attack within days.

Close Russian ally Belarus said it was sending five battalion tactical groups to its border with Ukraine but had no plans to send troops in to Russian forces fighting there.

Efforts to isolate Russia economically have stepped up, with the United States imposing new sanctions on senior Kremlin officials and Russian oligarchs on Friday.

European Commission President Ursula von der Leyen said the EU would on Saturday suspend Moscow’s privileged trade and economic treatment, crack down on its use of crypto-assets, and ban the import of iron and steel goods from Russia, as well as the export of luxury goods in the other direction.

Moscow said on Saturday the European Union would end up paying at least three times more for oil, gas and electricity. – Rappler.com