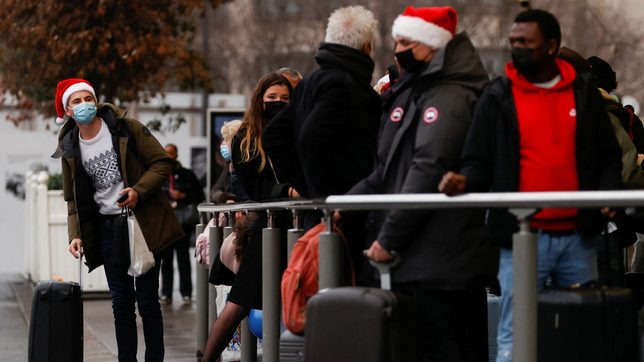 FRANCE. People wait for a taxi after arriving ahead of Christmas at Paris Gare de Lyon railway station, amid the spread of the coronavirus disease (COVID-19) pandemic, in Paris, France, December 24, 2021.

PARIS, France – France is seeing a “tsunami” of COVID-19 infections, with 208,000 cases reported over the past 24 hours, a new national and European record, Health Minister Olivier Veran told lawmakers on Wednesday, December 29.

France has been breaking infection records repeatedly over the past few days, with Tuesday’s 180,000 cases already the highest for a country in Europe, according to data on Covidtracker.fr.

“This means that 24 hours a day, day and night, every second in our country, two French people are diagnosed positive,” Veran said. “We have never experienced such a situation,” he said, describing the increase in cases as “dizzying.”

Global COVID-19 infections have hit record highs over the past seven days, Reuters data showed on Wednesday, as the new Omicron variant spread rapidly, keeping many workers at home and overwhelming testing centres.

The situation in French hospitals was already worrying because of the Delta variant, Veran said, with Omicron yet to have an impact, something he said would eventually happen.

“We have two enemies,” he said, referring to the two main variants. “As for Omicron, I would no longer talk about a wave. This is a groundswell, where several waves combine to form one massive wave,” he said.

The flu will further complicate things for hospitals, he added.

“I’m not ill, I just have a dry throat,” said Veran, who repeatedly coughed during the hearing, triggering nervous laughter from those sitting next to him.

While the government has ruled out a curfew in mainland France, on the Indian Ocean island of La Reunion, where the number of cases is particularly high, a curfew will be imposed from 9pm to 5am from January 1 to January 23. – Rappler.com