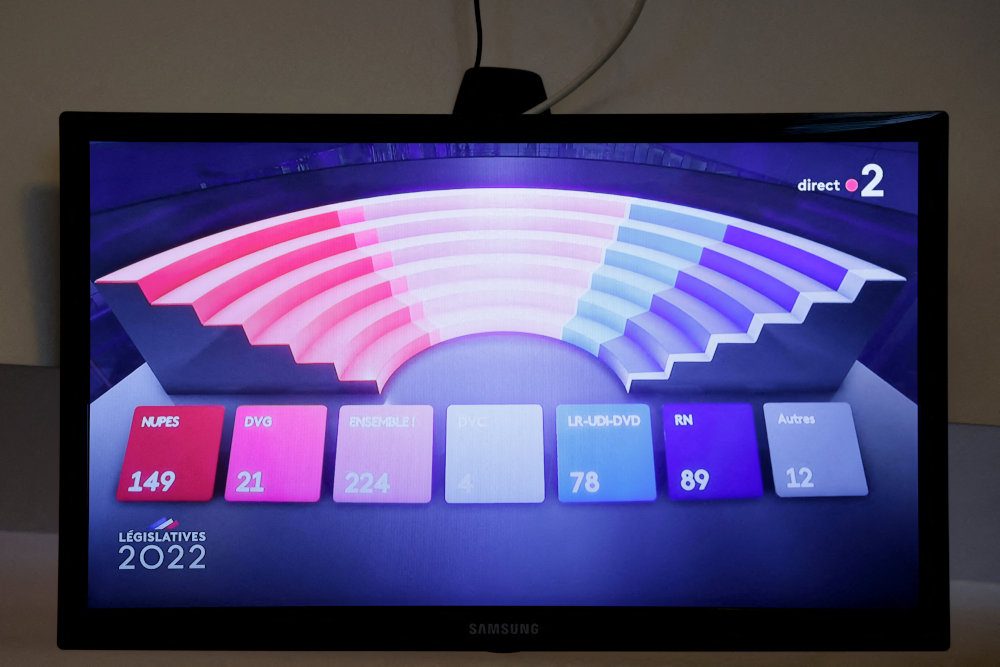 PARLIAMENTARY ELECTIONS. A picture shows a TV screen displaying the first results of the second round of France's parliamentary elections during the election evening at the Hotel Matignon in Paris, France June 19, 2022.

PARIS, France – French President Emmanuel Macron’s centrist camp scrambled on Monday, June 20, to seek support from parliamentary rivals in order to salvage some of his reform agenda and avoid political paralysis, after voters punished them in a legislative election.

While Macron’s “Ensemble” grouping secured the largest number of lawmakers in the 577-seat National Assembly, it fell well short of an absolute majority in a vote on Sunday, June 19, that saw a leftwing alliance and the far-right perform very strongly.

There is no script in France for how things should unfold.

“It’s going to be complicated,” government spokeswoman Olivia Gregoire told France Inter radio. “We’re going to have to be creative.

“What I fear most is that this country be blocked,” she added.

Macron himself has yet to comment on the election result.

One key question is whether he will try to strike a coalition deal with the conservative Les Republicains – who have for now rejected that option – or enter into messy negotiations with opponents on a bill-by-bill basis.

“We will try to bring others on board with us, especially to convince the few moderates in parliament to follow us,” Gregoire said, adding that Macron is set to reshuffle his government in the coming days.

If no agreement can be found, the euro zone’s second biggest economy faces political paralysis.

Parliament is fragmented, with a broad leftwing alliance and, diametrically opposed to it, the largest far-right group ever elected. If Macron cannot find enough support to make things work, France may face snap elections down the line.

A first major test will be a cost-of-living bill which Gregoire said the government will put to lawmakers in eight days, when the new parliament will sit for the first time.

Over the summer, proposals on renewable energy will test the solidity of Jean-Luc Melenchon’s broad leftist alliance, which is divided over nuclear power.

The vote was a painful setback for Macron, 44, who was reelected in April. In his second and final term, he wants to deepen European Union integration, raise the retirement age and inject new life into France’s nuclear industry.

Macron’s Ensemble alliance and Les Republicains have compatible platforms on economic matters, including pushing up the retirement age and promoting nuclear energy. Together, they would have an absolute majority.

But lawmakers from Les Republicans indicated they were not willing to jump on board just yet.

“Forget about this idea that there is some sort of imperative to choose between Emmanuel Macron and the extremists,” Republicans secretary general Aurelien Pradie told franceinfo radio.

“The Republicans’ position in parliament will be free and independent.”

Financial markets took the result largely in their stride, with little impact on the euro and stocks in early trading on Monday. French bond spreads saw some widening pressure.

“The hope that some foreign exchange traders placed in Macron in 2017 evaporated some time back, so that election victories or defeats do not play a major role for the euro exchange rates any longer,” Commerzbank analyst Ulrich Leuchtmann said in a note.

Macron’s victory in April made him the first French president in two decades to win a second term, as voters rallied to keep his far-right opponent Marine Le Pen out of power.

But, after a first presidential mandate marked by a top-down government style that Macron himself compared to that of Jupiter, the almighty Roman god, the president will now have to learn the art of consensus-building.

“Such a fragmented parliament will likely result in political deadlock, with a much slower reform agenda, possibly leading to vote of no confidence and/or a dissolution of the National Assembly over the coming year,” said Philippe Gudin of Barclays.

“This will likely weaken France’s position in Europe and endanger the country’s fiscal position, which is already weak.” – Rappler.com