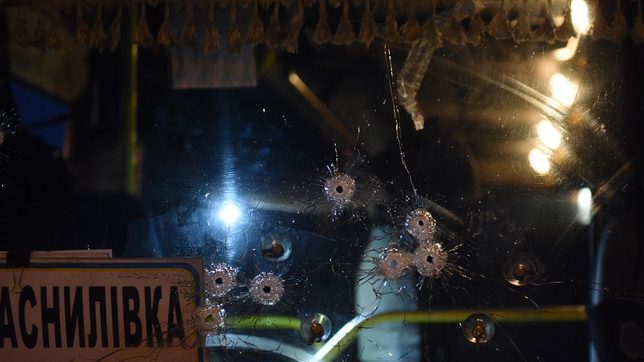 HOLES. Bullets holes in the windscreen of an intercity bus after police freed all hostages from the bus and arrested the armed man who held them for over 12 hours in the city of Lutsk. Photo by Dyachyshyn/AFP

Ukrainian police freed 13 hostages and arrested an armed man who held them on a bus for more than 12 hours on Tuesday, July 21, after the country’s president agreed to his demand to post a movie recommendation on social media.

The SBU security service said a joint operation had resulted in all the hostages being released unharmed after a police stand-off in the western city Lutsk with the man, who threatened to detonate an explosive device unless his strange requests were met.

The tense hostage situation seemed to be resolved swiftly after the man spoke on the phone with Ukrainian President Volodymyr Zelensky, who then recorded a short video, apparently meeting one of the man’s demands.

Three hostages were quickly let go, followed by the rest about an hour later.

Footage published by Ukrainian officials showed police escorting people as armed special forces stood over a man lying face down on the pavement near the bus with his hands behind his back.

The hostage-taker had earlier fired shots and thrown an explosive package into the street in the center of Lutsk, a city of over 200,000 some 400 kilometers (250 miles) from capital Kiev.

The man initially made contact with the police identifying himself as Maksym Plokhoy, a pseudonym which translates to “Bad Maxim,” police said.

He was identified as Maksym Kryvosh, 44, who had previously spent around 10 years in prison on various charges.

An account which was later suspended by Twitter had posts under Kryvosh’s name claiming he was armed, including with bombs, and demanding top Ukrainian personalities convey anti-establishment messages on social media.

President Zelensky apparently carried out one of the demands posted on the account when he recorded a Facebook video calling on people to watch the 2005 documentary film “Earthlings.” Narrated by Joaquin Phoenix, the film chronicles the harsh treatment of animals at the hands of humans.

Zelensky spoke with Kryvosh after a phone was handed to him, deputy head of Zelensky’s administration Kyrylo Tymoshenko told a briefing in Lutsk.

“He had a telephone conversation, speaking with him for 15 minutes, he convinced him to release 3 hostages,” Tymoshenko said.

The president later deleted the short video from his account.

“Today loved ones can hug everybody who languished all day on the bus with a gun pointed at them,” Zelensky  wrote after the crisis was over.

“We did not lose a single person,” added the president, a former TV comedian before his 2019 election win.

‘There was a threat’

“He really had a functioning pistol, an automatic rifle, he really had a grenade. There was a threat. But it’s all in the past,” Avakov said.

“A lengthy prison sentence awaits him,” he said, calling Kryvosh an “unstable man.”

Police earlier said there were 20 hostages, but it turned out there were only 13.

While a heavy security presence including armoured vehicles were around the immediate area, people walked the streets beyond the perimeter and shops were open, an AFP correspondent said.

The hostages were onboard the bus from around 9 am (0600 GMT) with no access to food or a toilet. They were given access to water many hours later.

The SBU security service pronounced the situation an “act of terror” and launched a probe.

Ukraine, which has been fighting Russia-backed separatists since 2014, has been struggling with a proliferation of illegal weapons.

Police in late 2017 stormed a post office in the eastern city of Kharkiv, where an armed man claiming to be strapped with explosives captured 11 people. – Rappler.com